The third race of the season for the National Flying Club was held on the 3rd of July from the island of Guernsey. A total of 635 members entered 6693 birds which were liberated at 12:45pm into sunshine and a 15mph South South West wind. The weather and visibility in the channel was clear with the morning rain showers along the south coast clearing as the birds travelled onto the mainland. The overall winner was Fred Hall and Daughters in Worthing with the birds doing a faster velocity than most expected on the day. 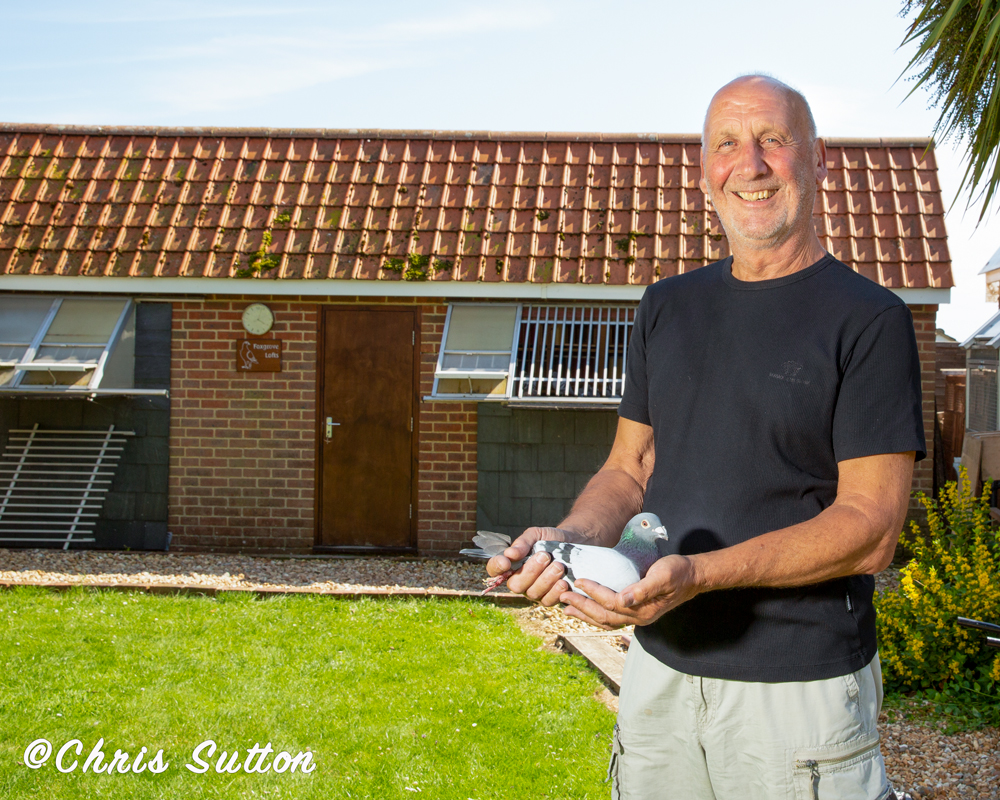 Fred had been busy making ready for the arrival of his pigeons and was feeding the fish in his ornamental pond when he saw a pigeon arrive and rush straight through the trap. His initial thoughts were that it must be a last arrival from a previous race when to his surprise his ETS clock indicated it was a Guernsey pigeon doing an average velocity of 68mph, which was a speed he did not expect, and he was thrilled to add a fifth National win to his CV. 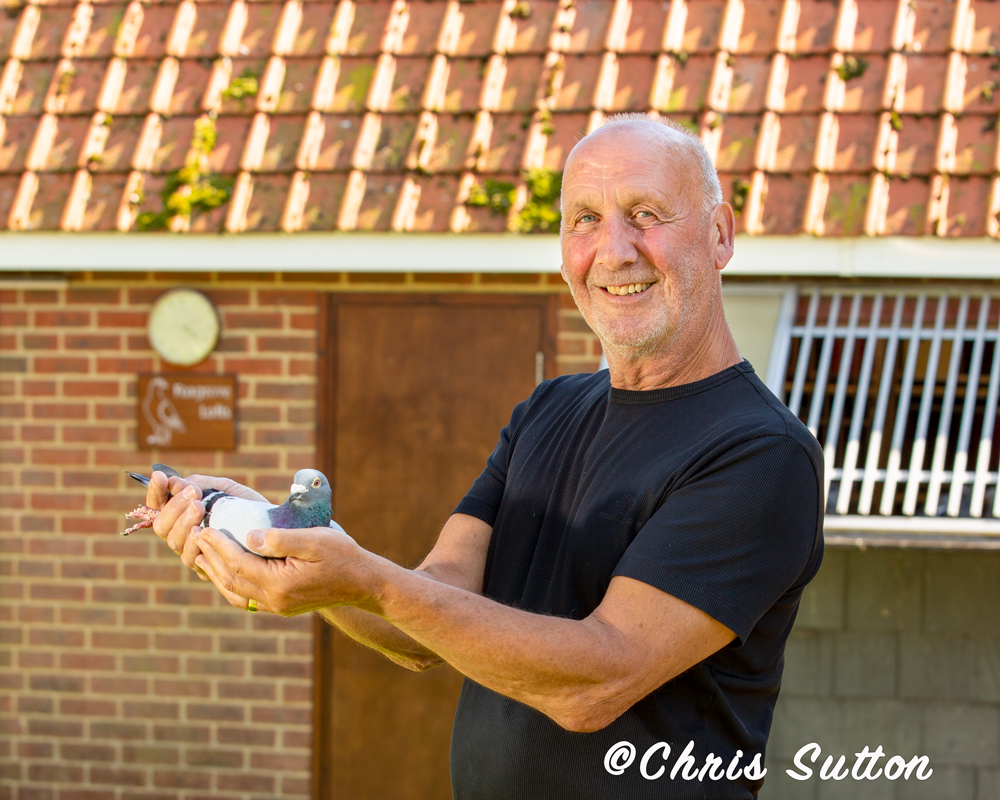 His list of illustrious National and Classic wins began in 1998 when Fred added his name to the most prestigious Kings Cup from Pau which is a distance of 518 miles, in the NFC Grand National. In 2004 he won first and second Open BICCfrom La Ferté Bernard and in 2007 he won the National Flying Club again from Alençon with “FoxgroveBlacknight” followed with another BICC national win in 2017 in the Agen International being 63rdout of 24,000b International with “FoxgroveCarteus”.

Now called “Foxgrove Missile” the Guernsey winner is a yearling widowhood cock which is just one more fantastic pigeon being the result of a long established relationship with Peter Fox of Syndicate Lofts. In 2003 Fred and his pal Steve Radcliffe from Liverpool, bought a pair of pigeons from Peter that would become known as 'The Good Pair', which is really an understatement as they are responsible for countless winners for them over fifteen years at all levels. Just two weeks ago a grandson of the Good Pair won 2nd section, 23rd Open NFC Sennen Cove against 5738 birds which had previously won 1st Premier 100 Club from Coutances and Fred can add two combine wins to his list of achievements with these birds. 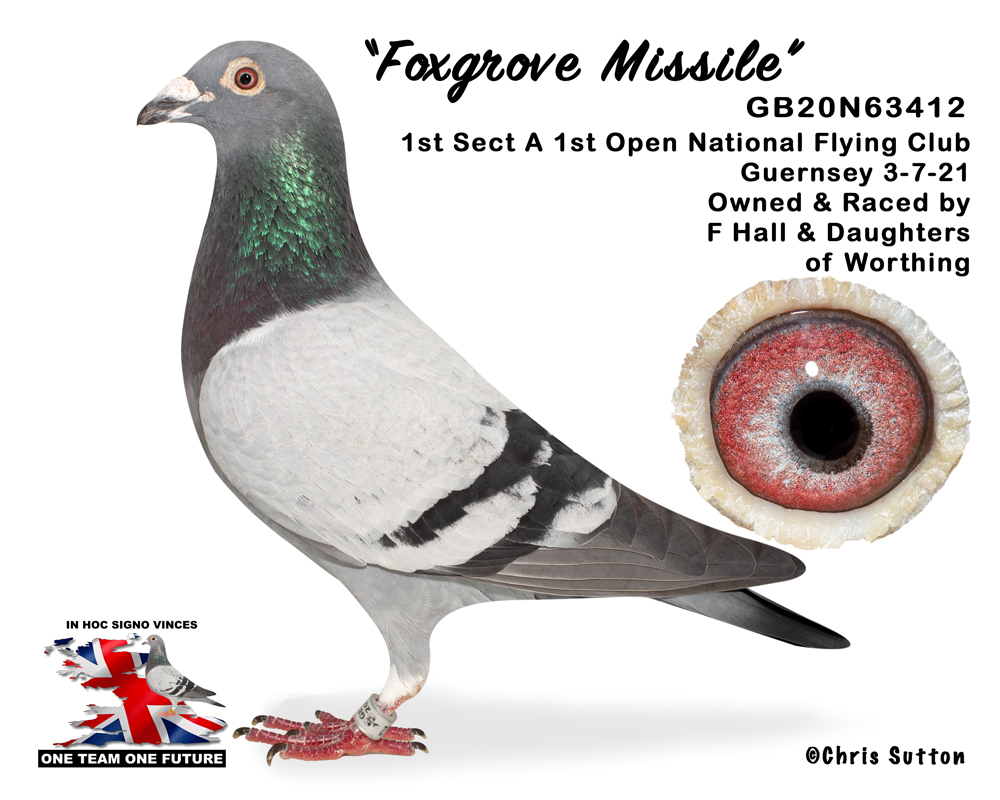 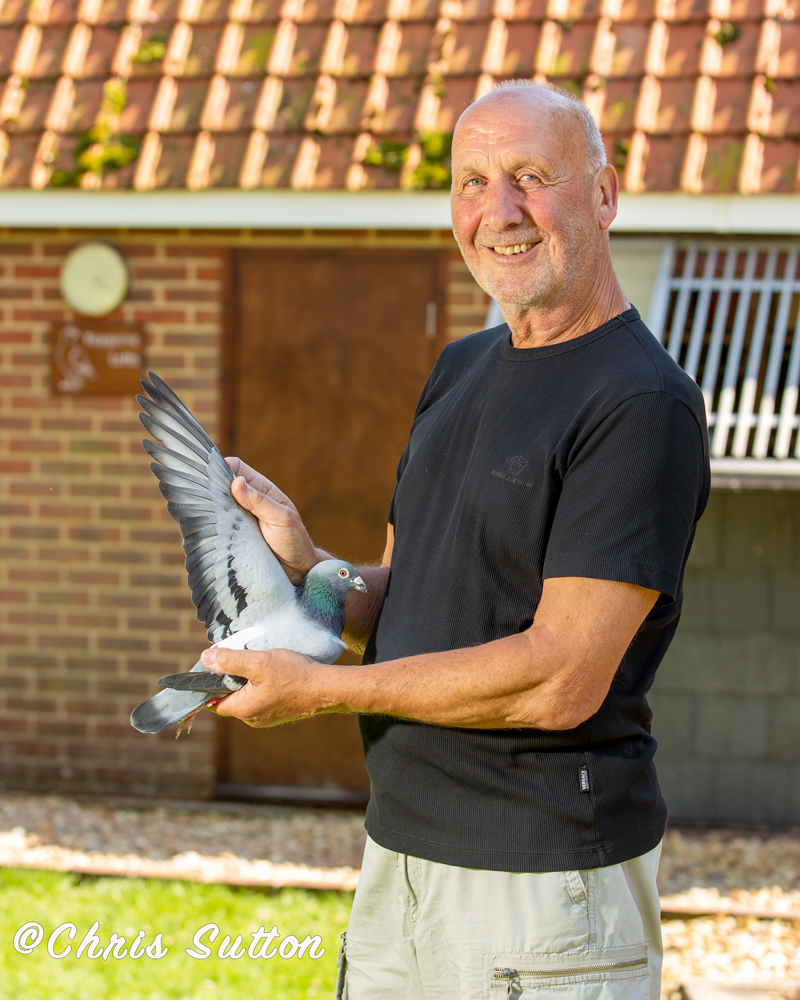 As has become synonymous with Syndicate Lofts, the “Good Pair” are a classic example of world class pigeons being blended together to produce a continued line of outstanding winners. The cock of the Good Pair was bred from “Hannibal”, well known breeding son of Dirk van Dyck's “Kannibaal”, when he was coupled with “Martha” bred by Flor Vervoort and a sister to “Den Aske” the OlypiadeAsduif and grandchild of the world renowned 'Fieneke 5000'. The hen of  “The Good Pair” was bred from “Figo” a top class Hofkens cock bred by Verheyen and daughter of “Merksplas” coupled with “Golden Nugget” a daughter of 'Ikon' which was bred by Mike Ganus of the USA.

All the cocks at Foxgrove Lofts are raced on the classic widowhood system being paired around late December to rear a pair of early youngsters, then separated and repaired to sit for 10 days just before the season begins. Training to gain fitness is done during those 10 days before all hens are taken away, and the bowls turned upside down for the cocks to begin on the widowhood system. Fred said it was important that the bowls are turned over, as the hens are never shown before the race so turning them right side up for 10 minutes at basketing, keeps them calmer and is enough to let the cocks know there is something to race home to.

He feeds the old VanHee System of feeding widowhood cocks with Countrywide Red Star Plus and Super Widowhood mixed together 50/50 for racing, plus a high protein mix on their return and the following day. Depurative is given at the beginning of the week with at least three days of good food to build them up for the next race. He has been feeding Countrywide mixtures for the last few seasons and said their mixes are high quality, consistent and the health of the birds is optimal. In the water he uses Tollyamin Forte vitamin supplement from Tollisan Schroeder for three days with Lemon and Honey in the water on their return from a race.

Once the final result for Guernsey 1 has been completed, I shall follow up this winners report with the full section report and we can all look forward to Guernsey 2 due to be held on the 17th July. It is with regret that the last race of the old bird season due to be held on the 31st July will now be cancelled and the Grand National for 2021 will not take place. We had been holding out in the hope that we could race from San Sebastian, but the decision maker on the Spanish side went on annual leave without giving us his verdict. The race date had already been moved back towards the end of July to allow for any delays but with young bird racing already taking place by then, combined with the lack of the Grand National, the Committee voted, and it was decided it would be in the best interests of the club to cancel the race altogether.