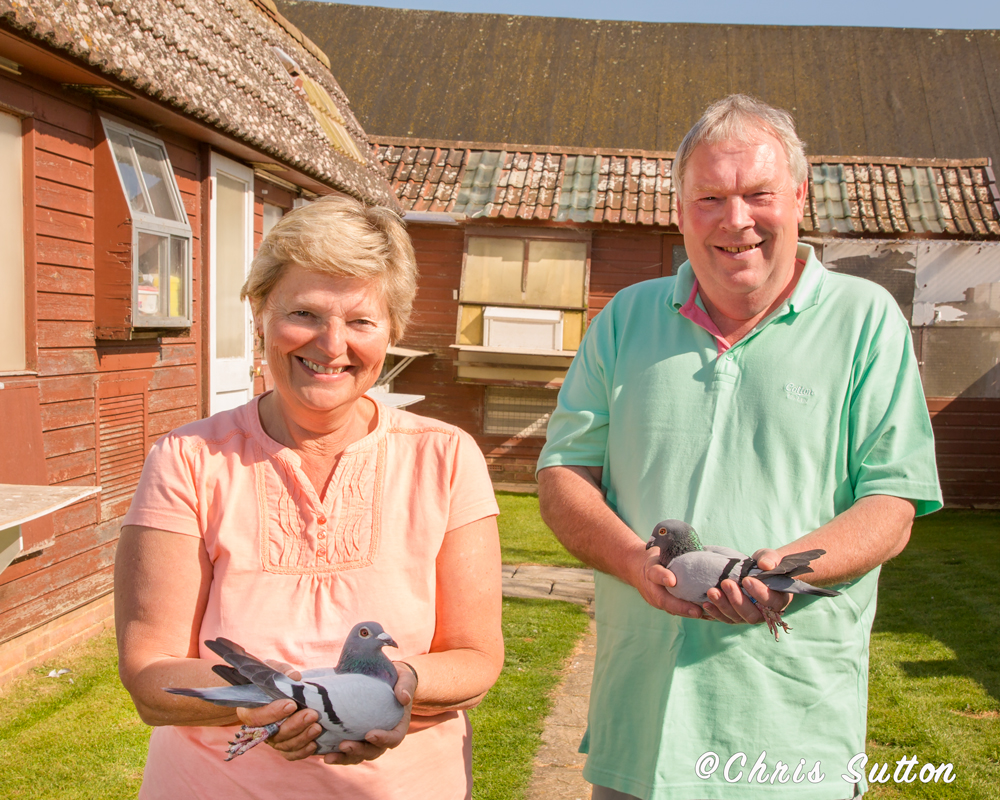 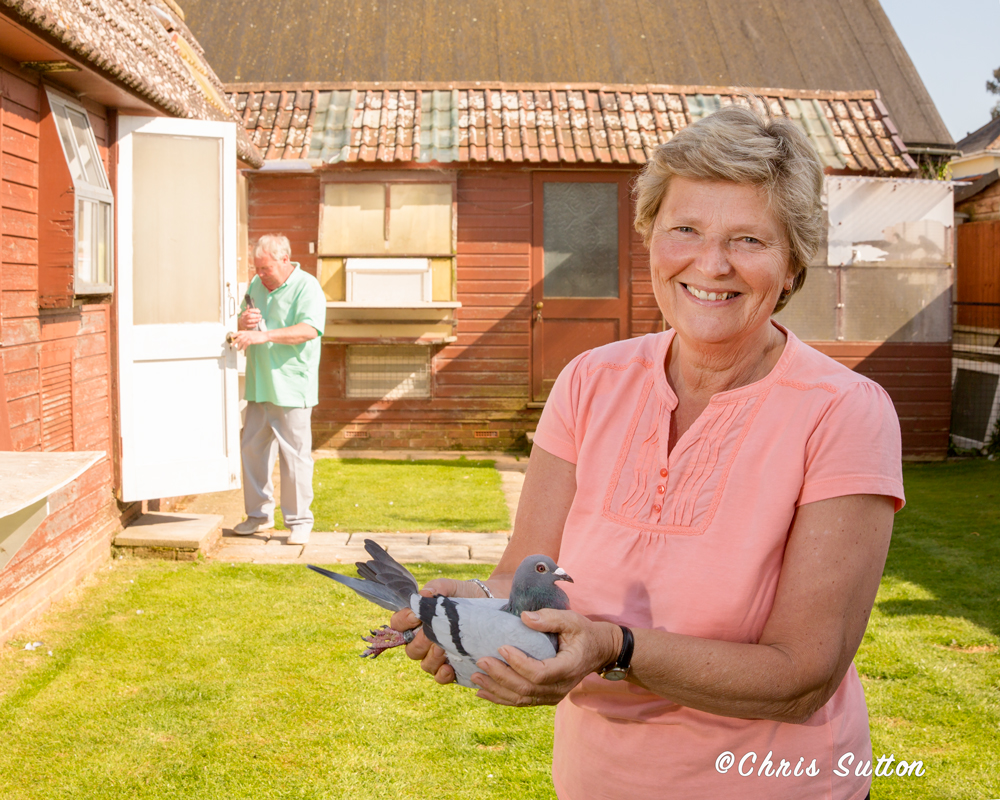 Mel had always been interested in pigeons as a boy but did not have the facilities at his childhood home so used to watch his neighbours and visit surrounding lofts, but as soon as he and Sue were married it was not long before pigeons also bonded the couple as a racing team. Whilst at work one day Mel noticed an injured racing pigeon carrying his wing as if it was broken and took it home to see if his friend, who raced pigeons at the time, could help him nurse it back to health. The owner was contacted and was happy for him to keep it as his friend had now given him a hen to go with it, and a pigeon loft was being built in their back garden.

In 1983 they began to race the widowhood system and in 1987 they had won their first National but the hurricane in 1987 left their loft almost dismantled and leaning so it became evident that they would need to build a new loft but this time specifically to suit the widowhood system. He studied successful lofts and in 1991 he built the loft that they still race to today, with three sections housing eight cocks each and one section with twelve.

In the ’80’s Mel had gone on a loft visits in Belgium and during a conversation the name of Gabby Vandenabelle cropped up as one of the best lofts to obtain pigeons. On further enquiries Mel discovered a two year waiting list so he did not pursue it at the time but after a few seasons he noticed that M & D Evans had them and they were living up to their reputation and he acquired some from them. This became the nucleus of their National winning family and although they have made some introductions over the years, it has always been from top winning lofts which also have the Vandenabelle bloodlines, as they actively seek out a related cross. Their winner from NFC Coutances is one such related cross with a daughter of their direct “Shadow Hen” who is now responsible for five of their national winners, when paired to a P & D Hofflins pigeon via Robert Rome.

Their Vandenabelle family have bred some fantastic pigeons for them over the years and now their stock loft mostly contains their own tried and tested winners, which will perform at all distances right out to Tarbes. When I asked them what was left for them to achieve Mel stated that they will continue to keep trying to win Nationals but with the main aim of winning Tarbes Grand National, although he would not sacrifice his whole season just for one race, hence they also have a smaller loft holding twelve pairs that are loosely raced on the roundabout system, with the aim to set the hens up for the Grand National from Tarbes. In fact, in 2016 they were 1st section C, 5th Open from Tarbes taking their total of four section wins from the NFC Grand National race to date. When asked which system they preferred, Mel quickly said classic widowhood, as they can go through the whole season in top form and the hens come into form later, which is further increased by them being paired for the very first time on the 1st of June, thus going to Tarbes sitting a small youngster. The widowhood team however are paired at the end of January and are allowed to rear two youngsters. When they are 14 days old the hens are removed and the cock continues to rear them alone, which bonds them solidly to the box.

Early season training consists of just one toss from 10 mile and one from 20 then into the first races, although the cold weather this season and an illness meant they were 3 or 4 weeks behind the normal schedule. The number of pre-season training tosses have reduced over the years due to the growing population of birds of prey in the area and it is far safer to just give them loft exercise these days. Mel said that they can loose more from training than racing and when they do train them he releases them in the sections of eight birds to minimise the risk to the whole team. A Falcon strike can cause panic, with birds crashing into trees etc in order to avoid capture and a larger release of pigeons could injure more of his team.

Once racing begins they are let out for exercise twice per day and they fly really well around the loft. The widowhood system suits them because the cocks are resting when he is at work and if he is late home for any reason, Sue will take over. Sue normally takes care of the young birds and will help Mel with cleaning or training etc. She is just as immersed as Mel with the pigeons and involved the local club as Race Secretary.

The widowhood cocks are fed in a communal trough, although a food pot is in each and every box. Mel likes them to feed together so they get used to competing for the space and will not be too shy when spending time in the race baskets. The pots in the boxes are used when they return from the race whilst fastened in with the hen, or for any extra feed the day before marking for the race. They are fed a light mixture upon return but the super widowhood mix from Country Wide is used for the rest of the week. Mel used to break them down early in the week but now just feeds the same every day.

Two weeks before the first NFC race, the team was sent to Coutances and this really set up his team as their fitness grew. The winning cock showed his form by being more mischievous around the loft, clapping around and would not enter the loft until all the others had gone in. He noticed the bird had gone to an extra level of form and thought he would have a good race, although sometimes this can be subtle and only realised after the race, it is something to look out for. He has a full wing and Mel said that although he used to think they were at their peak of form after throwing their second flight, he now discounts this as his birds can hold their wing moult right through the season and still win.

The hens are not shown to the cocks before they go to the race, they are just allowed a few minutes with the nest bowl and on return he leaves them with the hens until the last one is home, although sometimes, if they have to go to the club for clock strike late in the afternoon, everything is cleared away before they leave, even if one or two are not home in time. When the birds land from the race they have to go over the ETS pad which is situated just inside the loft behind two small openings and into a small corridor, with the sections being dowelled. The floor is a tight wire grid and when I visited, the birds were lounging around with the windows wide open relaxing in the sun and were very content.

Over the years Mel and Sue have named their winning pigeons on the theme of Greek Deities and over the years have used most of them up, but this being a mischievous bird he has earned the name “Stourcrest Momus” after the Greek God of Satire. He was raced up to 250 miles as a yearling and Mel knows that his pigeons reach their full potential after the yearling stage, a knowledge which comes after cultivating his own family for generations. The young cocks are chosen by bloodline and consistency before going into the widowhood loft and although the yearlings can be a little crazy for the first two or three races, Mel says they settle down to learn the system for the following season.

They race in the Dorset Federation which averages 900 to 1500 birds each week, which for a rural location and with fanciers well spread out, is good for the birds to gain experience. Being so close to the coast they know that from the shorter channel races they have to hit land on a direct line for the loft but as the distance increase he does not think it matters so much, as the whole convoy breaks down into smaller batches. Young birds can occasionally go past on either side depending on the wind direction and there is a lot of country behind them, so they soon find the better birds.

I was right to be excited about this loft visit, the welcome was very warm, they held nothing back and Mel answered all my questions gladly. They are both just as thrilled to win their eighth national as if it was their first and I have no doubt, that with their wonderful team of pigeons, together with their mutual dedication, it will not be their last. 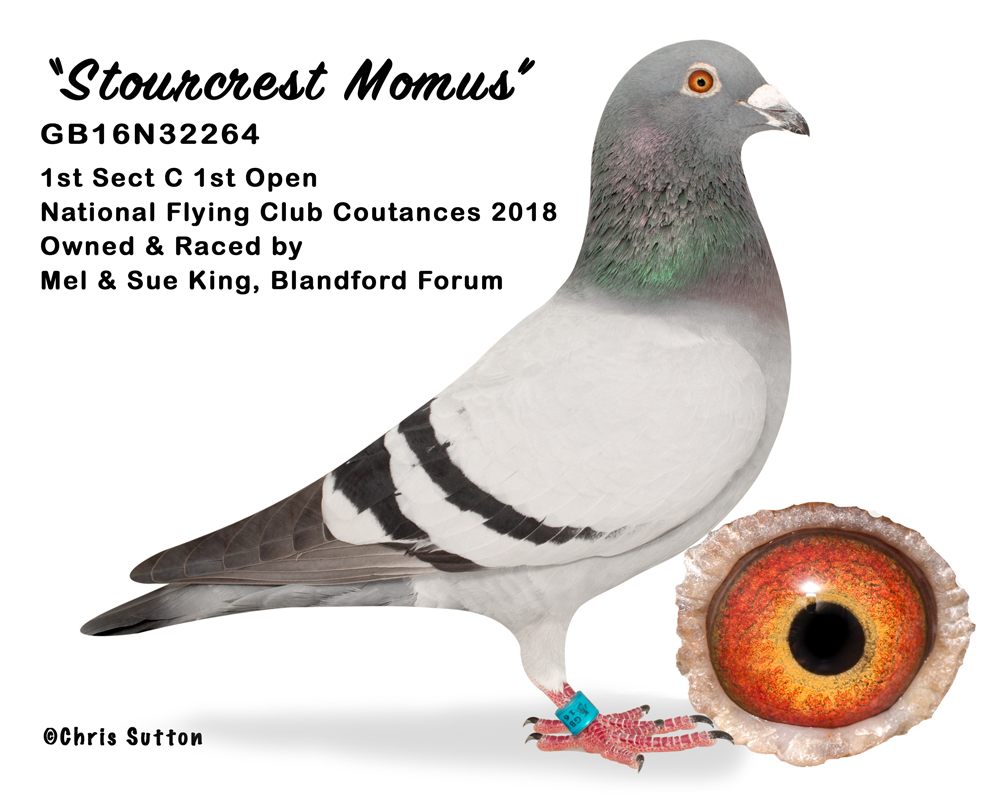 A full representation of the race and section winners will follow next week. The first race of the season for the National Flying Club in the UK from Coutances began with clear blue skies and a light north easterly wind and after a few hours the online verifications were appearing on the result. But unfortunately, the file server at the Secretaries office decided to give up the ghost which meant the telephone verifications were postponed for a while before also appearing on the provisional result, which delayed the announcement of the outright winner for a day or two. I am very grateful for the assistance given to me to compile my section reports which should mean greater coverage for their sections and we can gain from their local knowledge.