at 6am from Messac, in a gentle 3mph North wind with clear skies and about 11 degrees Celsius. The winds in France were very light and variable, turning a light North Easterly before a westerly as the birds got to the Channel beaches leaving France. Winds in the UK itself varied in direction with speeds of only 4 to 7mph but mostly westerly in direction and apart from the longer flyers in section N, who encountered a line of thunderstorms, a great race ensued.  Indeed the champagne club in Plymouth were celebrating yet again on Saturday evening because Terry Luscombe won the National Flying Club race from Messac, thus becoming the tenth National win amongst the members. 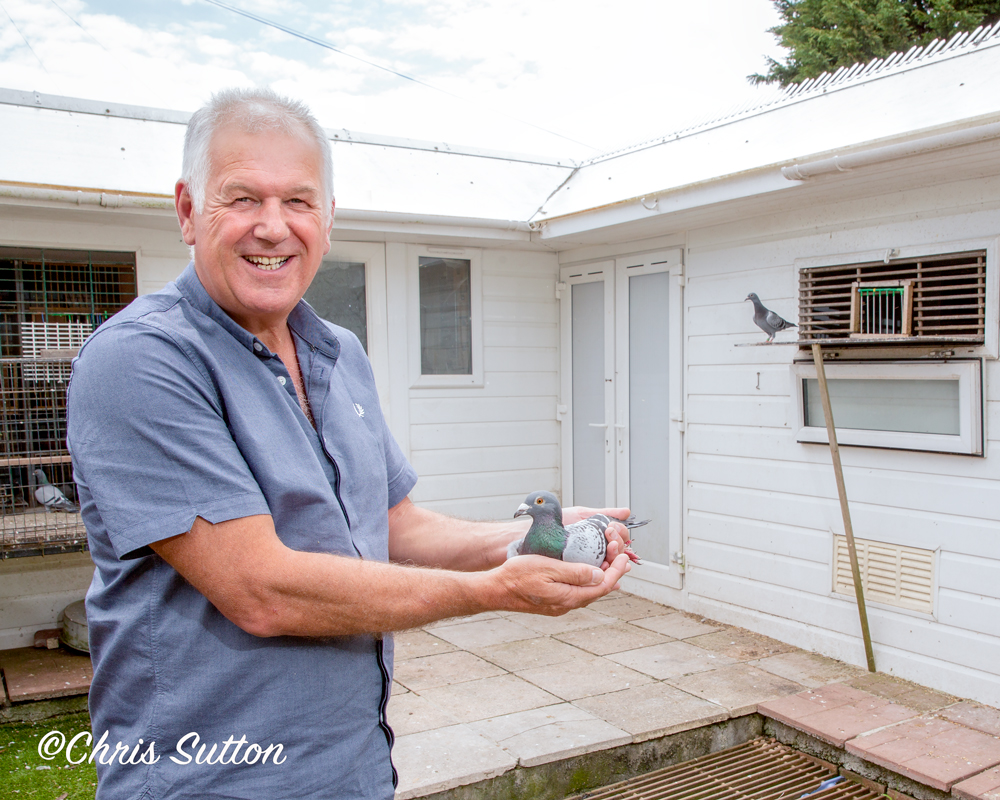 Times had recently changed for Terry, as he had decided to leave his business partners of many years, bought a static caravan in Millendreath near Looe in Cornwall and relinquished his many roles in the pigeon administration to take a more relaxed approach to life. A friend had different ideas though and a new business venture was offered last December which he accepted. Growth of the business over the last 6 months has been rapid which has taken up his time although he does make a weekly visit to the caravan with his wife. For this season he did plan to race his birds on the Roundabout system but a bad toss from Exeter resulted in him losing nearly half his team just before racing began, along with his workload increasing, he was considering giving up the pigeons so he changed his plans and let them pair together on open hole to race them natural.

For the Whitsun Bank holiday, he did not send to the club race and went with his wife Ann, along with new baby granddaughter, to the caravan for the weekend. The pigeons were now settled into the natural nesting cycle, been fed the previous seven days on diet mixture whilst sitting and taken along with them for yet another “double up” training toss from Cornwall. The liberation times were recorded and upon return he could see that some birds did not register their arrival until as late as 8pm from a morning toss. He assumed they must have been scattered by a falcon yet again, but as all were home his NFC race team could be prepared. Monday evening, he began feeding Gerry Plus and from Tuesday onwards he added Energy Mix and Peanuts. Terry said he used Peanuts quite a lot and would scatter some in the basket as they were collected by Chris Williams to go to the marking station.

On the Saturday morning of the race, Terry (who has a reputation for being busy and missing the pigeons) received a phone call from club mate Terry Dyer who said to him “make sure you do not miss them today, this could be the day you win the National” so he decided that whilst he was waiting he would wing stamp the young bird team. As he stood outside the loft he heard a flutter of wings and a thump on the landing board. It was way sooner than he expected but the bird preened himself up and went over the pad to record his arrival, showing it was one from the national. After verification he sat down to watch his other pigeons arrive when John McClements called to congratulate him. “what for?” Terry asked “you are currently top of the result”, came the reply and a very anxious few hours followed as they watched the rest of the birds being timed further up the country. It became clear, as the day went on, that the rest of the convoy would not be getting faster than 1500ypm so they had a countdown, a big cheer and the Champagne club were happy to continue tradition by purchasing yet another bottle.

The winning pigeon, now called “Jessie’s Pride,” is German rung although its bloodlines are Belgian via Flor Engels and Dirk Van Dyke. He had suffered a hawk strike two week previous which resulted in him having some tail feathers missing, but this did not faze him, “they have become streetwise now” said Terry, “they are constantly on the lookout.” 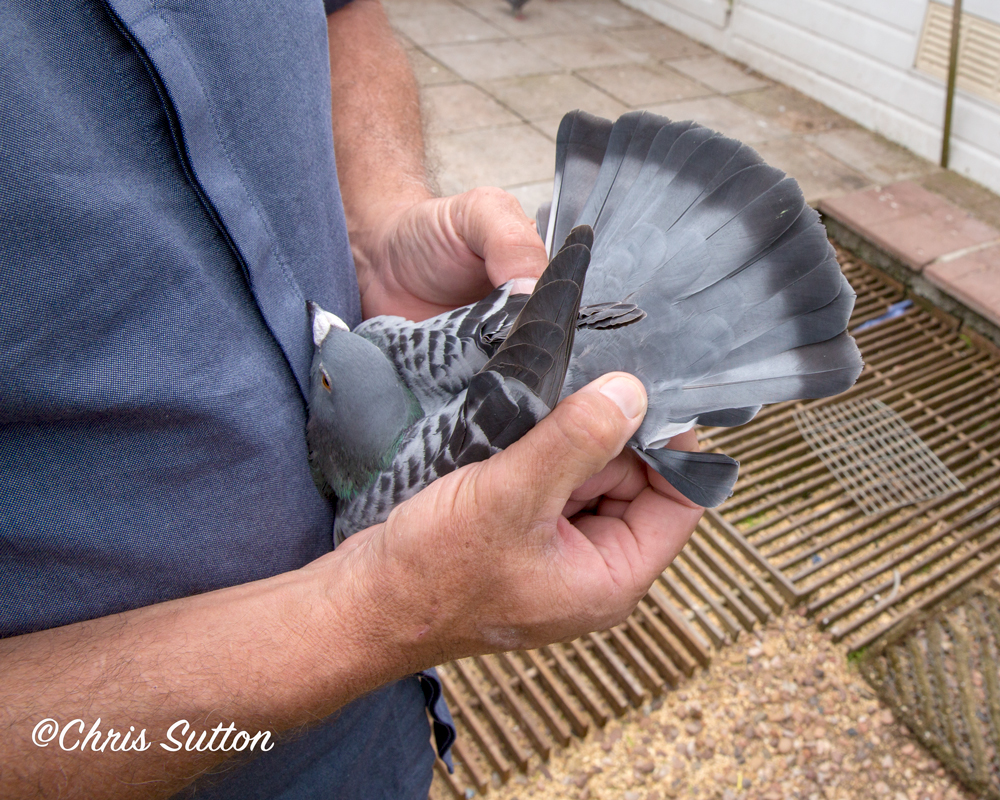 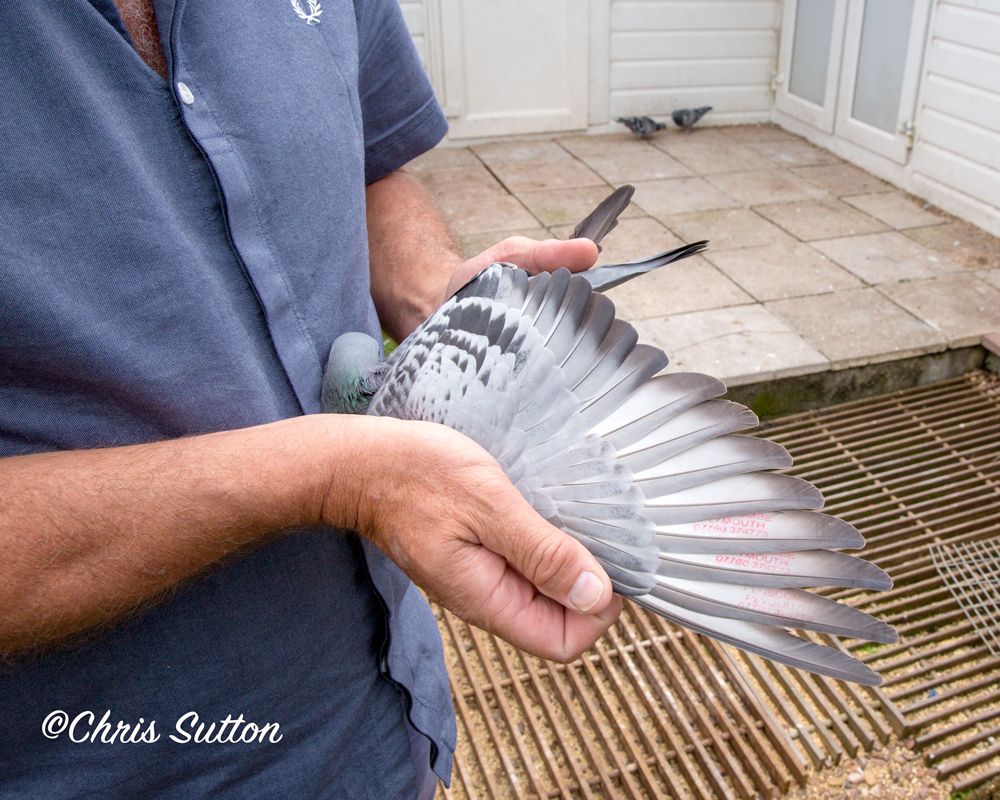 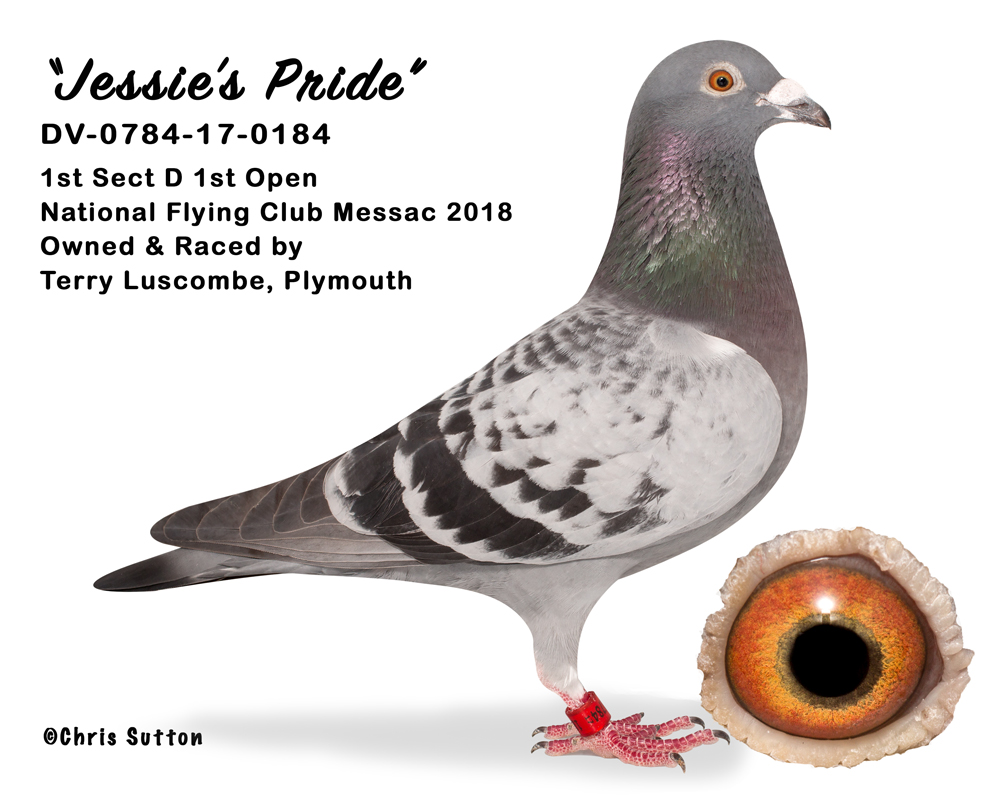 It was bought along with three others at the spring show in Houten to be raced as a “coach trip” young bird. Each year he and his friends go to Lier Market by coach from the Plymouth area and buy three youngsters each to race and a £10 per fancier pot is won by the best of them. The winner then chooses the colour of the pigeon to be bought the following year. In 2017 Lier Market was cancelled due to bird flu restrictions so they diverted to the Houton Show and bought their birds from there. Terry did try to call the breeder but unfortunately, he did not speak English so my friend Martin Steffil helped out in order to tell him his pigeon had just won the biggest club in the UK… I think he may have had a surprise.

Terry’s father served in the RAF Pigeon Corp, and when he was growing up his older brother raced pigeons but at 16 years old he took them over and has kept detailed records dating right back to that year, 1974. As I have previously said, he has now decided he wants to take a more relaxed approach to pigeon racing, making more time for his granddaughter and new caravan. So, for the old birds, Ancenis and Saintes with the NFC are the only remaining races he will enter. His 40 strong young bird team will go to the first four races in the club and then be rested until the yearling stage.

Before this National Flying Club win he was a little deflated but has now been given the motivation to continue and I wish him all the very best for future races. He has worked hard for years in the administrative side of the sport and fellow club members are pleased he has been given his just rewards “it could not have happened to a nicer bloke” they said. Taking a more relaxed approach has proved successful for him, long may it continue.

The next race is the Ancenis Open to commemorate the WW1 Armistice so our message to any non-members is come and join us for this special race, there is £1000 to be won and who knows, you may have a great day a want to join the NFC. The entrance form is in the press and can be downloaded from the website www.nationalflyingclub.co.uk