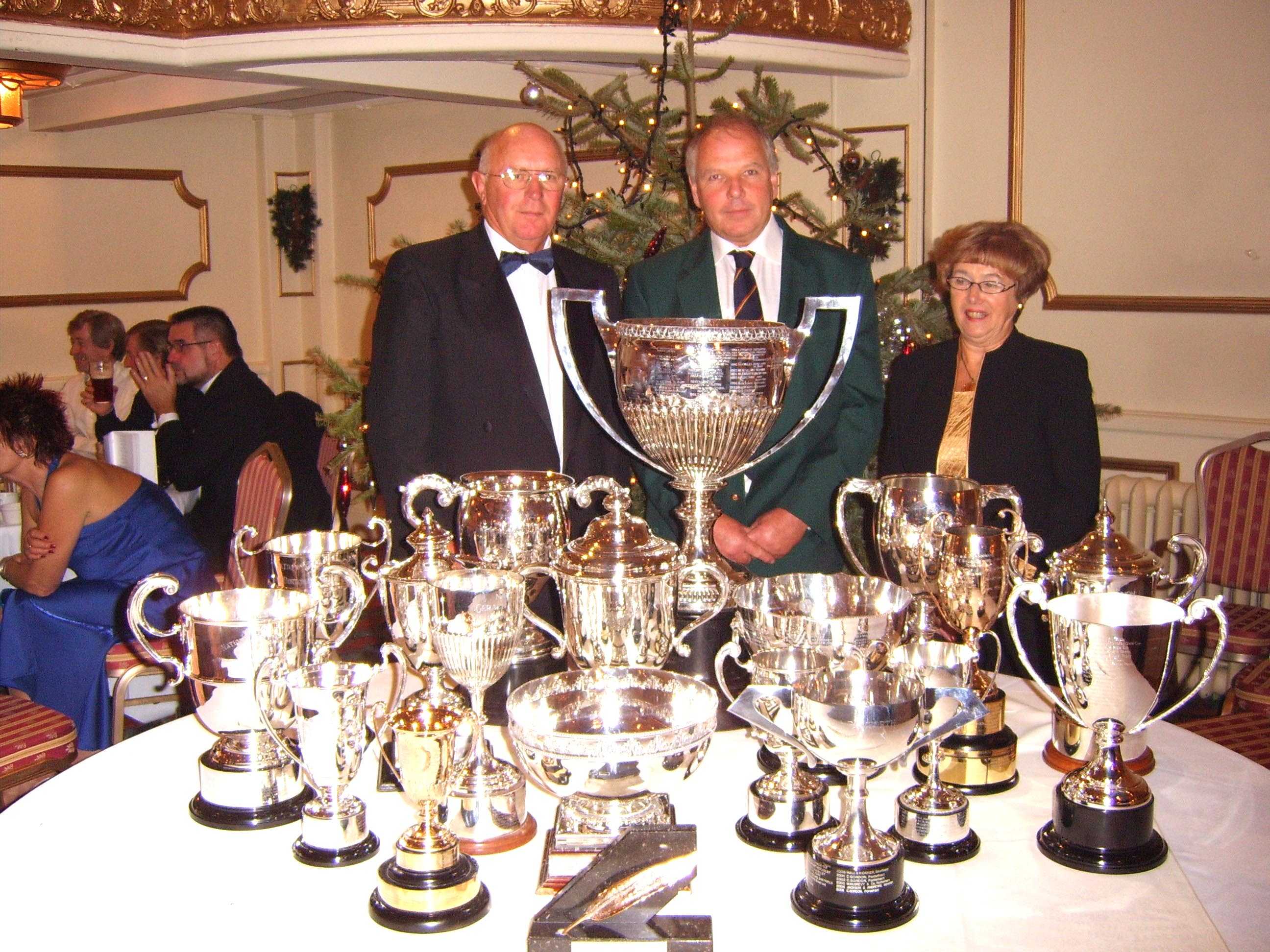 The 2005 National Flying Club Dinner and Prize Presentation was held last Saturday, December 10 th at the Prince of Wales Hotel in Southport.

A full house was welcomed by stand-in toastmaster Mick McGrevy and, after a toast to Her Majesty The Queen from the President Fred Sharman, Mick read out a best wishes message from the club's patron. Trevor Harris proposed a toast to the ladies and members and introduced the guests - Carlo and Julie Napolitano and Brian and Cornelia Long. Carlo spoke briefly followed by Brian, who said it was a great honour to have been invited. Brian referred to the magnificent array of trophies on display, acknowledged the part played by the ladies of the sport, and asked that everyone spare a moment to think about all those who finish 2 nd and so just miss out on the plaudits accorded the winners. Brian said he was now part of the NFC team having been elected onto the committee earlier in the day and, having witnessed the progress being made with regard to the new transporters and other things, he felt the club had a very bright future. He concluded by toasting the National Flying Club. Fred Sharman thanked Brian and reiterated his sentiments with regard to the new transporters, which Fred felt would be envied by all. He thanked all those involved, in particular Brian Stansfield for dedicating many hours of his time to the project and Roy Stretton who had assisted with the legal and financial arrangements. Fred further thanked Roy for his steadfast support over the preceding 12 months, particularly with regard to the problematic Saintes race. He paid tribute to Karen and Sid Barkel for producing the club results in record time, and thanked, in turn, Rod Harding, Treasurer, for helping to turn a recent club loss into a £10,000 profit; Nobby Henley for liasing with the jewellers and organising the auction of birds; Mick McGrevy for standing in as toastmaster (this looks like becoming a permanent position!); Julie Froggatt for once again organising the raffle, and all those who had helped to run the marking and clock stations. He said it was because of the efforts of people such as these that the NFC would remain the premier club in the UK.

The section Jacket winners with the National Flying Club

Without further ado, Mick McGrevy turned to the prize giving. He gave a brief summary of the season, quoting statistics showing how many of the section winners had taken top open positions in each race, thus emphasising that good positions are rewarded in national racing irrespective of loft location. Mick said that he had been a member of the NFC since 1969 and that this year's Grand National from Tarbes was the best he could recall, both in terms of returns and performances. From a personal point of view, with there having been 94 first-day birds recorded he knew that he would have to clock very early the next morning to be thereabouts, so he and his son Robert were duly up at first light. After a while Robert went to check the NFC website for an update, when the phone rang - it was Sid asking Mick if he would go and verify the likely race winner belonging to fellow Section K member, Chris Gordon. Being a dedicated committeeman, Mick left Robert in charge at the home end (thus risking missing his own arrivals) and set off on the 30-minute journey to Old Snydale - and by the time he arrived Chris had timed another bird (which was to finish 8 th Open). He said that, at 725 miles, this was a performance one could only dream of. Mick then called Chris forward to speak on behalf of the prizewinners. Chris paid tribute to all the trophy winners, saying that to win any trophy at national level is no mean feat. He said he hoped everyone present had enjoyed racing their own pigeons as much as he had in 2005, and that his performance had proved that you can win a national no matter where you live. He hoped it would encourage more fanciers to have a go. Chris concluded by thanking sponsor for 'smartening' him up a bit by providing him with a blazer for winning the race, but said the only problem was, he'd had a to buy a shirt to go with it!

Sid Barkel then took centre stage to call forward all the other trophy winners present, with the trophies being presented by Cornelia Long, Doreen Kneller and Judy Napolitano. As Chris Gordon walked forward to receive the King George V Trophy, everyone present rose to their feet to acknowledge the magnitude of his wonderful achievement.

Before going onto this meeting I am only in a position to print information at hand, the full minutes will be made available in due course. The day started with the first of the meetings of the day, this being a 168 as per RPRA rules. The first on the agenda was from Mr Ray Barrington who was unfortunately unable to attend due to ill health; the members of the committee wished him a speedy recovery. Mr Barrington objected to the information of a previous meeting being published in the fancy press prior to him being notified of the result. The committee wish to apologies to Mr Barrington for this incident and will put in process a system to see that this does not happen again. The second issue on the 168 agenda was from Mr Fred Bloor regarding the committee not correctly quoting the rules and again publishing the result of the committee meeting before officially notifying him of the outcome. Again the committee apologies to Mr Bloor for this lack of communication and as with the previous case will endeavour to make sure that it does not happen again. The remaining issue was concerning Mr John Tyerman regarding accepting birds at the marking station, as with the two previous cases Mr Bloor represented. It was pointed out to the committee that the secretaries of the NFC do get late arrivals at the offices but they are post dated as per club rules and therefore accepted. However at a previous meeting Mr Tyerman lost his case regarding taking extra birds to the marking station. Again Mr Tyerman was not officially notified of the outcome therefore again the committee offer their apologies for this lack of communication.

As always the committee hold an ordinary meeting prior to the AGM, so after a short recess they went onto the next meeting. This meeting is held for the committee to look at the senior officials positions and forward their recommendations to the members at the AGM. Mr Brian Stansfield also spoke at length about the transporter and presented two samples of panniers to the committee for their approval. Both panniers had their benefit with the committee making their choice that went on display at the AGM. All other business from this meeting is presented and reported on with the AGM.

Fred Sharman, Roy Stretton and Rod Harding were re-elected to the posts of President, Chairman and Treasurer respectively and Eric Watkins of Section J was newly elected as a Vice President. The convoying team of Messrs Bates, Allen and King (reserve) was also re-appointed and Elimar Pigeon Services was confirmed as the club's Press Officer. The section representatives for 2006 are: Section A - John Tyerman; B - none; C - none; D - Paul Naum & Rod Harding; E - John Wills & John Edwards; F - none; G - Richard King & Geoff Cooper; H - Brian Long and Trevor Harris; I - Roy Stretton; J - Ray Scriven & Eric Watkins, K - Mick McGrevy; L - Brian Stansfield & Roger Sutton. All of these members served on the committee in 2005 with the exception of Geoff Cooper who has returned after a short absence, and Brian Long who becomes a member of the committee for the first time.

Propositions: 10 of the 32 propositions were carried (numbers 6, 11, 12, 13, 22, 26, 27, 29, 30 & 31) and proposition 8 is the subject of a recount. All propositions for an increase in subs were therefore defeated. A total of 618 members voted. The chairman indicated in the meeting that the subscriptions to the club are not sufficient for the basic general running account of the club. The chairman feels that the subscription needs increasing at some point so that their can be additional money made available to be paid out in prizes and not used to subsidise the general account. A few questions were asked on the balance sheet with the treasurer answering to the satisfactory of those present. From what I can gather there are a lot of members who feel that with the forward thinking of the committee the club are only going to go forward.

Additional photos of the prize presentation can be found on the National Flying Club's official website and at www.elimarpigeons.com

If you would like to become a member of the National Flying Club, please contact Sid Barkel on 0191 5210203 or at

The National Flying Club's new state-of-the-art transporters will be ready for the coming season so your birds will travel in the best possible comfort and they will be looked after by the club's outstanding convoying team. In general this was another good weekend for the members of the National Flying Club who attended the meetings and presentation. There is always something that comes out of these events 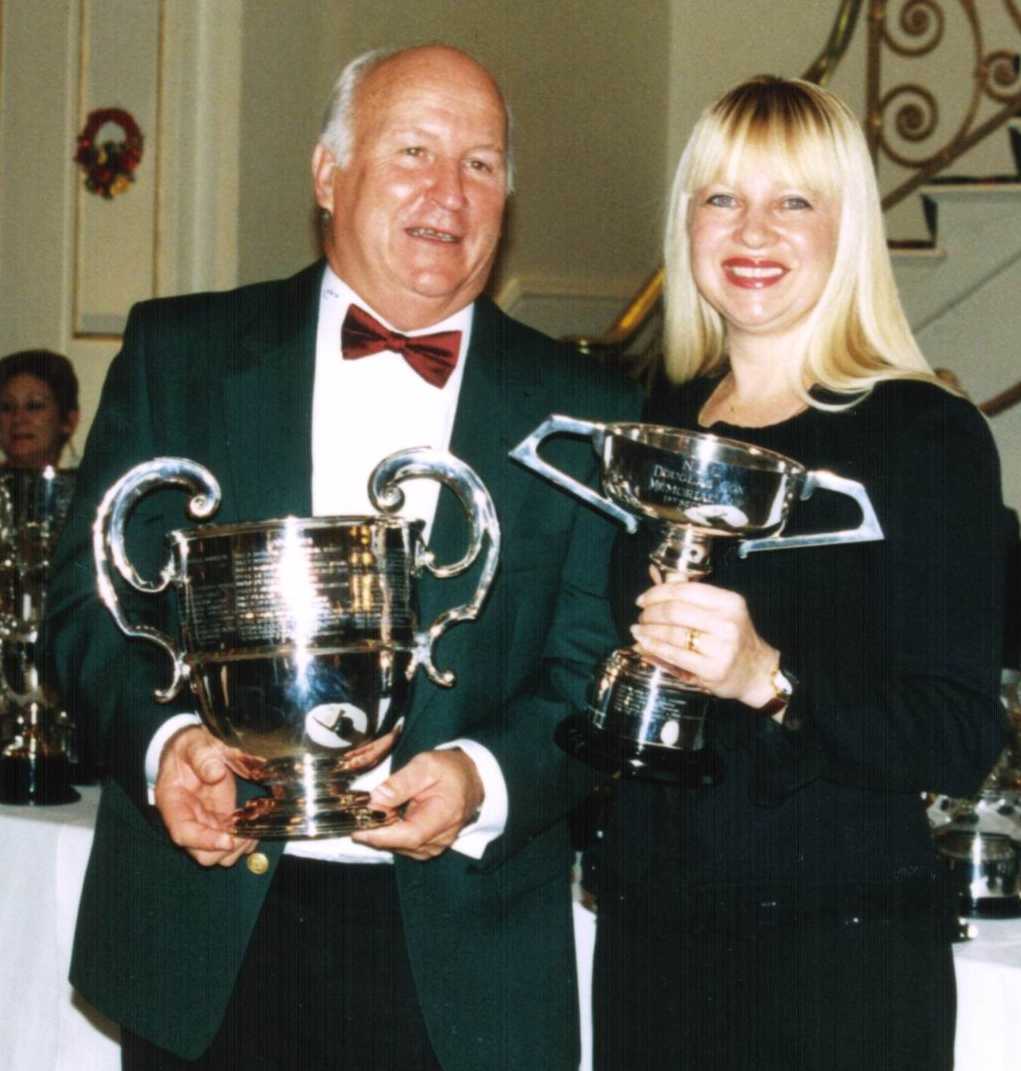 The Mrs B. Grainger Memorial Trophy 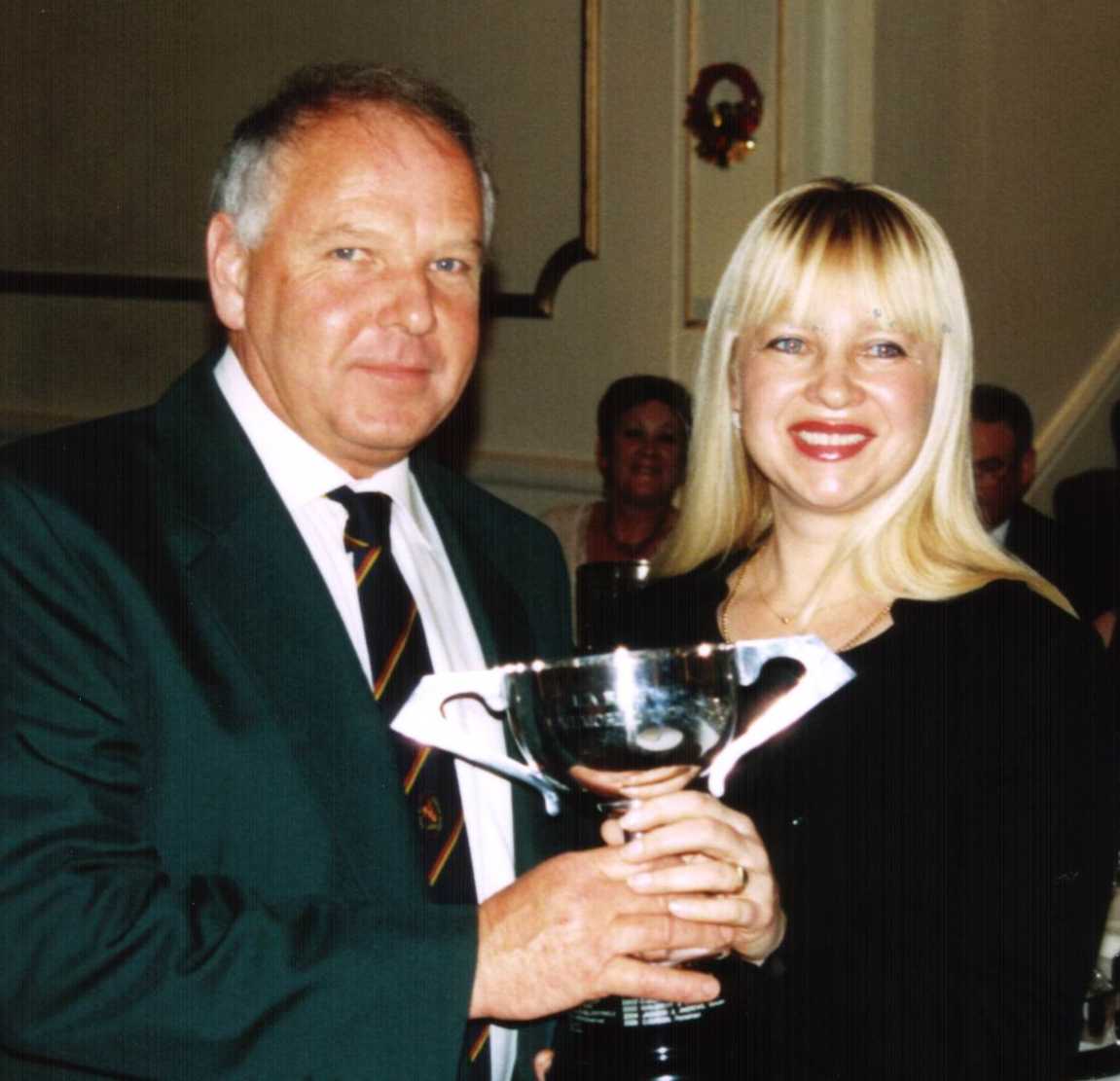 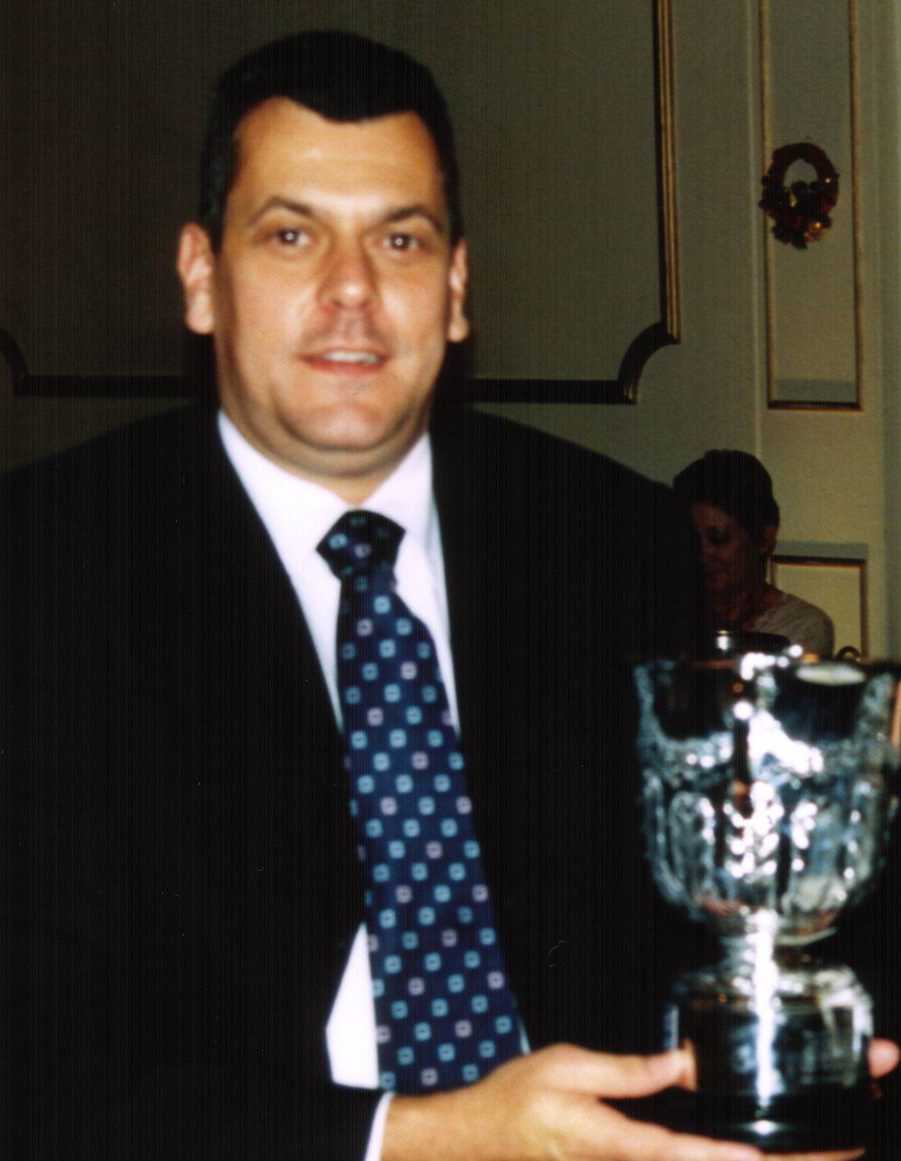 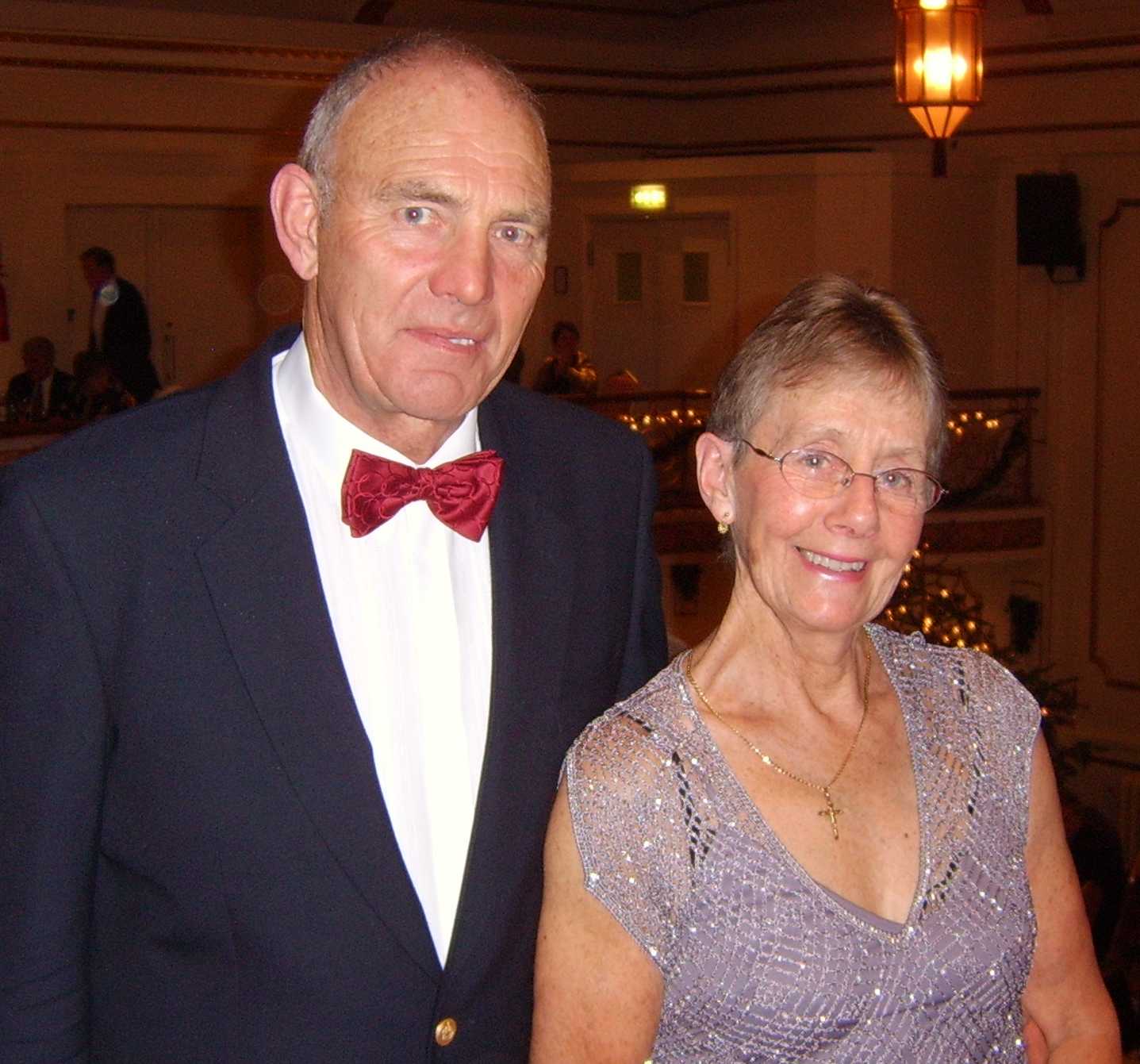 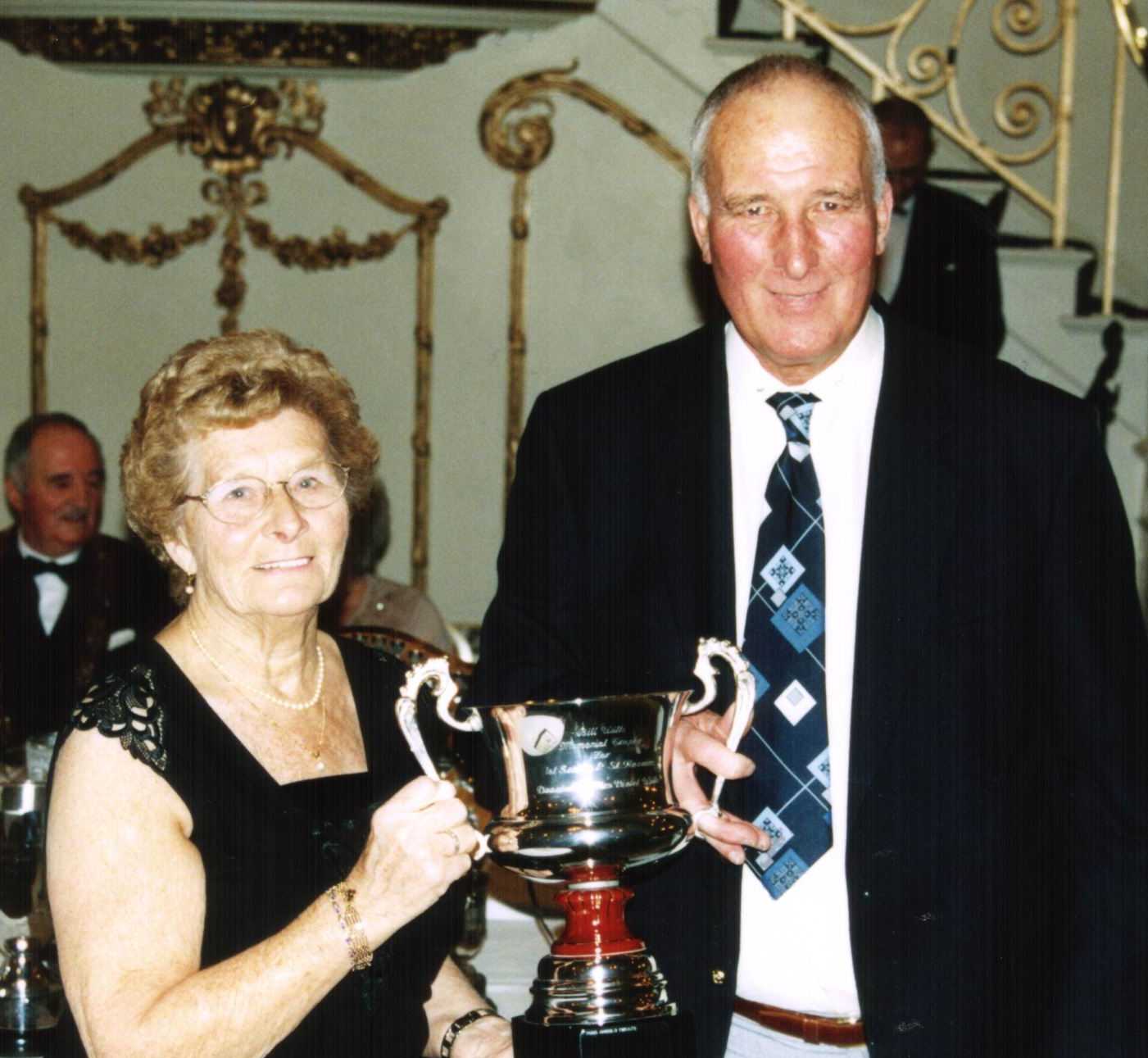 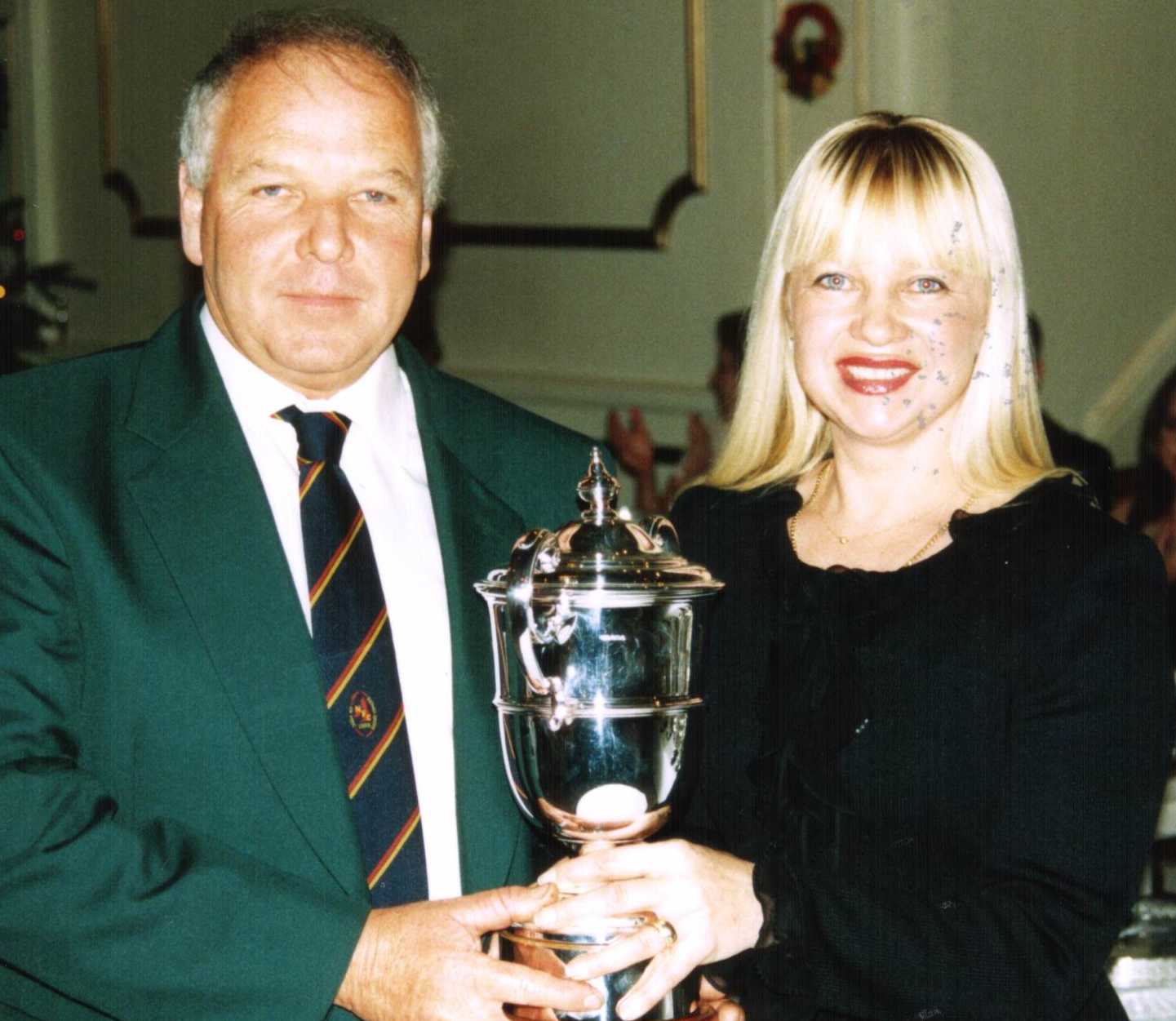 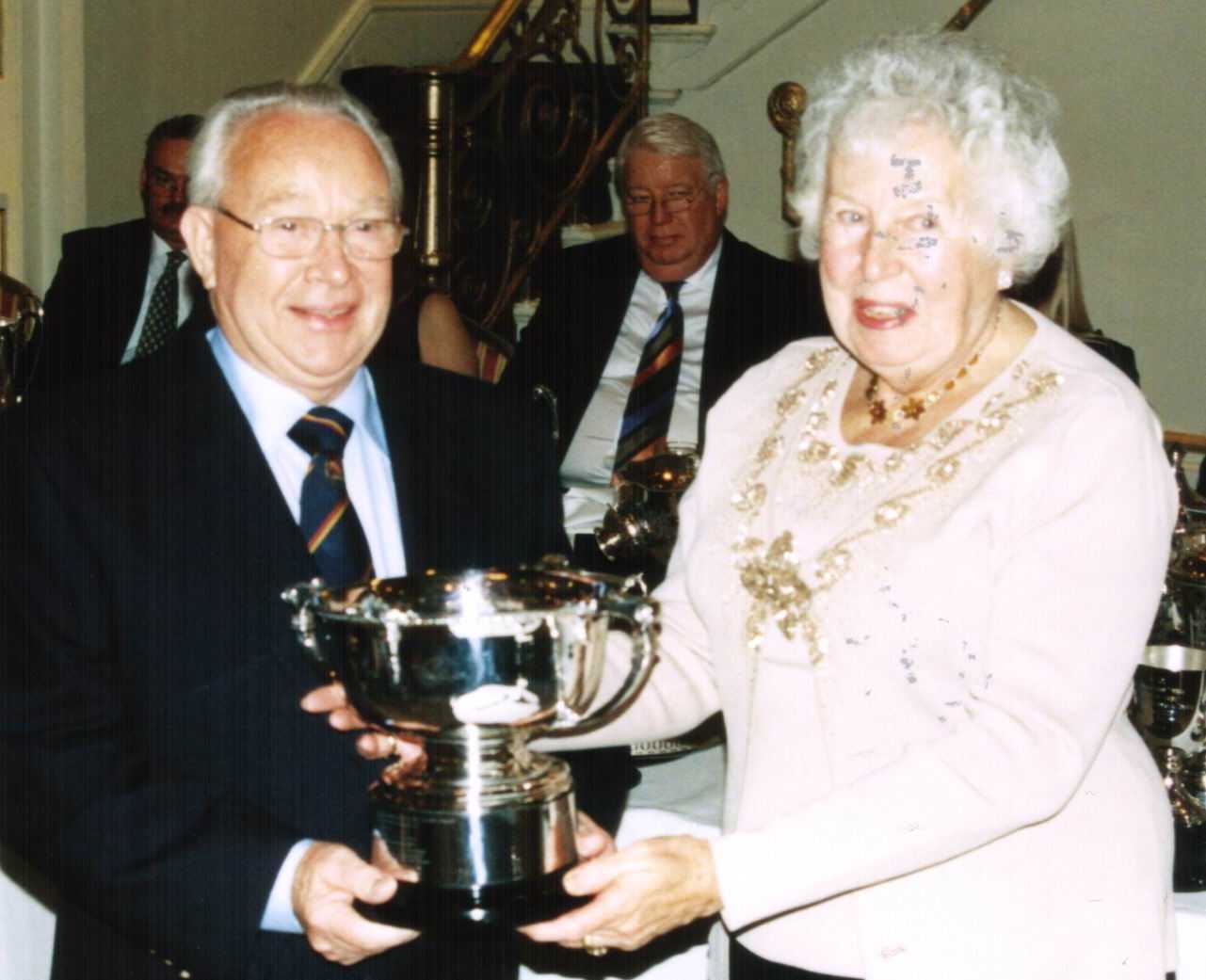 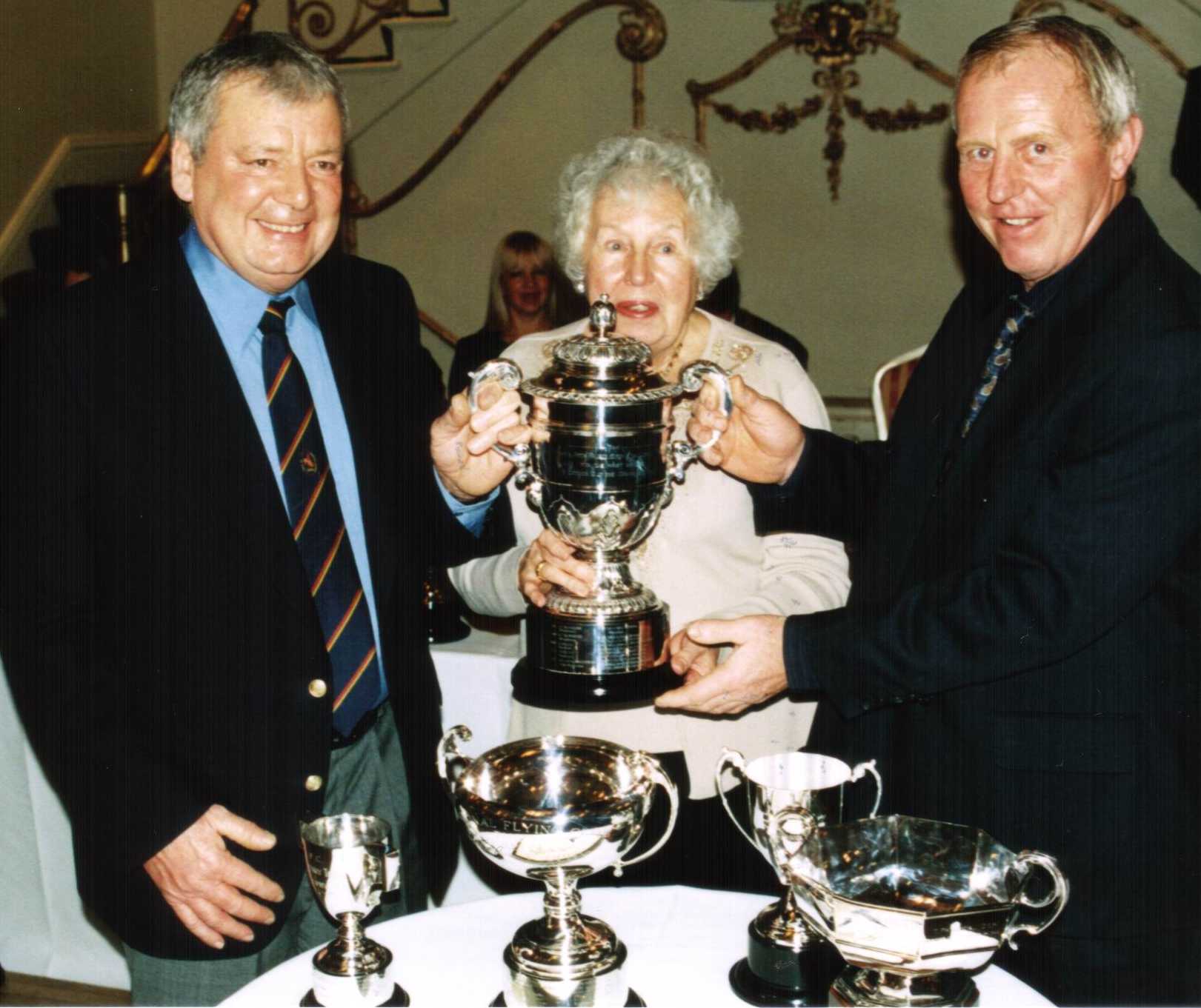 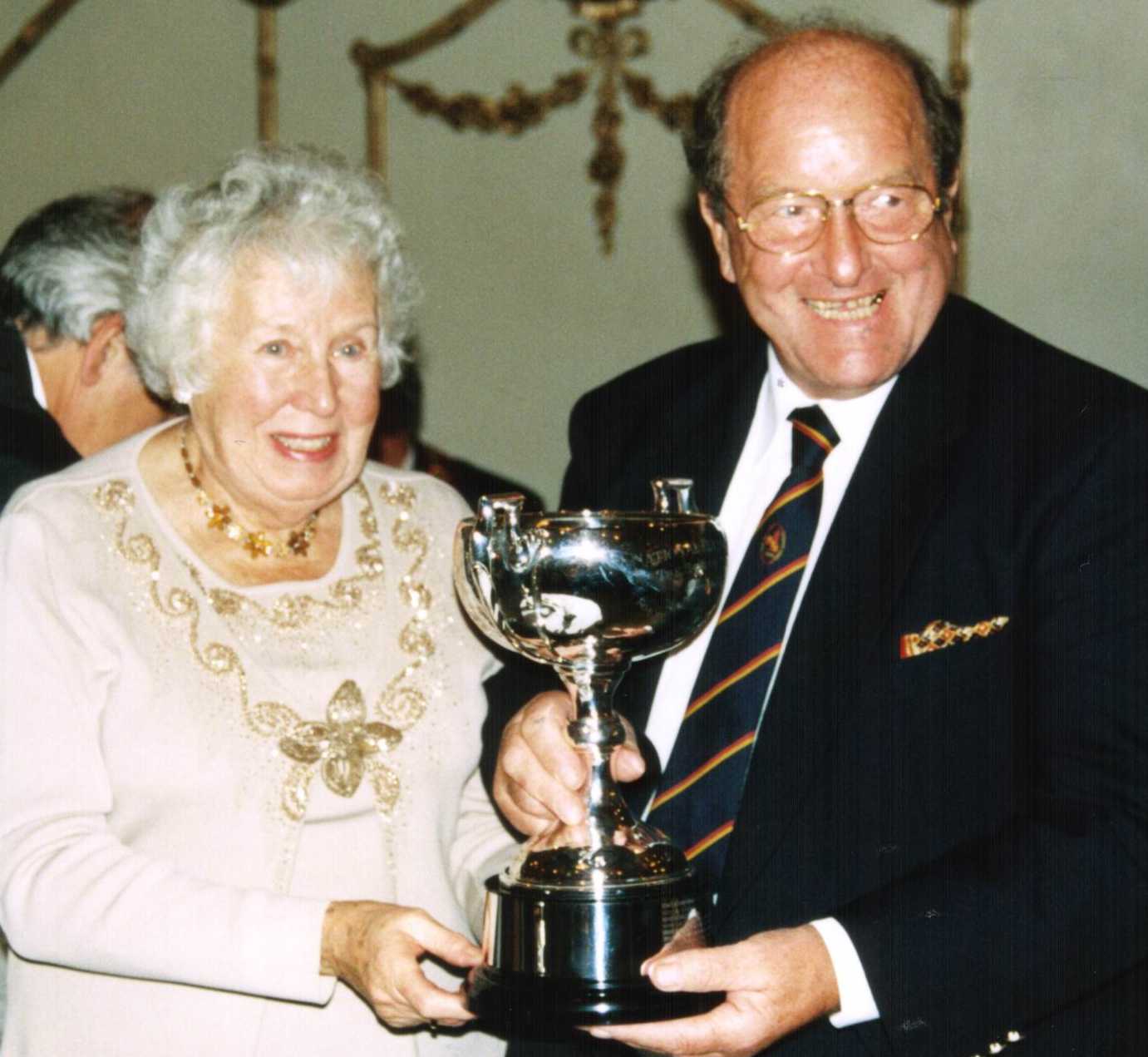 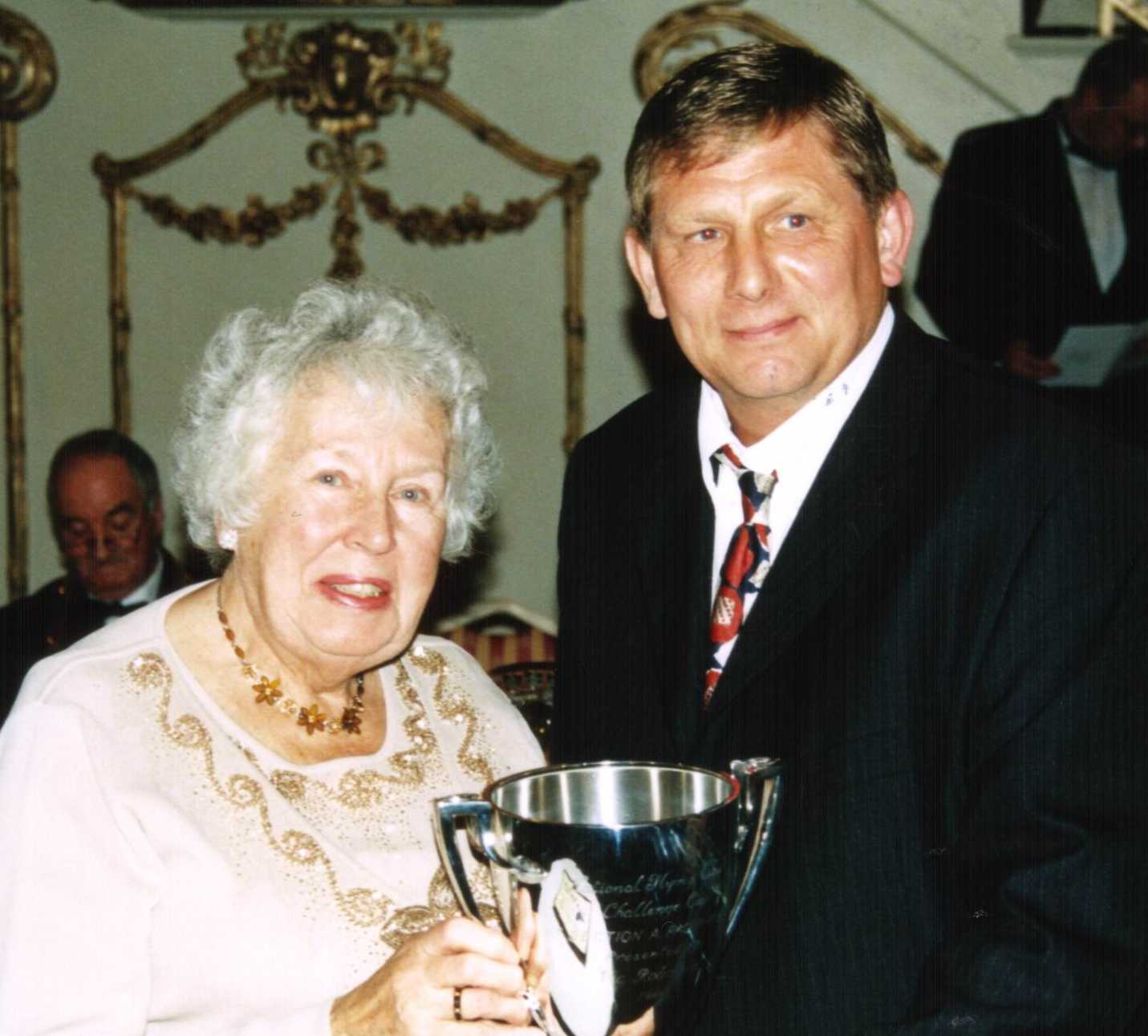 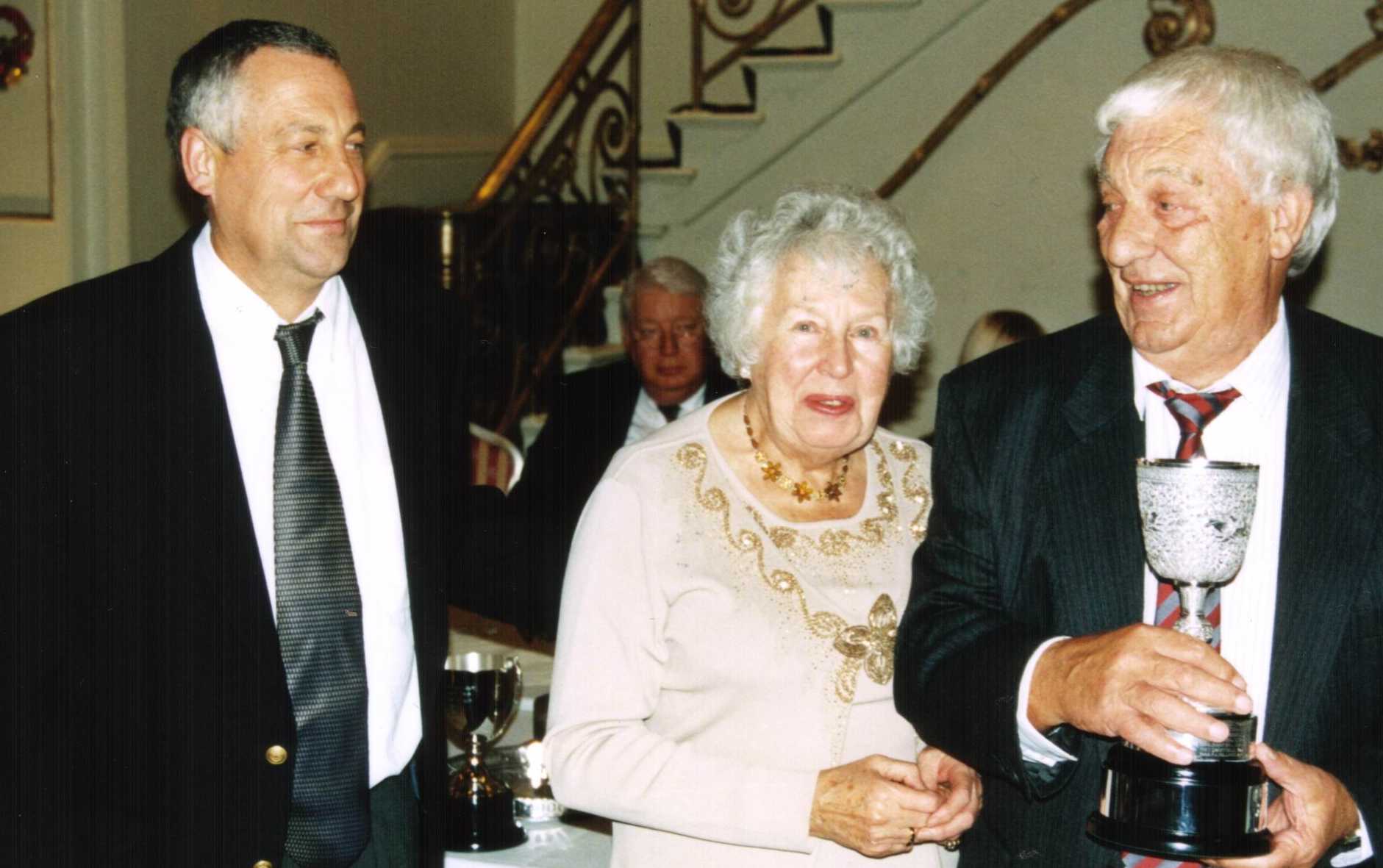 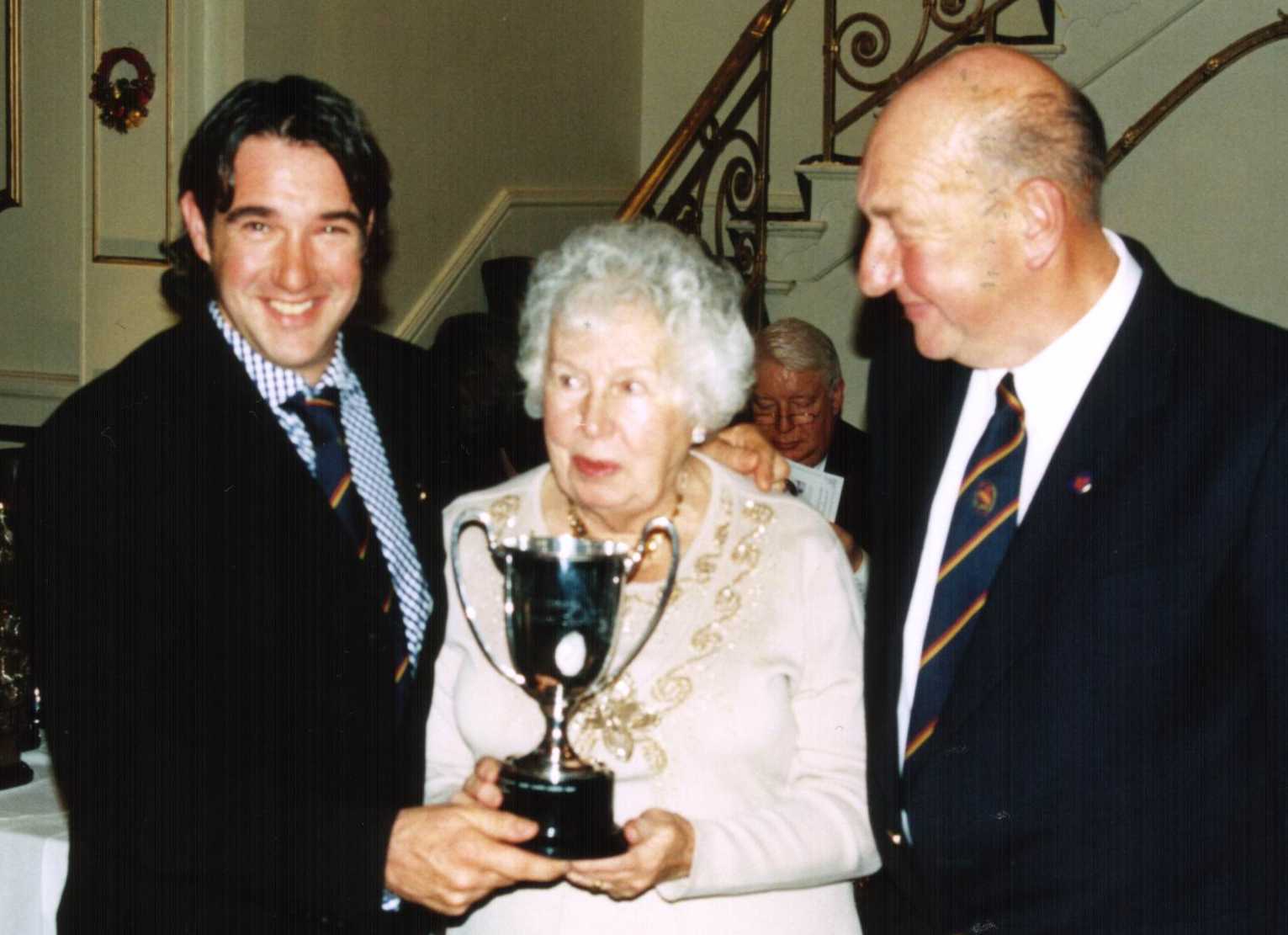 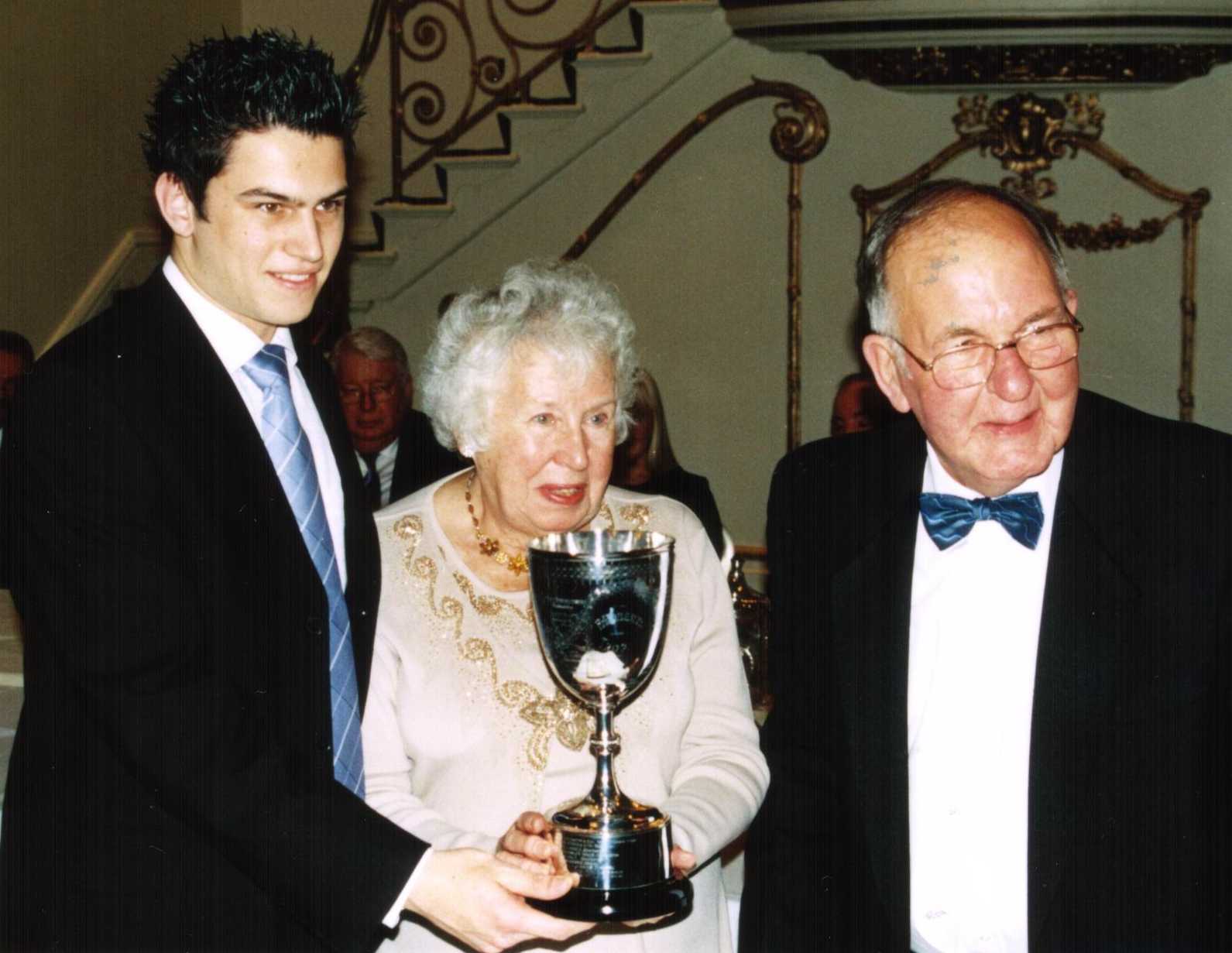 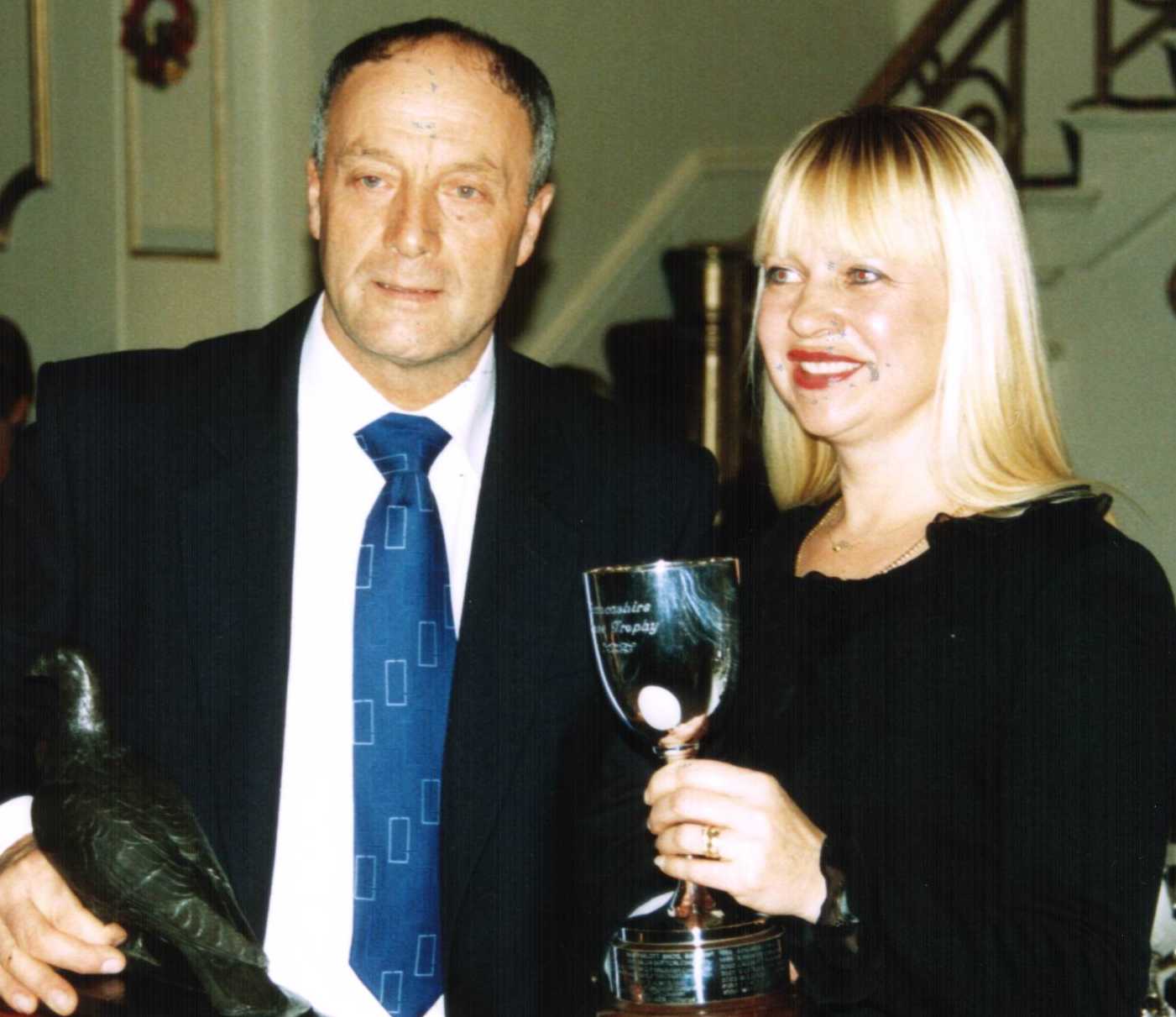 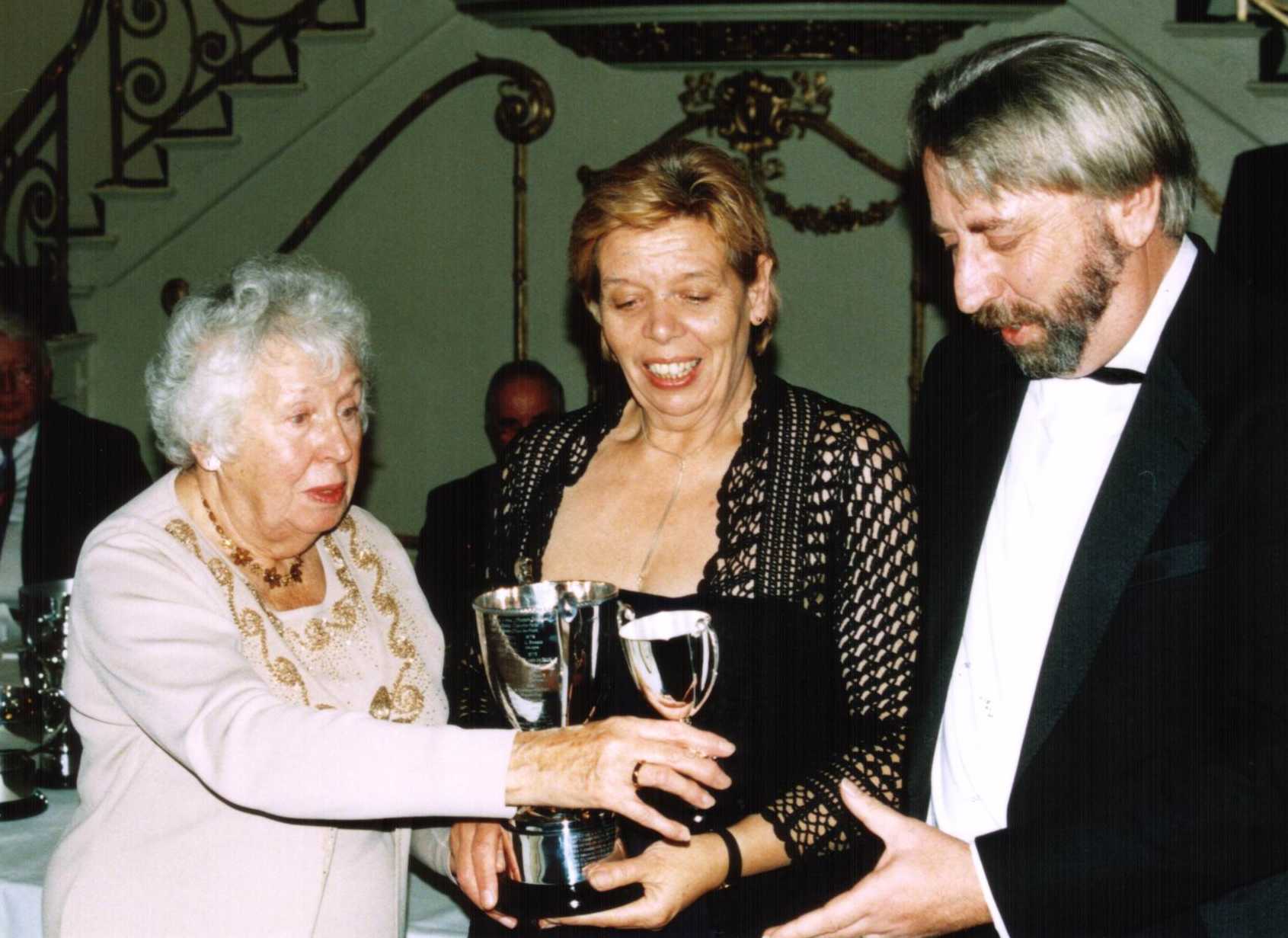 Doreen Kneller with the Redfern family 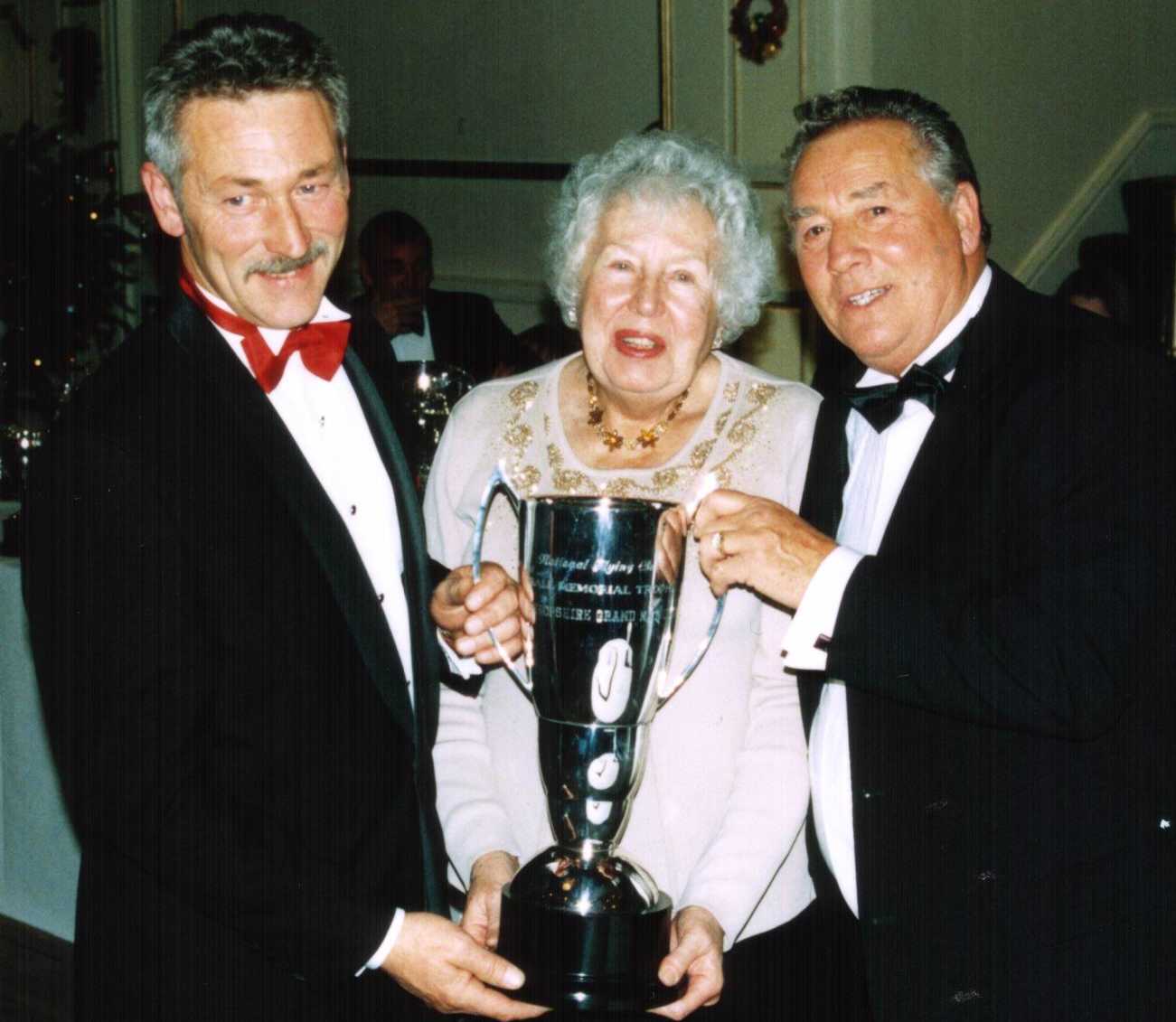 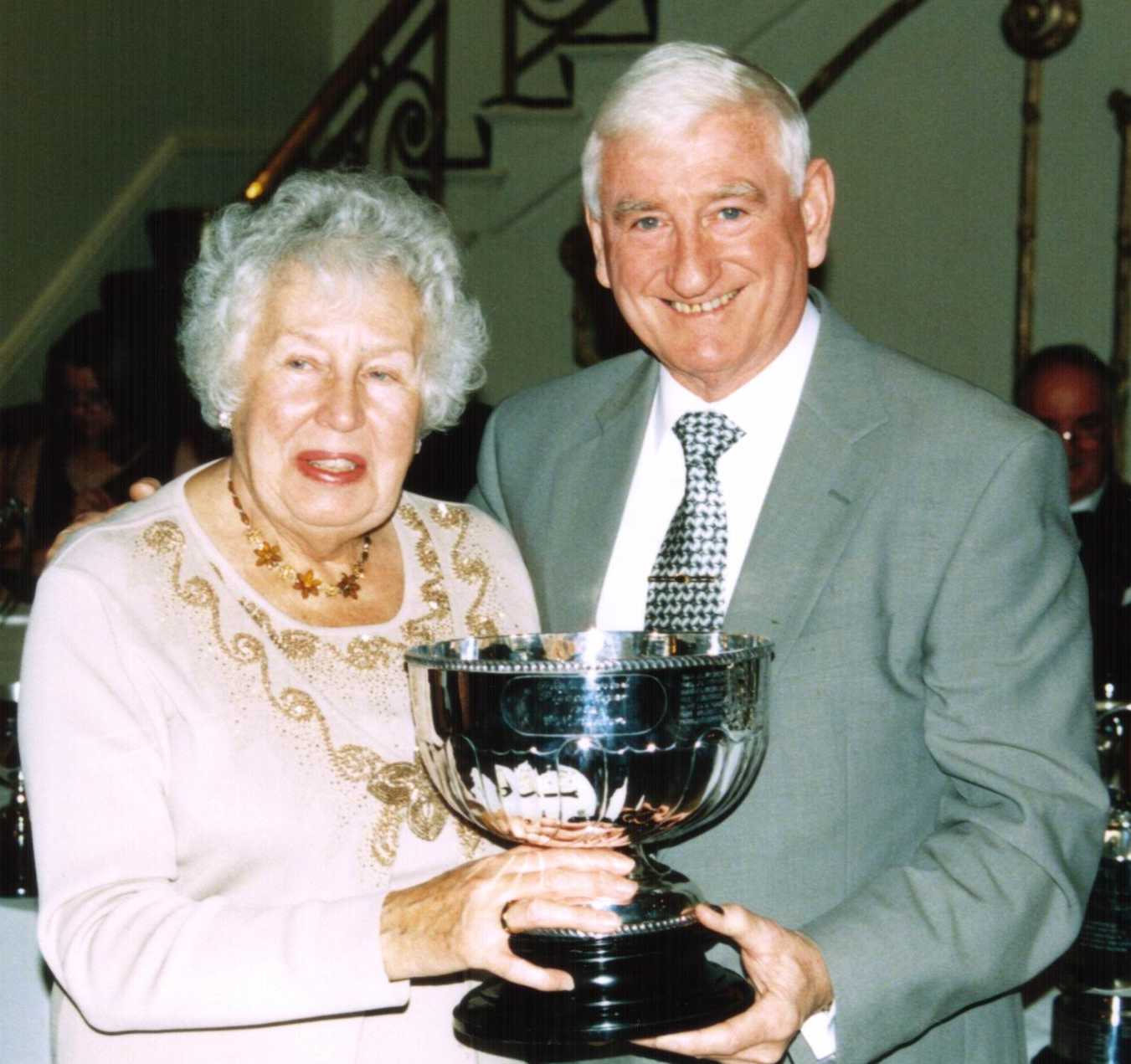 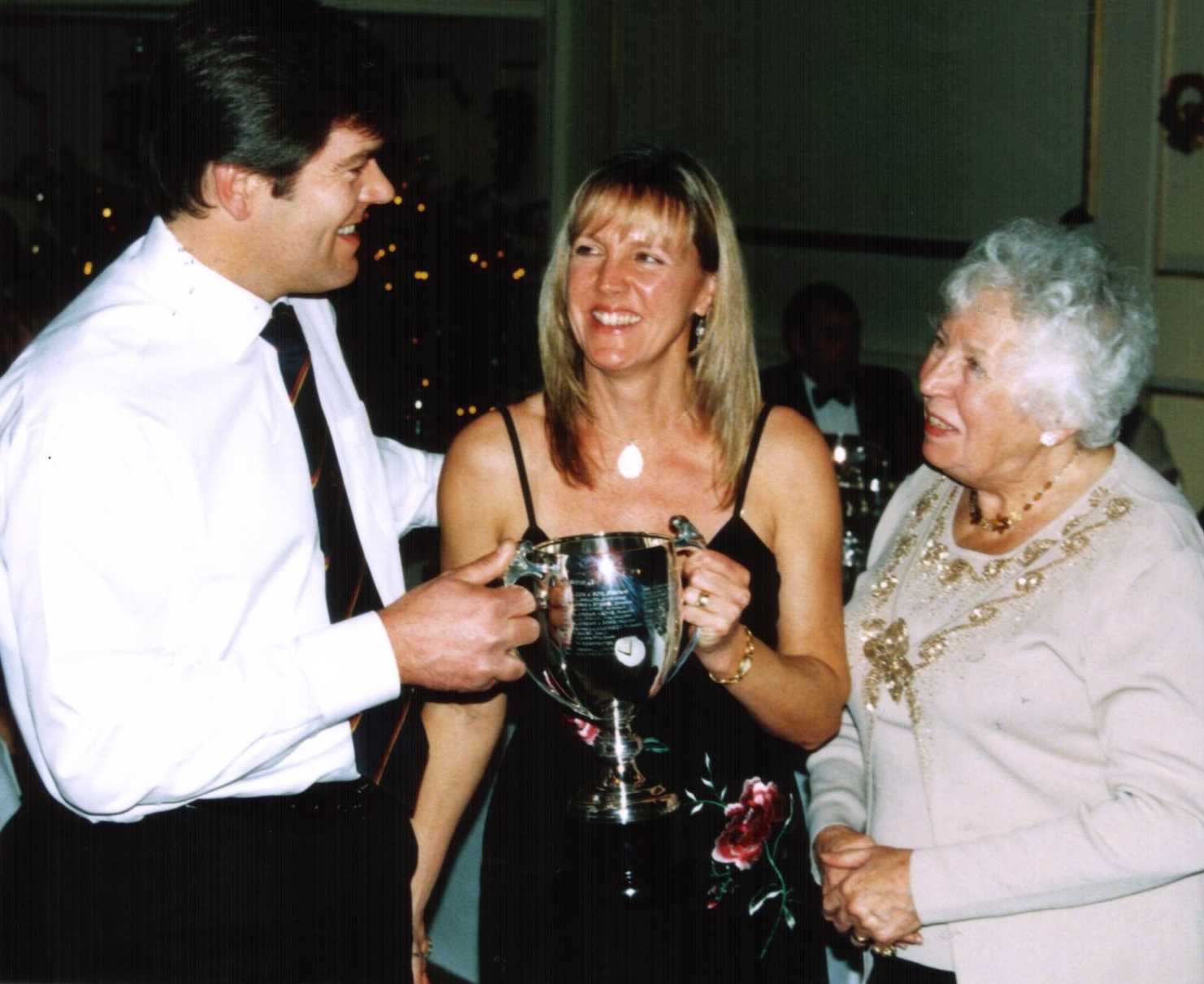 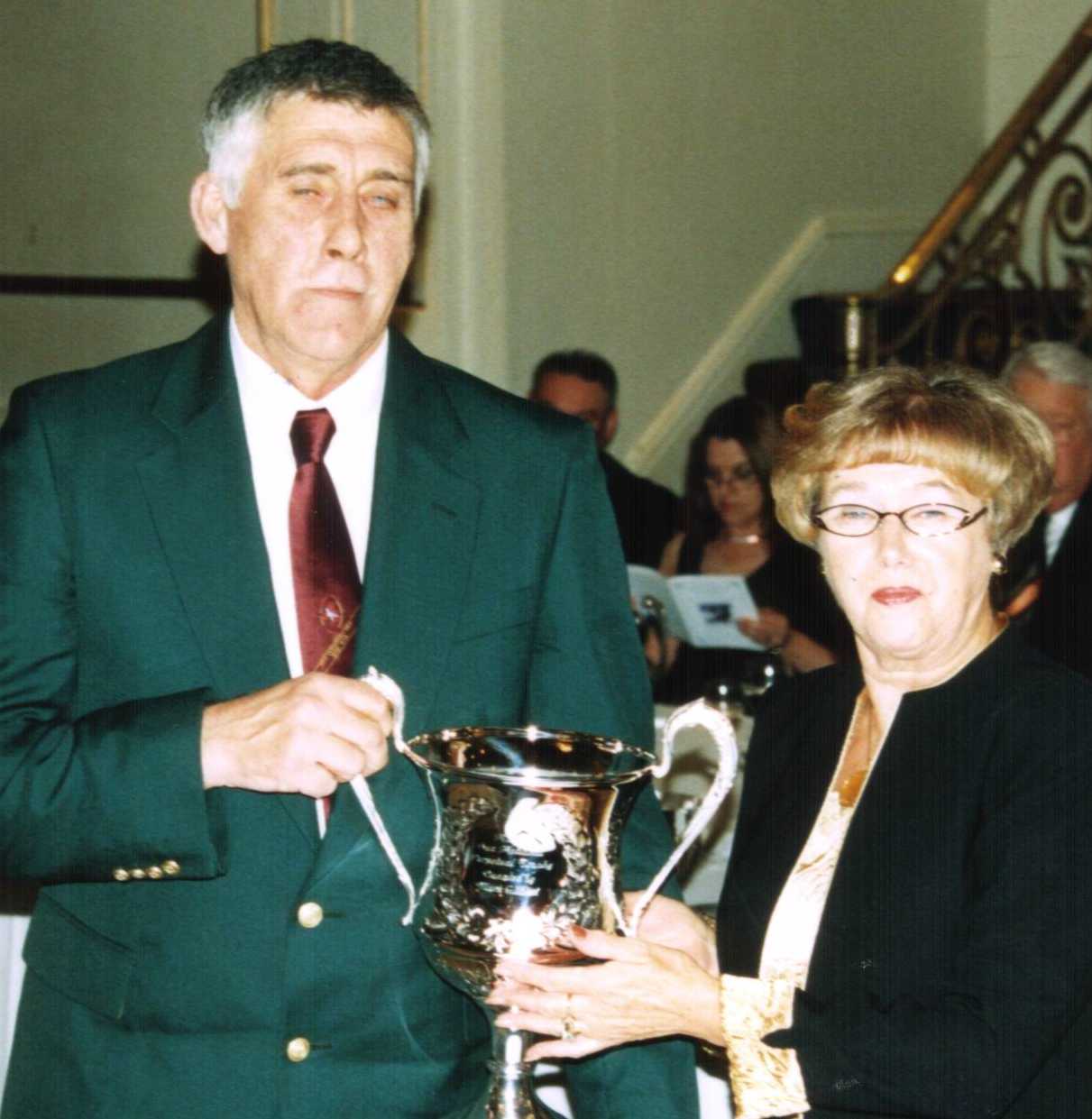 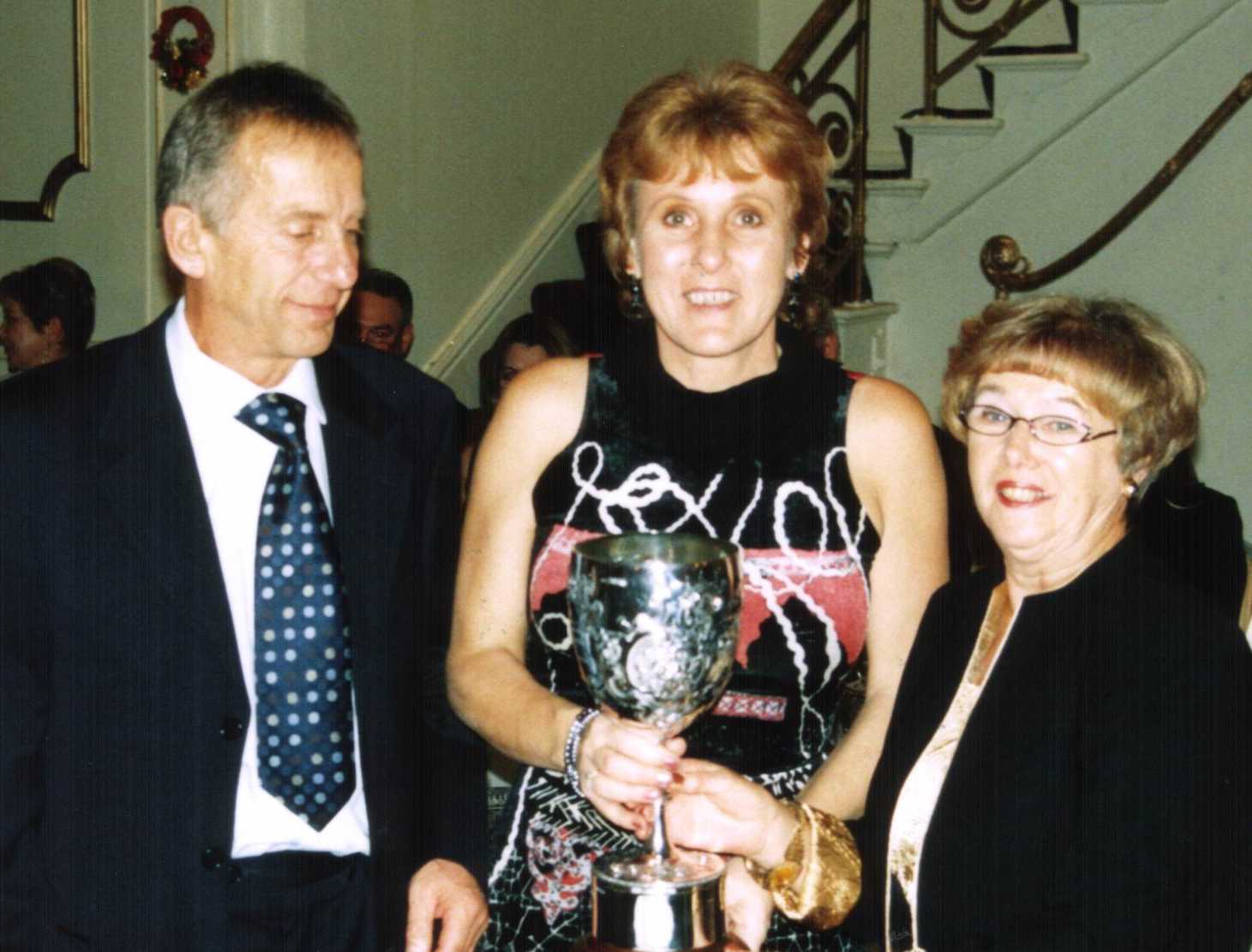 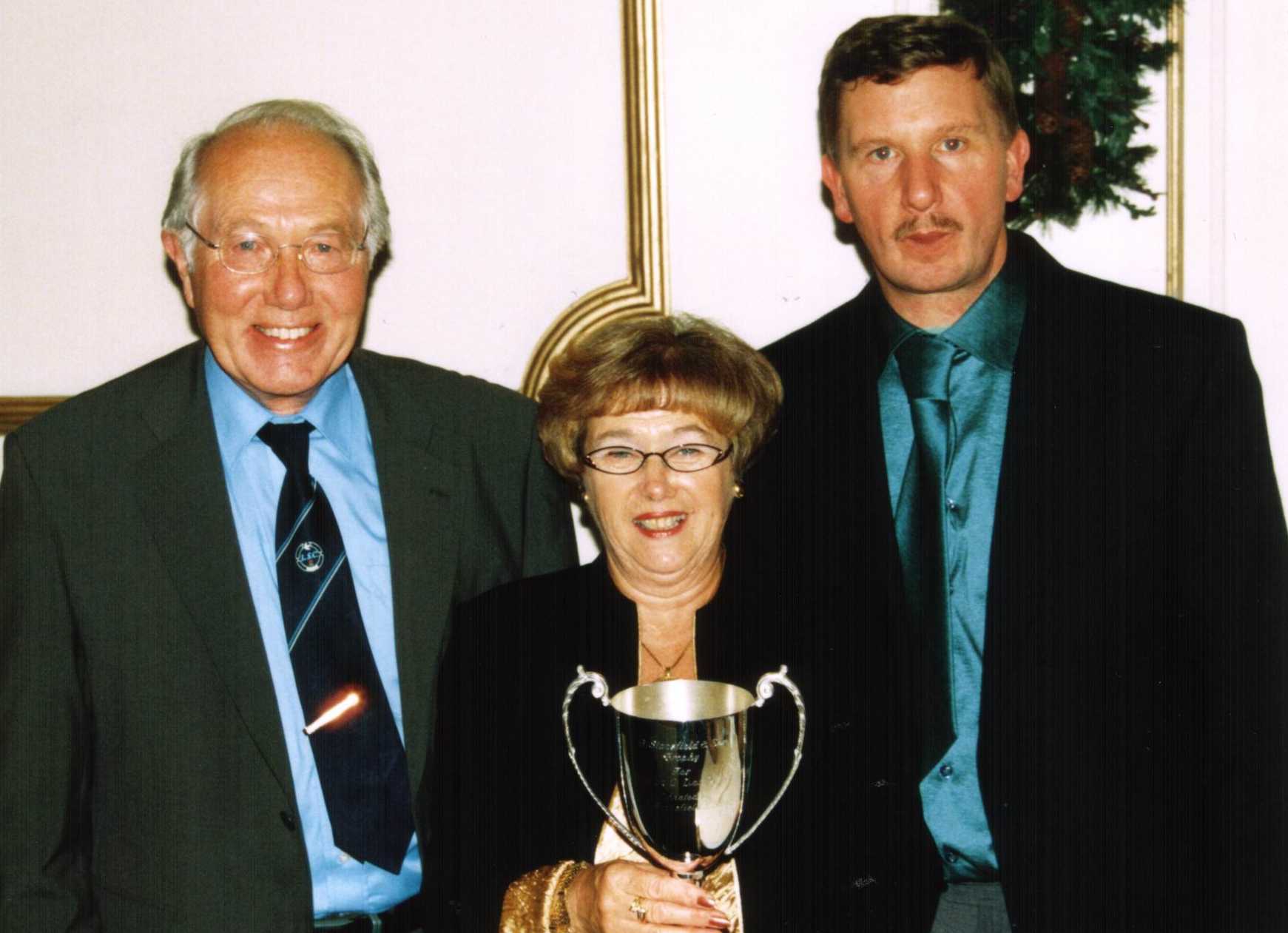 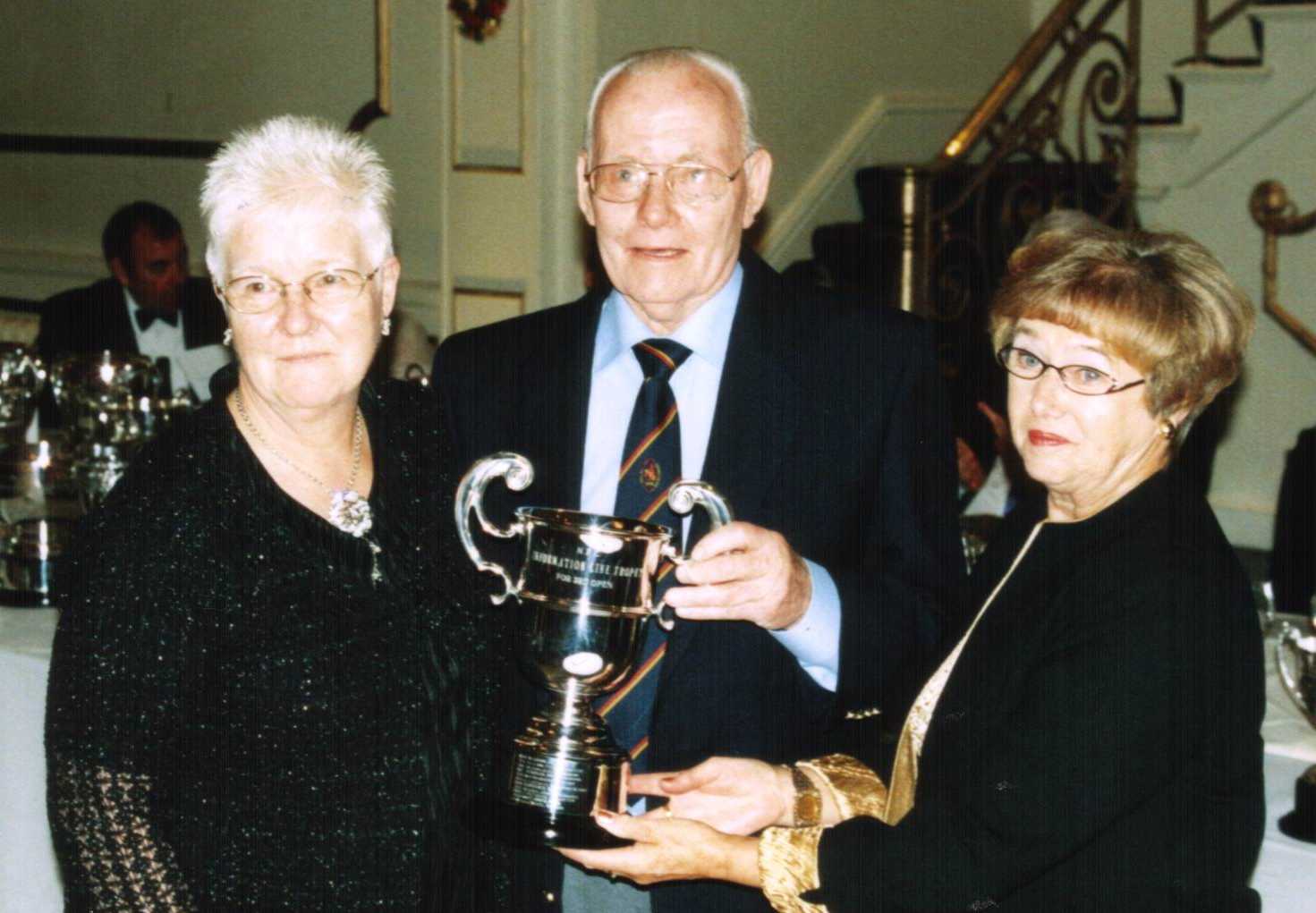 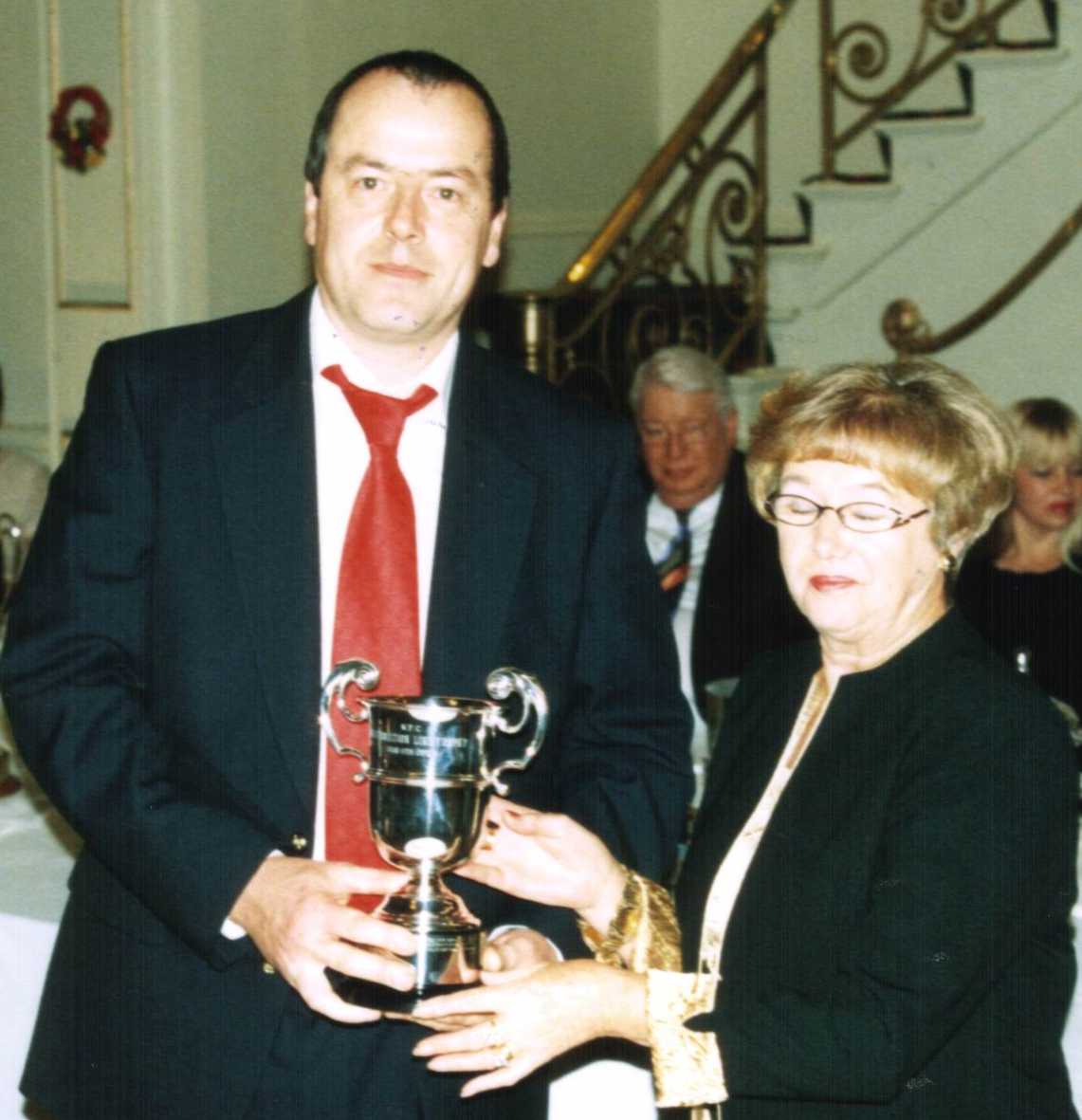 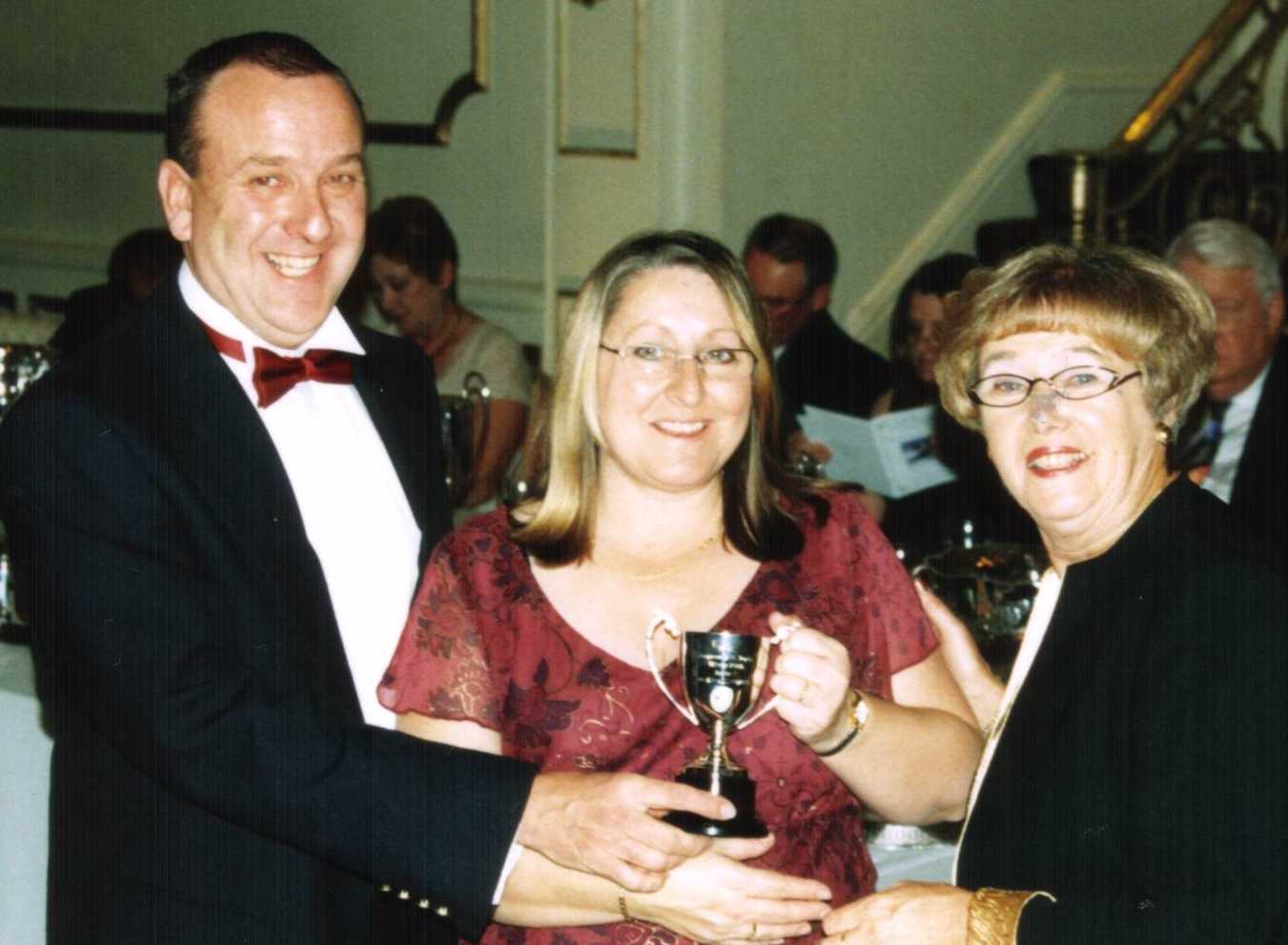 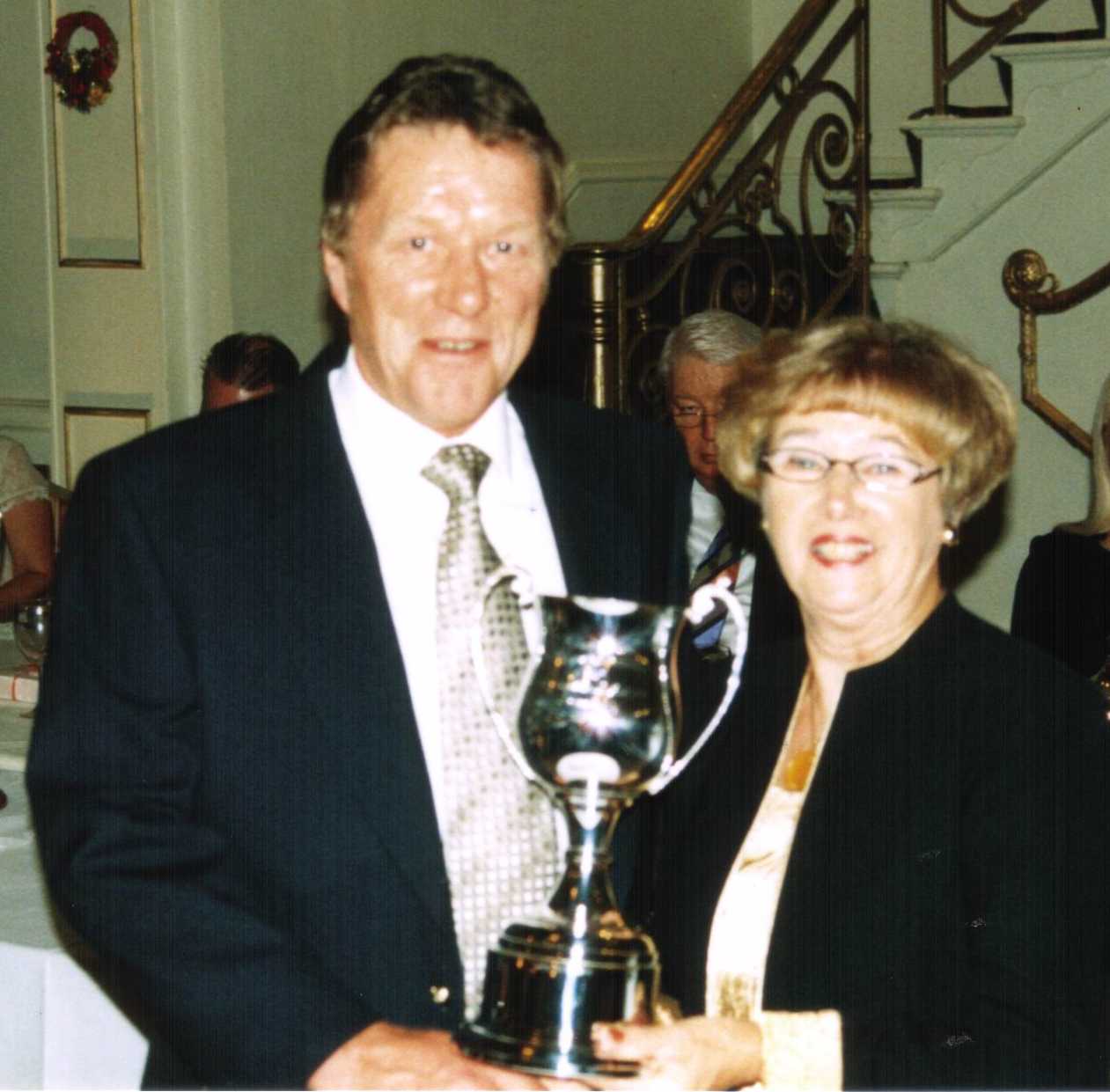 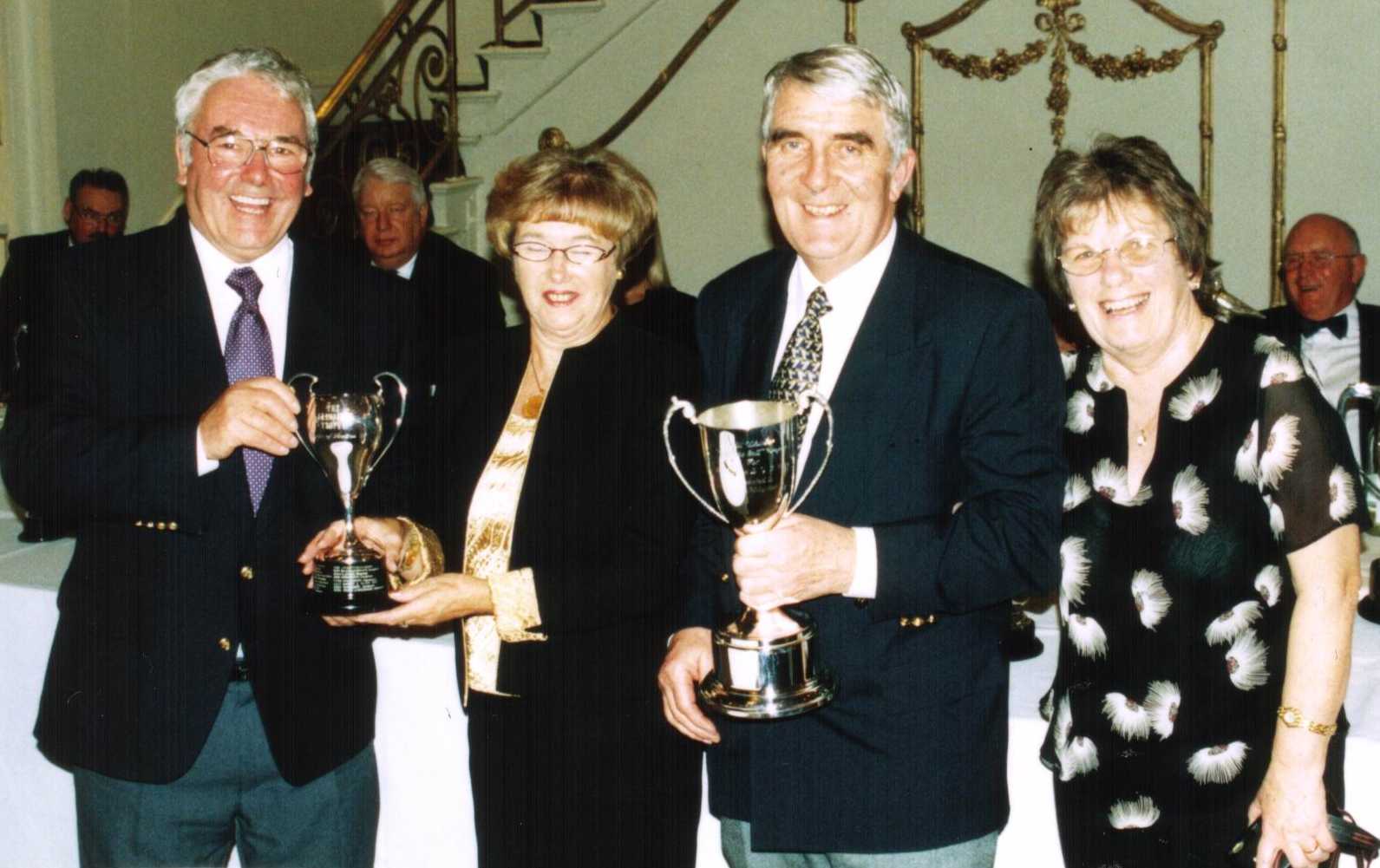 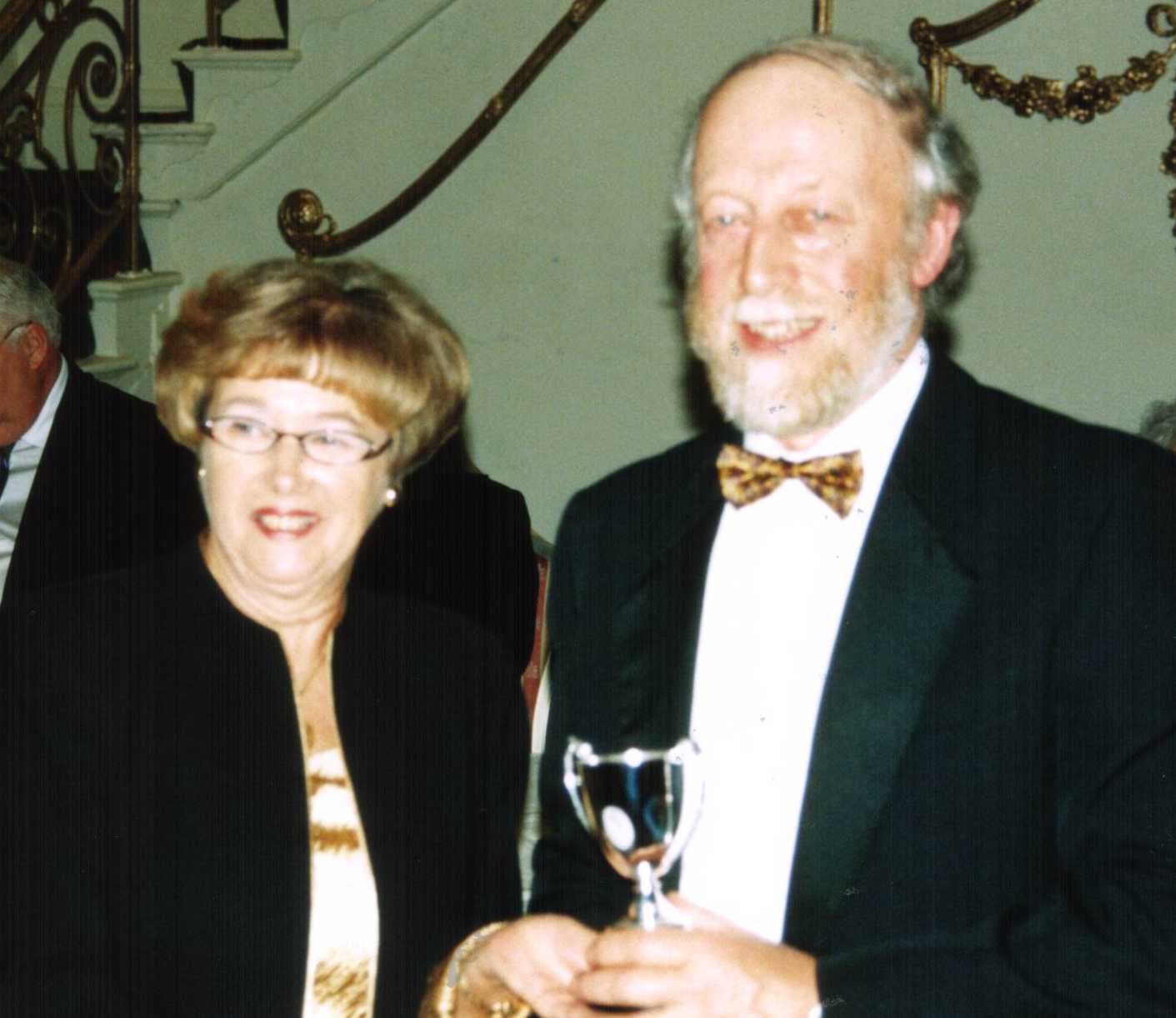 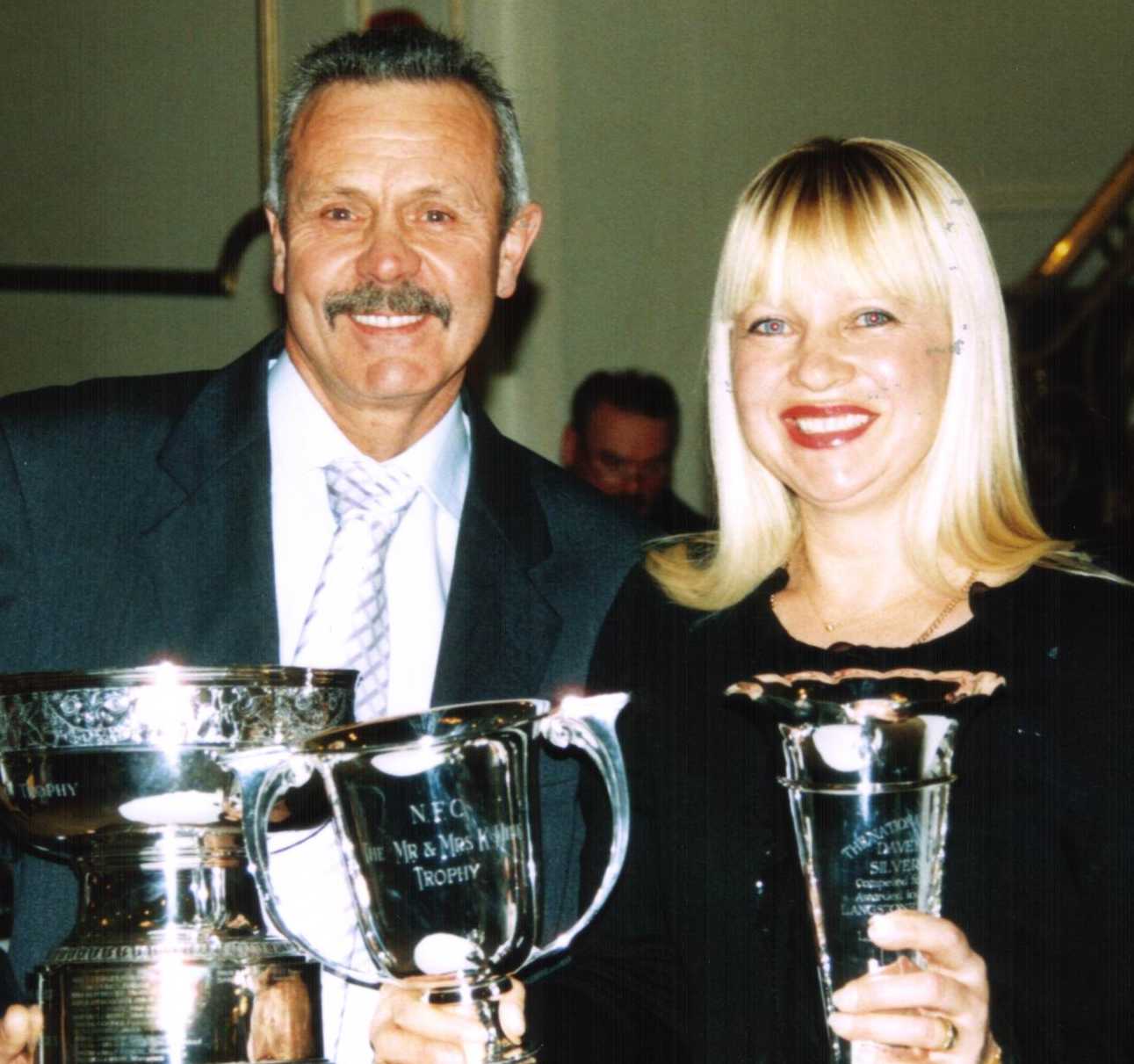 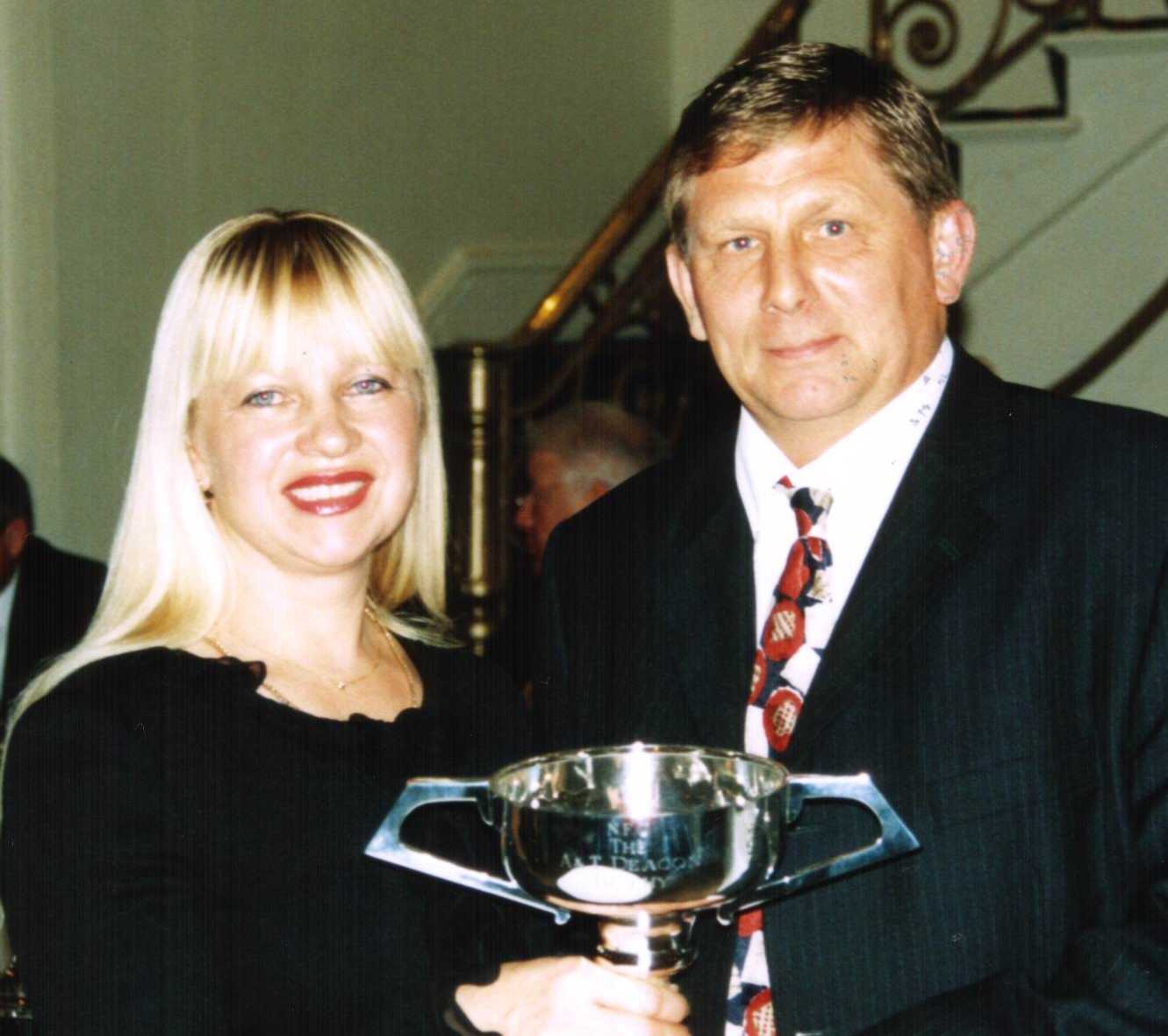