144
Latest news from the National Flying Club is that the Chairman Paul Naum has decided to cancel the AGM for 2020 as racing is due to begin and it would have to be held on a race day which is clearly counterproductive. The balance sheet has previously been sent to all members and any queries should be directed to the Chairman or Treasurer where they would be more than happy to assist. The proposition votes have been submitted online or by post and the results can be included in the handbook,…
Read More...

AGM Propositions for 2021 and Notice of AGM

441
Propositions for Season 2021 In accordance with R.P.R.A. Rules, members are required to vote on the following proposals. Please place a mark in the ‘For’ box if you are in favour. Place a mark in the ‘Against’ box if you are not in favour on the voting paper you will receive. If you have not yet received your voting paper it can be downloaded here Please return the voting paper to :- Mr. & Mrs. S. Barkel, Secretaries NATIONAL FLYING CLUB 21 Ridley Avenue Ryhope, Sunderland Tyne & Wear SR2 0SF…
Read More...

709
The NFC auction sale will commence on Thursday 18th March and will run until Saturday 27th March. This sale will comrpise of the best birds in the United Kingdom, from winners, Section winners and birds bred in the purple. The auction sale is being hosted by: - www.comparethepigeon.com Visit the website www.CompareThePigeon.Com and get yourself ready to bid for the best!
Read More...

639
Great news! The National Flying Club Committee have managed to secure the venue to hold a double presentation for the 2020 and 2021 season. A great weekend of celebration in the beautiful resort of Torquay with the 2020 presentation taking place on the Friday evening, followed by the 2021 presentation continuing as planned on the Saturday. This is a fantastic opportunity to give due recognition to the National Flying Club winners over two seasons in one weekend by the sea. Plans are forging…
Read More...

2021 Race Program & Race Dates for the next ten years

The following is a scheduled race program passed by a sub committee, which is yet to be confirmed by the management committee.  These race points and dates for 2021 are subject to change re Covid 19 restrictions etc. 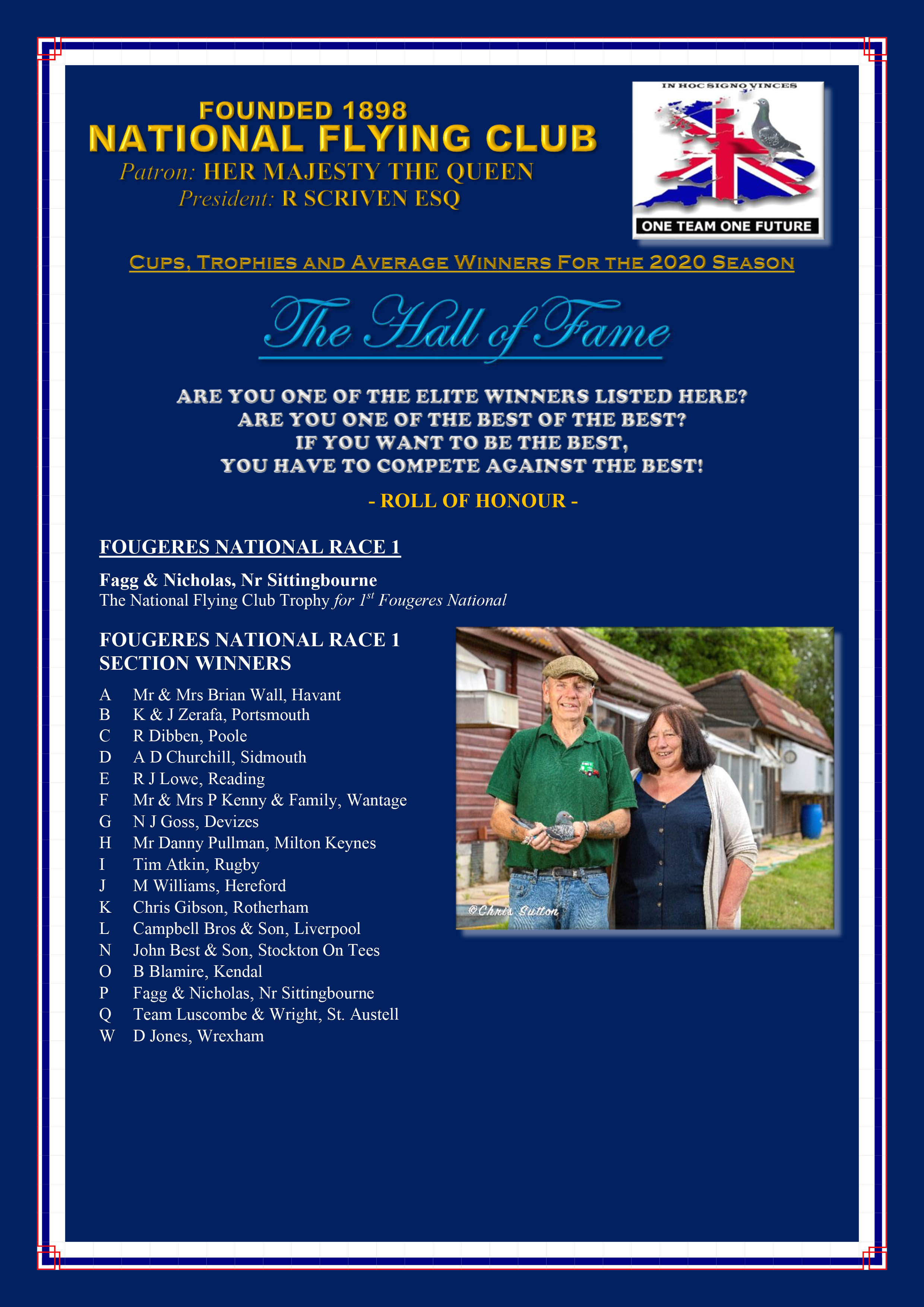 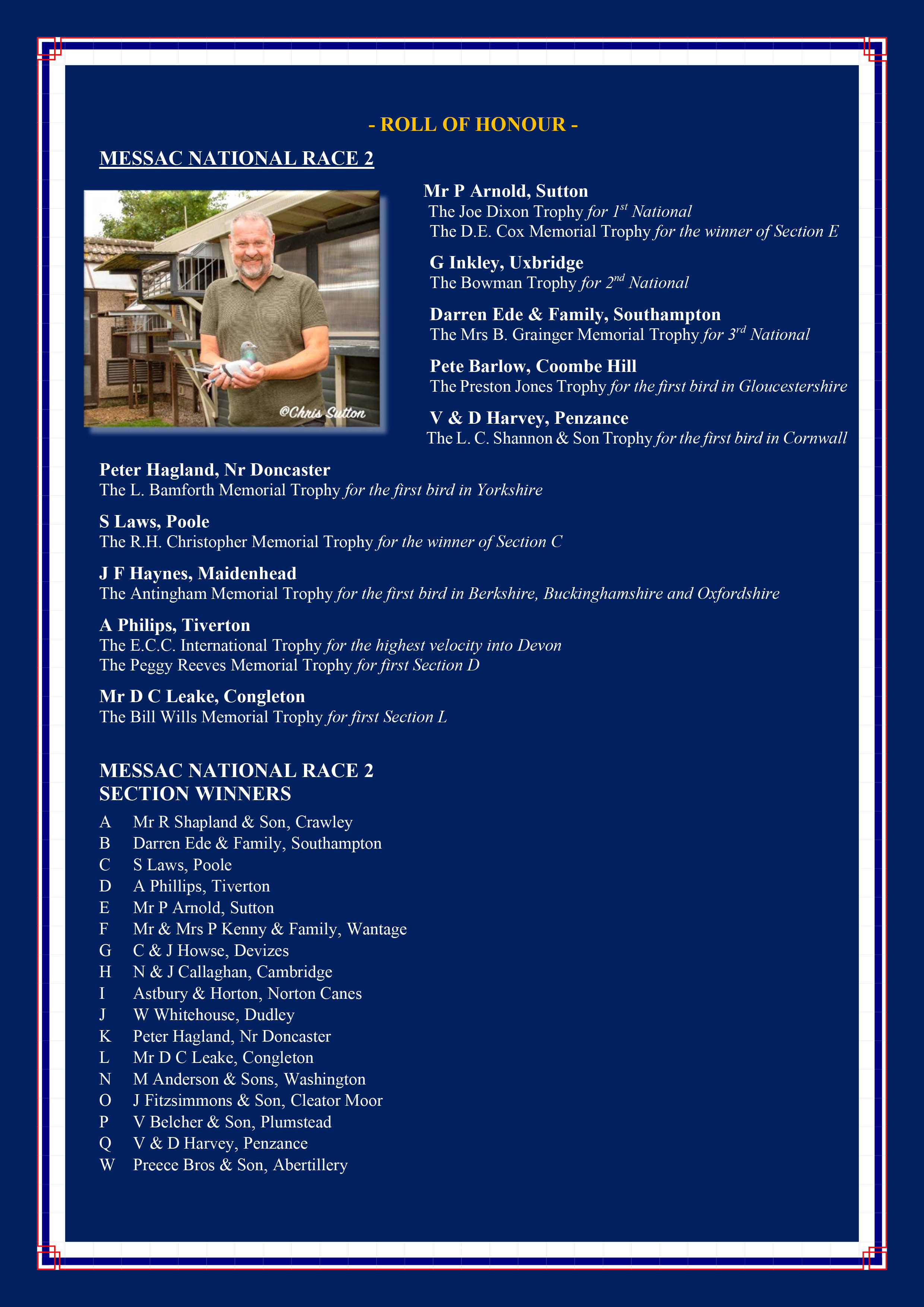 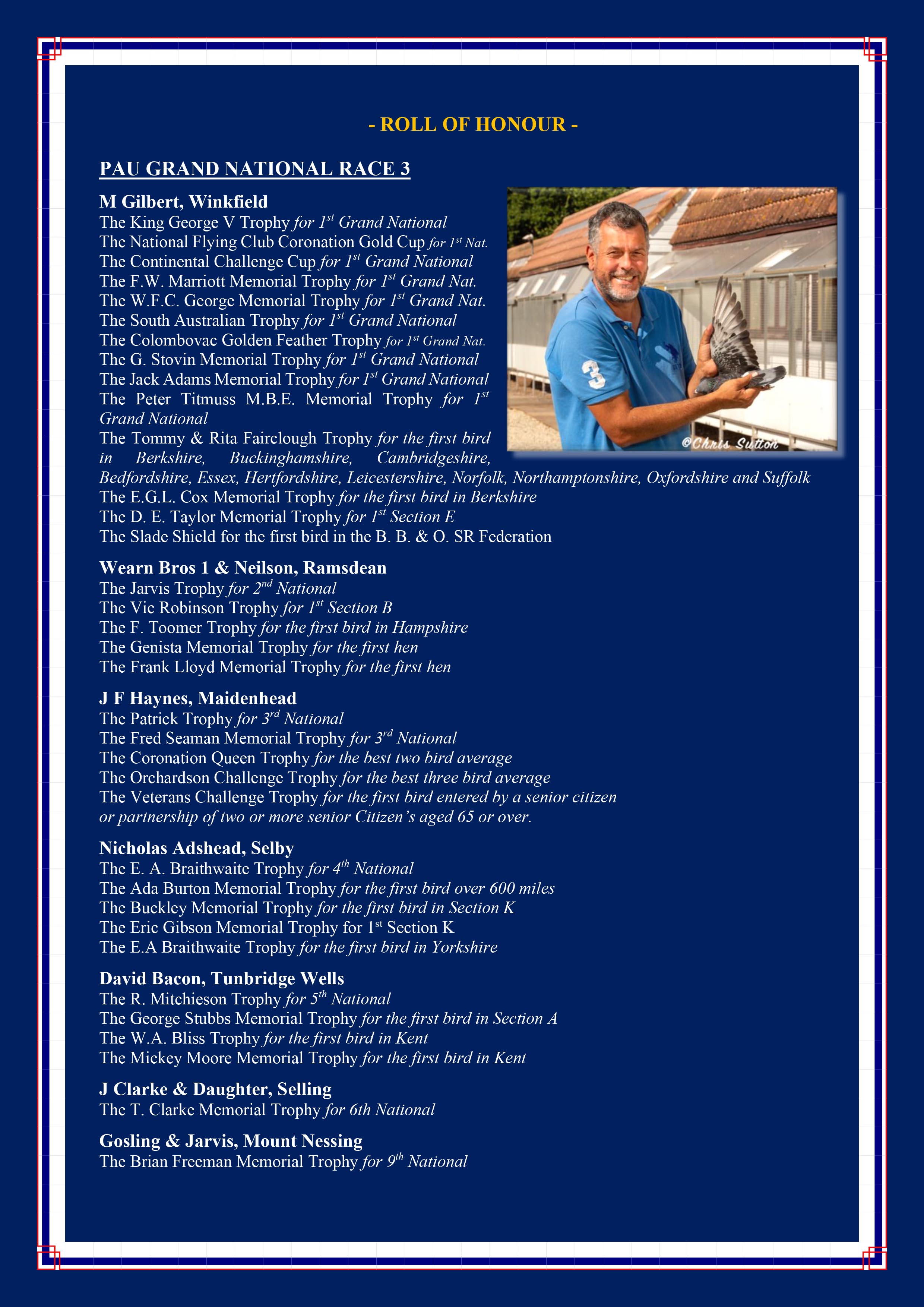 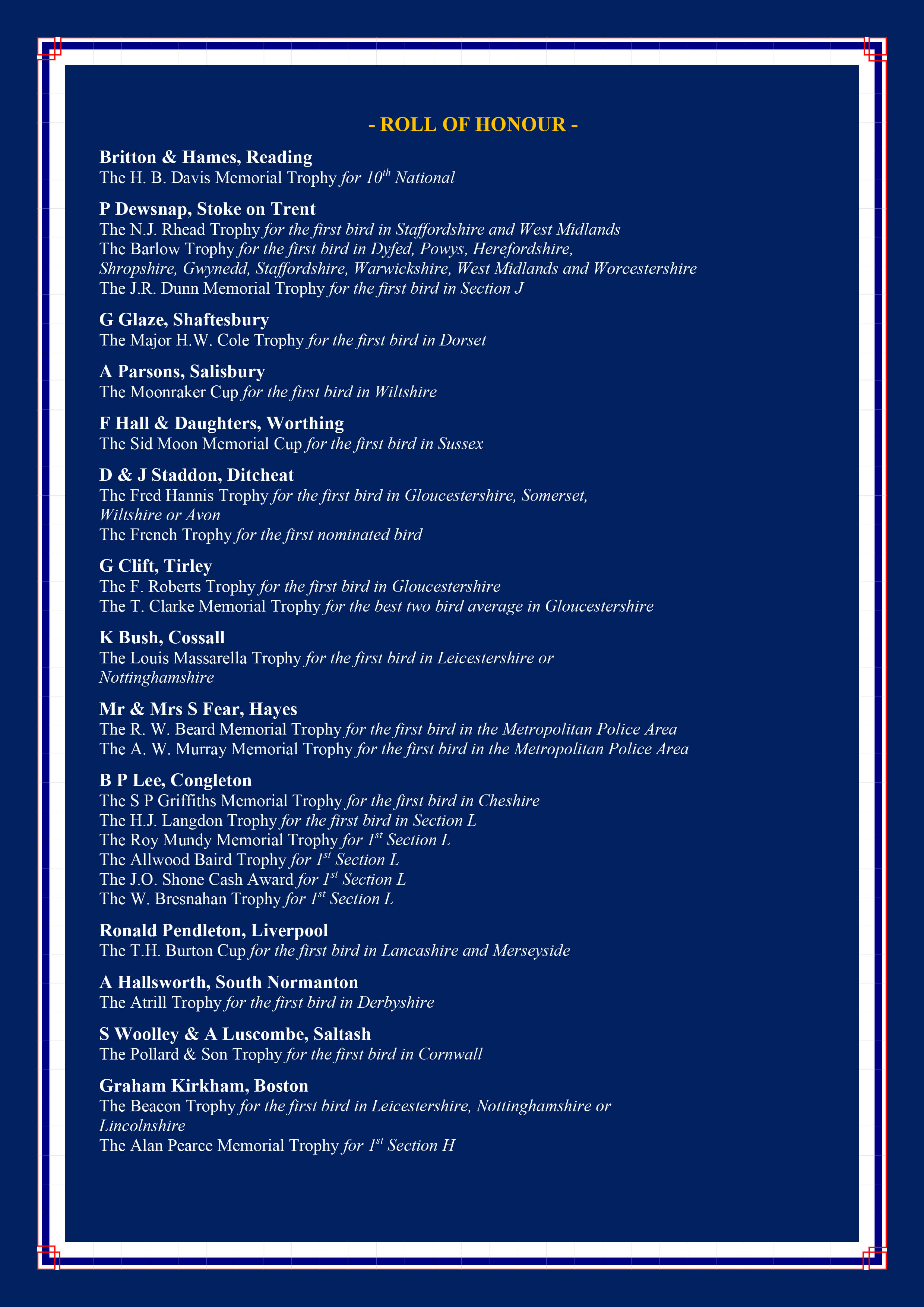 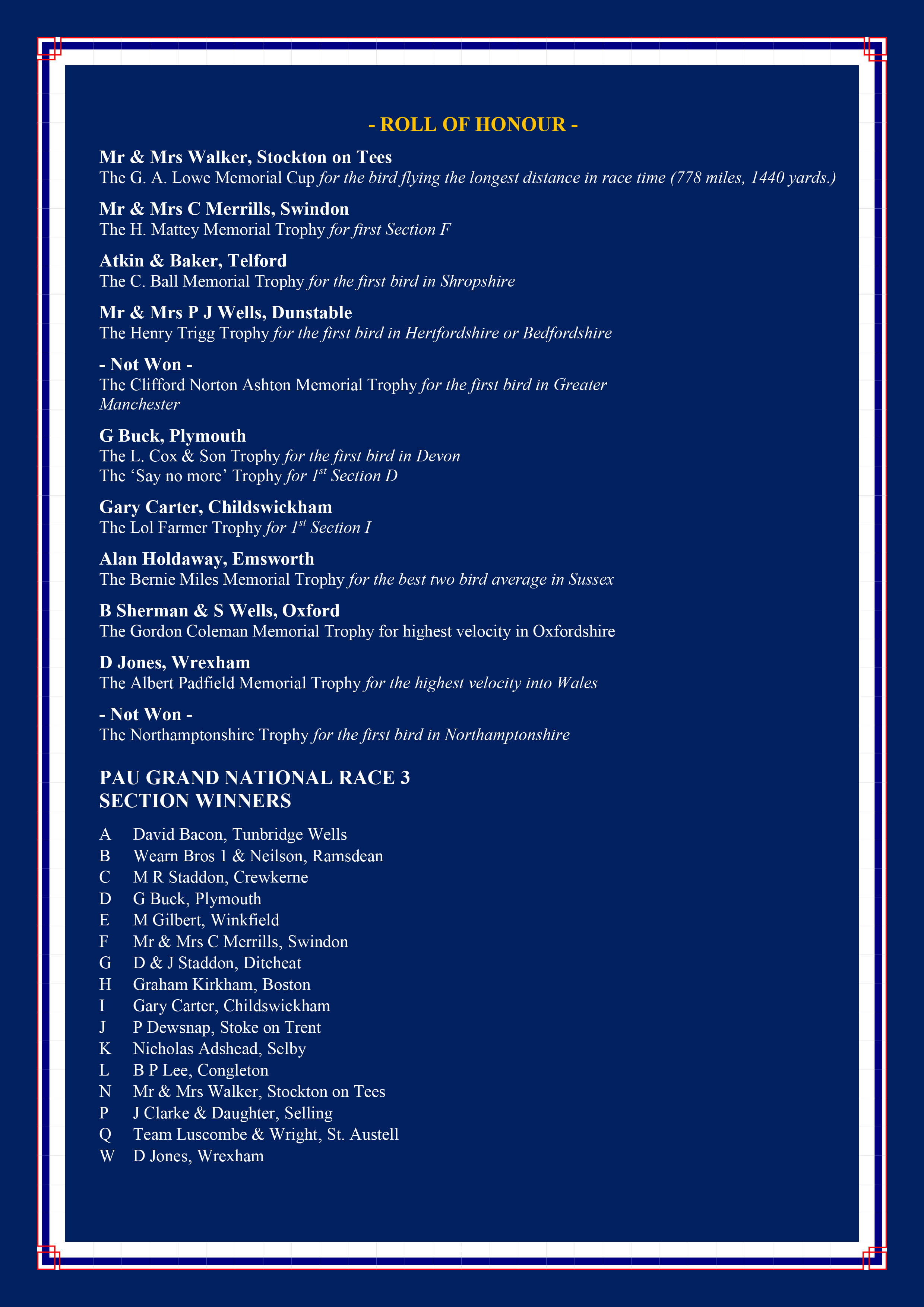 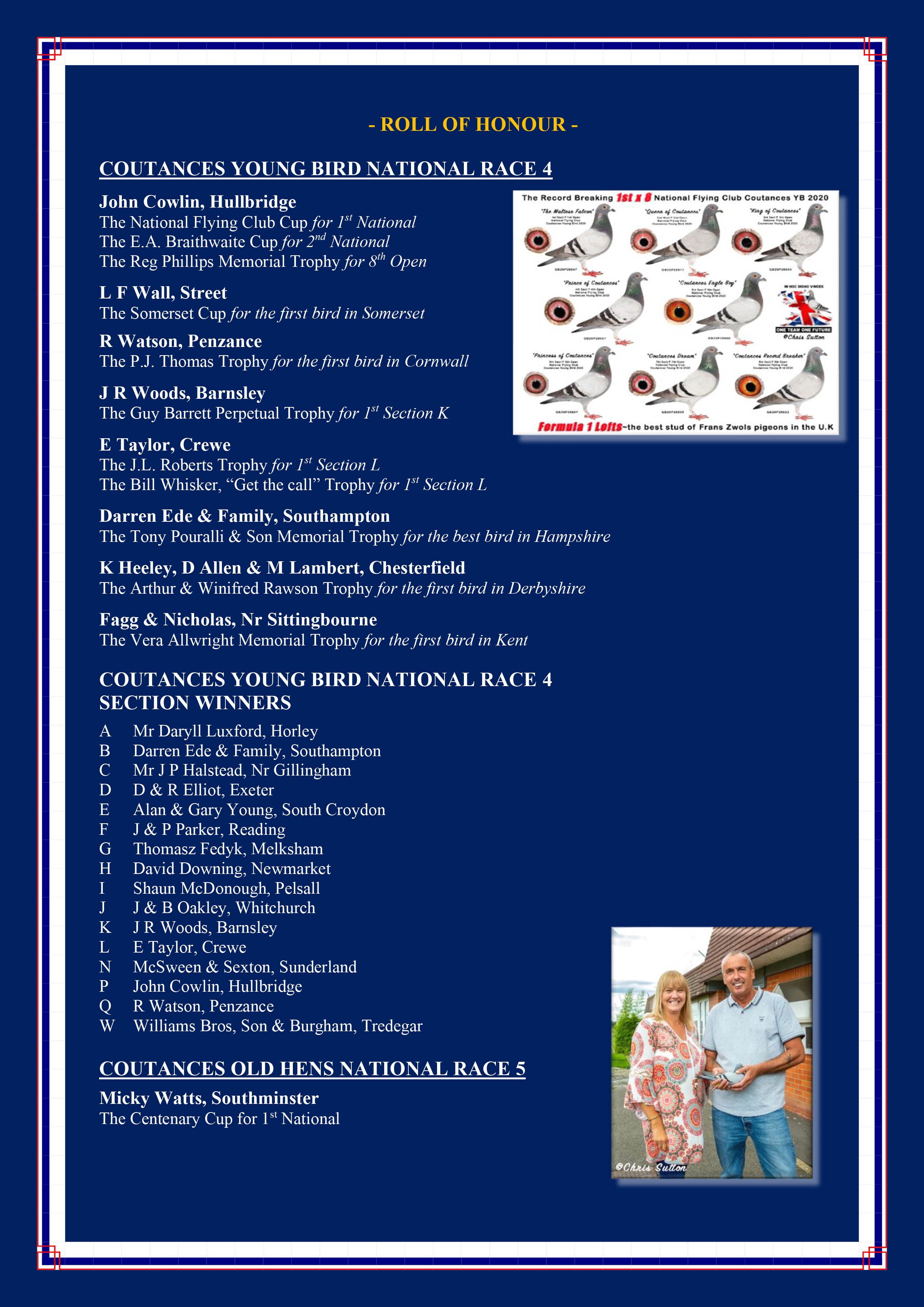 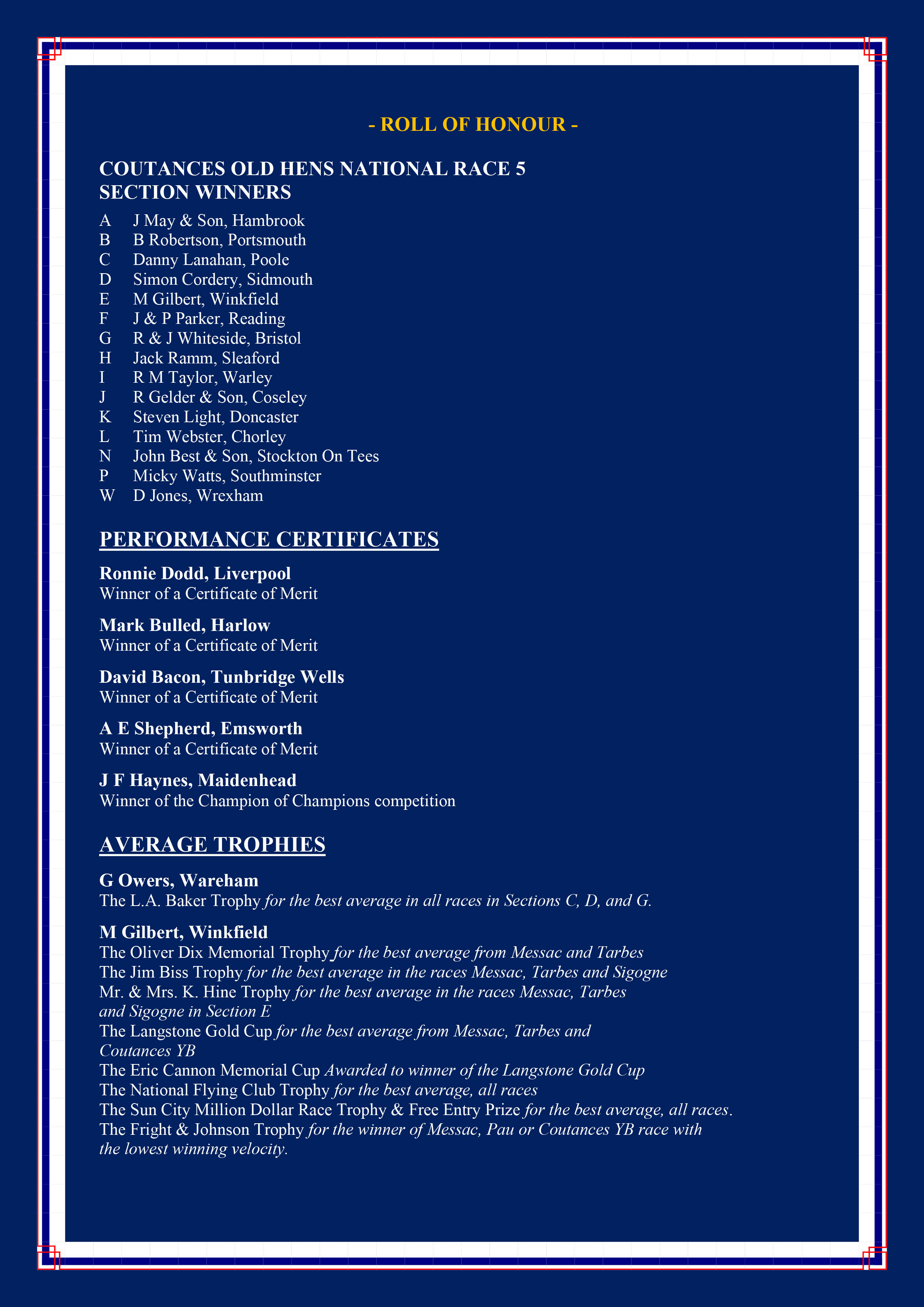 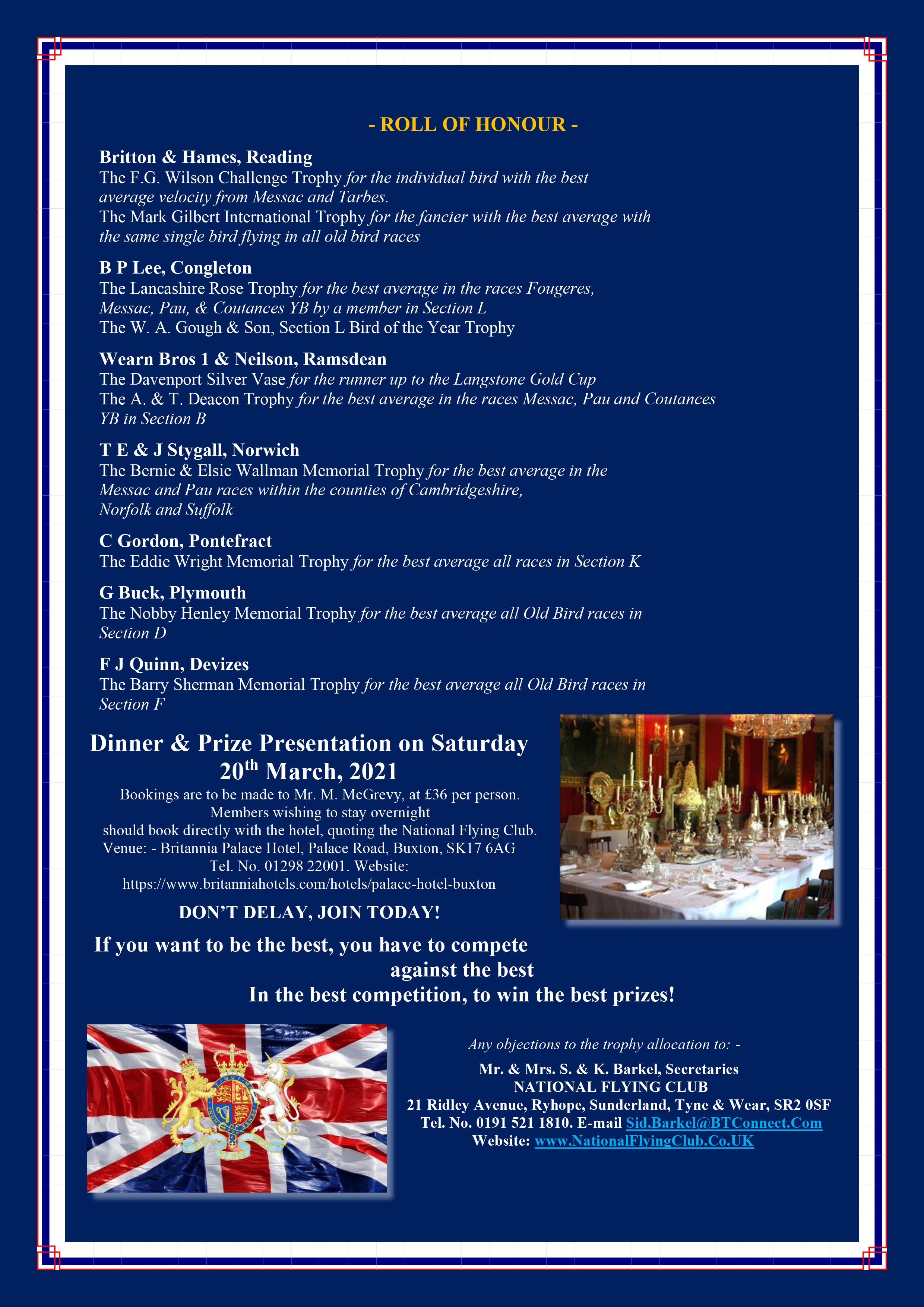 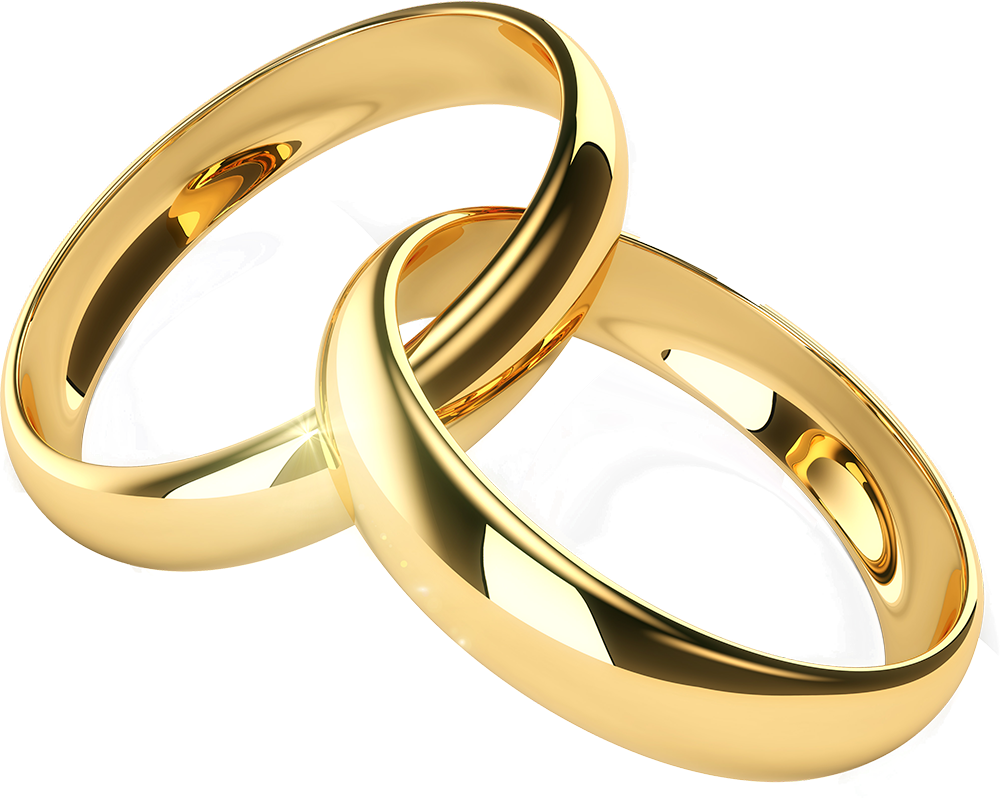 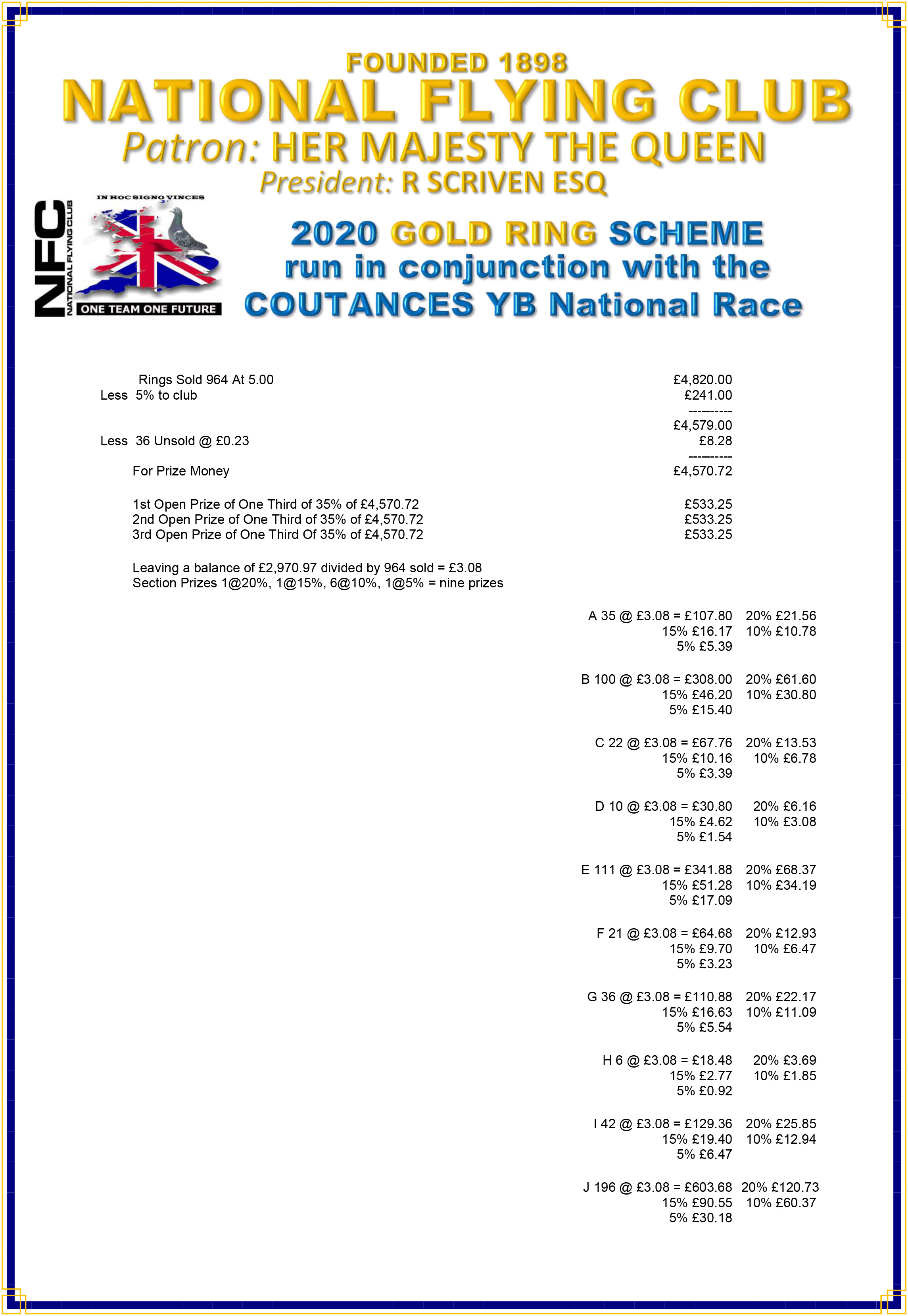 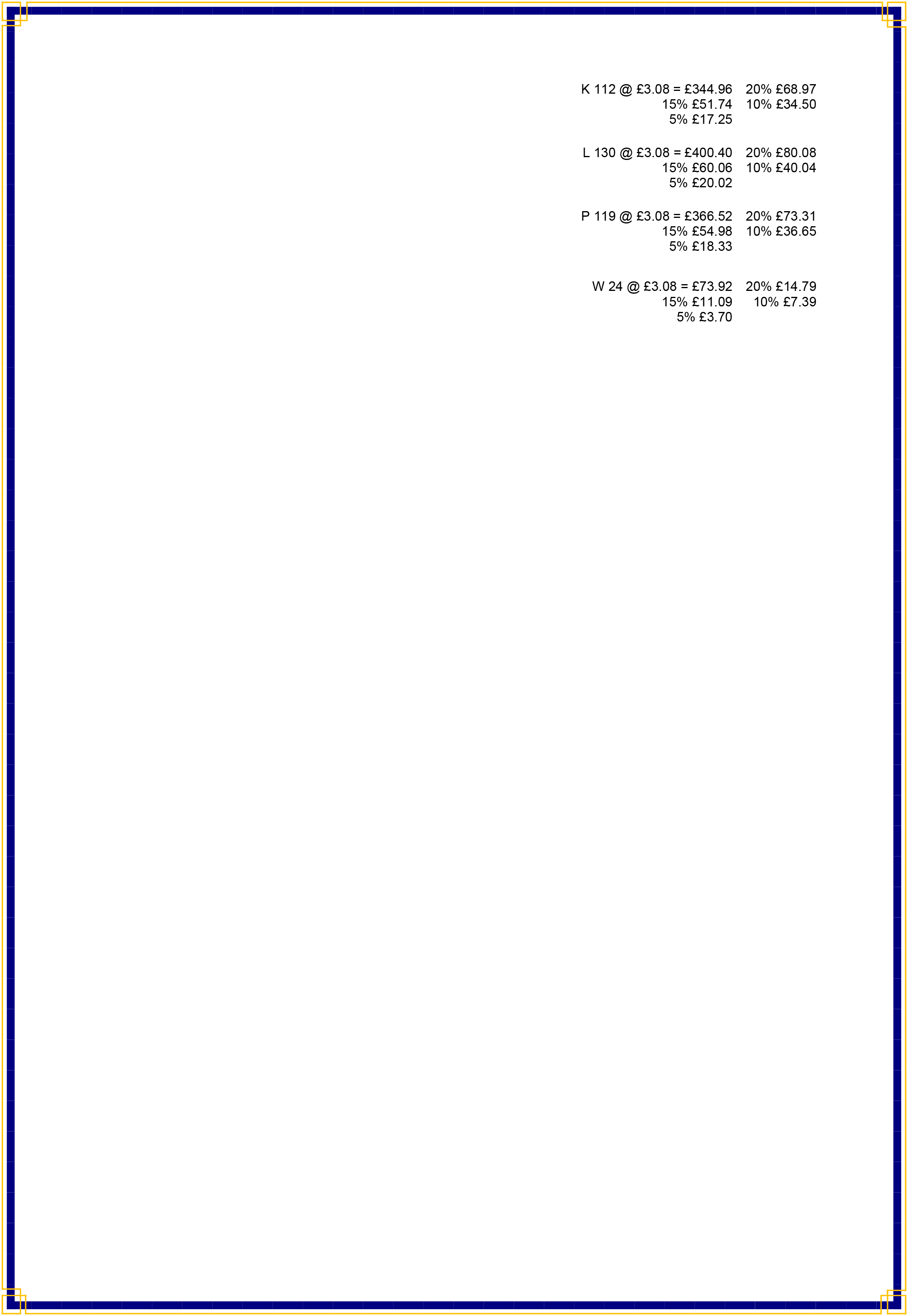 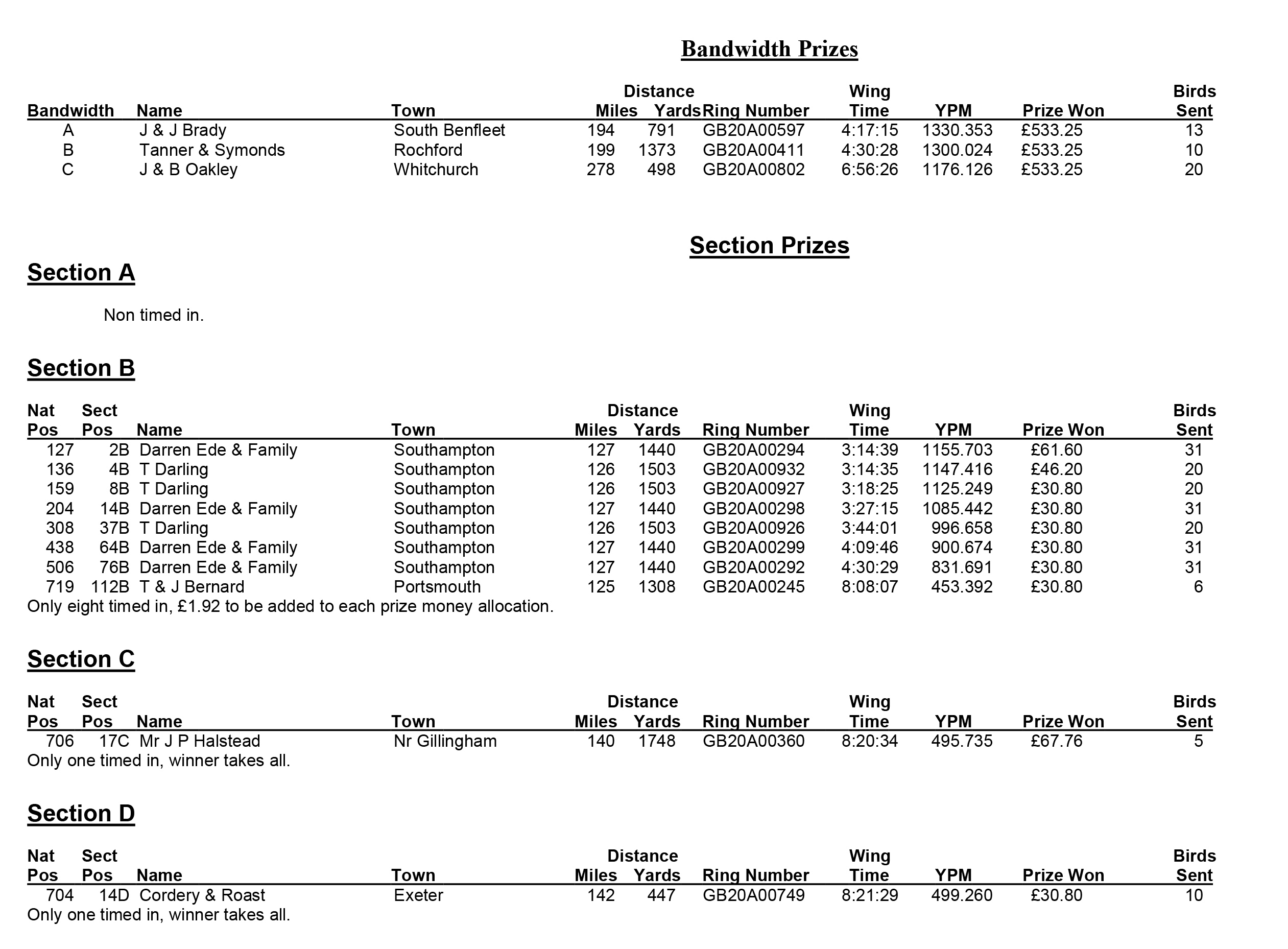 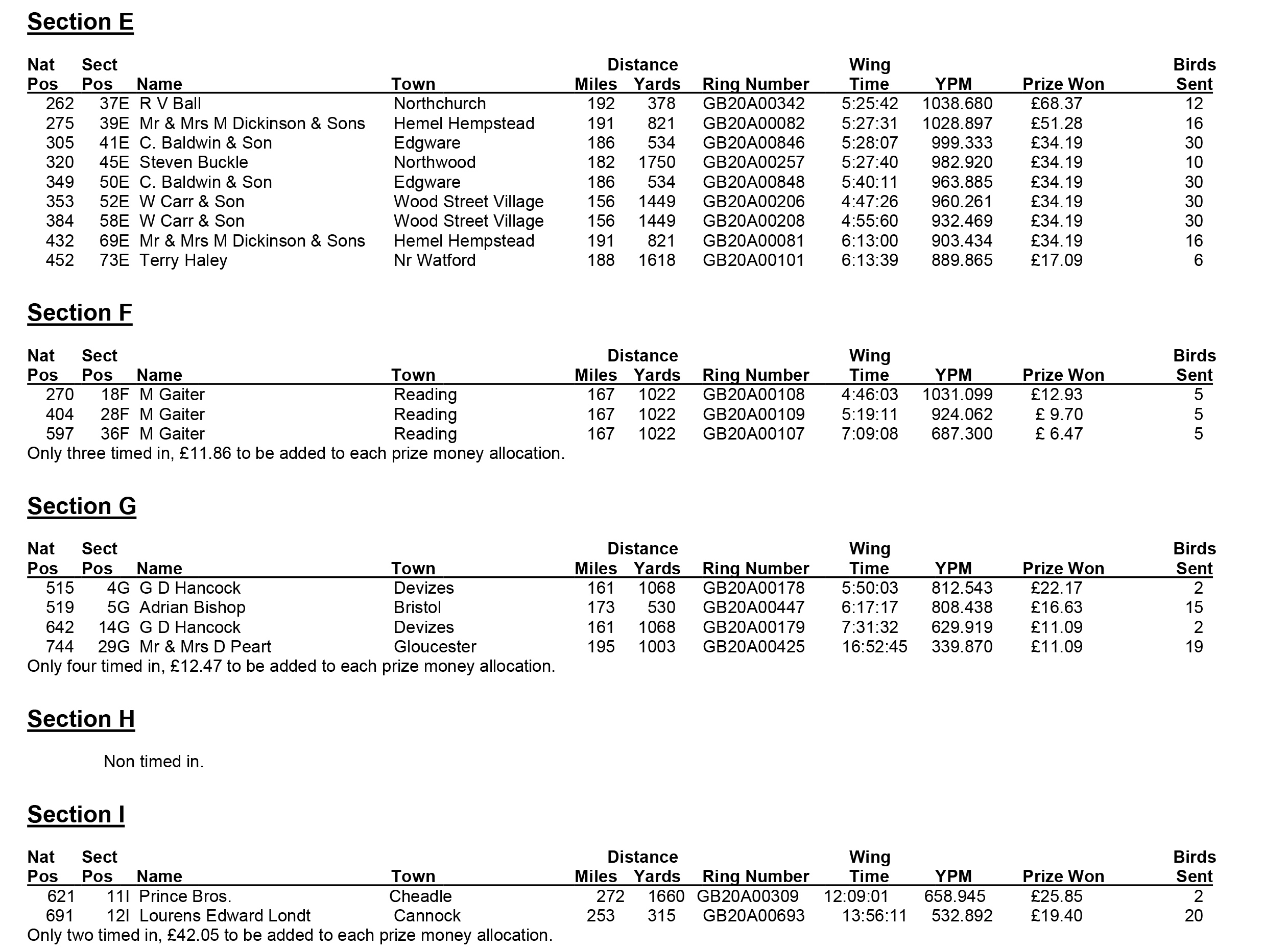 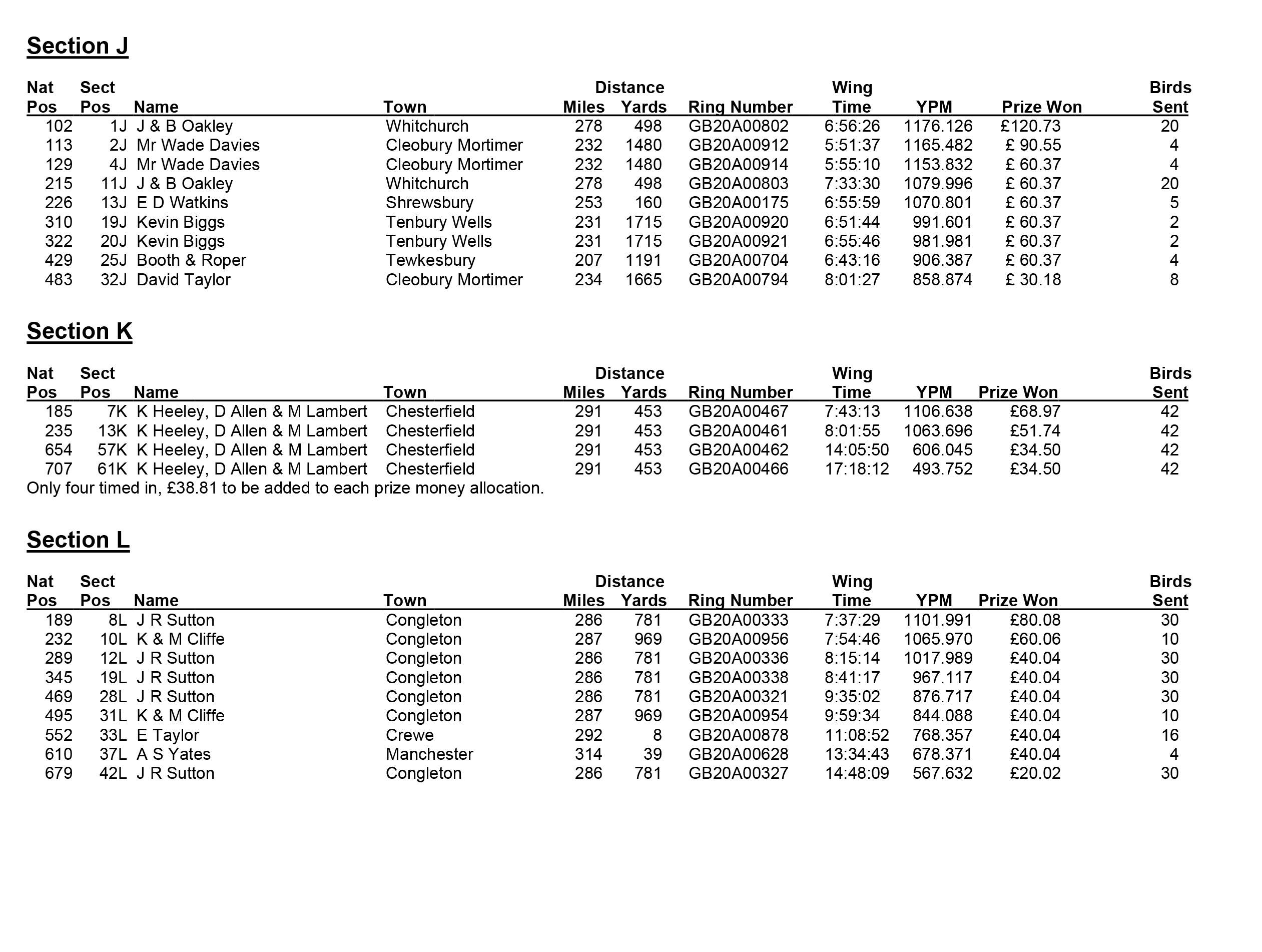 The National Flying Club October Committee meeting was held on the 21st at Alverley with just six Club Officials taking part due to government restrictions. In attendance was the President Ray Scriven, Chariman Mr Paul Naum, Honorary Treasurer Stephen Beardmore, Mick McGrevy and John Edwards for Transport with Chris Sutton taking the minutes in the absence of Club Secretary, Sid Barkel due to travel restrictions. The minutes of the previous meeting were distributed to the full committee by email and invited to raise any matters for discussion.

The Chairman opened the meeting at 9:50 and as there were no apologies he moved on the item 2 on the agenda and the minutes of the previous meeting held on the 7th of December 2019 were passed as a true record. There were no matters arising so the meeting moved on to item 4 were C Sutton read out correspondence forwarded on by the Secretary via email.

One of our members has had an issue highlighted by the Secretary regarding the correct allocation of German ring numbers on the Unikon system. The NFC Secretary wrote to Unikon for clarification and was given a set of instructions which did not resolve the issue for our member, who then contacted Unikon himself and was told via email that it is not possible to use the full ring number with the UK software package provided. The meeting decided it was an issue for the RPRA to resolve. The Chairman will instruct our Secretary to write to the member suggesting he takes the issue up with the RPRA in order to race his German rung pigeon in the future.

Item 5 was the Accounts and the Honorary Treasurer gave a report on the year’s accounts to date. He stated there would be around £3k loss on the race finances but this was subject to final confirmation. Subscriptions were down by £1700 and he felt it was due to the overall decline in the sport, which may well be the trend over the coming years. It is 65% of our revenue but he was confident that no increase in subscriptions will be required, other than as stated in the rules. Stationary, printing and postage costs are a large expense although the ring sales have held strong, being up by £300. Ring sales contribute very highly to our running costs and the refurbishment of the two transporters were included in the report. This was followed by a lengthy discussion on the general running of the club in the future.

Item 6 on the agenda was Convoyers and it was agreed that the convoying team did a great job under the stewardship of Chief Convoyer Mr Dom McCoy, who will continue to organise his assistants as required. Mr Edwards queried their being only 22 birds per crate for most races in 2020 when the NFC crates can easily accommodate 29 birds. It was felt that 22 birds per crate ensured the maximum comfort for the pigeons especially young birds and where two transporters were being used, it was deemed most beneficial to keep the crate numbers as low as possible.

Item 7 was the race program and although one was submitted for consideration by Richard King, showing a reduction of one race to allow for a three week interval between races. It was felt that as the race program was already set, other large organisations have respectfully avoided clashing with the NFC, so it should remain as higher birdage could be easier achieved by all concerned and races held every two weeks was most beneficial. The birdage costs were discussed and the meeting decided that they should remain the same as 2020 for the forthcoming season. The prizes monies will also be as 2020.

Item 8 was the yearly handbook which was discussed at length and it was decided to continue with the current format for 2021 but be under review for the following years.

It was proposed that an instruction page to be included to assist our members with payments etc and online race entries must be done by 12 midnight on the SUNDAY prior to the race with the postal entries to be in the hands of the Secretary by the Saturday before the race which would allow the transport team to maximise the allocation of crates in time. The club still had to issue some payment of prize monies by cheque as not all members had given their bank details for electronic transfer. It was understood that it can be an issue for some but in the future no cheques will be issued, and all members are to receive prize monies by bank transfer to save money in future. Just an account number with a sort code is all that is required, and the Treasurer pointed out that the payment method is secure and these details are clearly displayed on all cheques anyway.

Item 9 on the agenda was the marking stations and a letter was received requesting a marking station at Denham in Buckinghamshire, which would be run at no cost to the NFC. It was stated that this would save a 2-3 hour round trip to Steventon or Reigate for many members in Sections A & E, and they would also have a secure place to hold the NFC crates overnight. This was given due consideration and deemed a positive move although on the proviso that it would be at no extra cost to the club. All other marking stations were discussed in turn and it was decided that Steventon will remain open as will Bridgewater although the marking stations at Reigate and Ash will be closed. The Chairman Paul Naum has stood down as I/C for Bridgewater and a replacement still needs to be found. The Covid restrictions were handled very well by all the marking stations although a £400 deposit will be perused by the Treasurer as a marking station closed due to Covid and was not available for use for the full program.

The presentation evenings for the 2020, 2021 and 2022 seasons were the next items on the agenda with Mick McGrevy happy to continue with the planned presentation in March as he considered it too early to cancel at the moment although a decision will be made by the end of January. He was asked that if the 2020 dinner had to be cancelled, would we still go to Ripon in 2021 and he replied that the 2021 venue had already been booked due to such a long lead time required. The club is remaining positive regarding the 2020 presentation, as we feel that due recognition is best given to the winners with the full adulation of their fellow members and peers. There is tremendous prestige in winning the premier club in the country, against the whole country, and the standing ovation for the Pau Grand National winner is simply magical, so we are holding on until the last possible moment in the hope of it going ahead as planned in March.

Item 12 was Propositions for the AGM and Richard King had proposed that the AGM be moved to the last Saturday of January but as the restrictions are unlikely to change for the foreseeable future, the Chairman decided to cancel the AGM altogether. Item 13 was sponsorship and the meeting were informed that Chris Gibson of Northern Premier Auctions will be continuing his sponsorship of the “Champion of Champions” plus the RPRA will be sponsoring the Pau Grand National as a joint race with the BBC and CSCFC, as they had expressed their intention to come to Pau with the NFC once again with other organisations welcome to join in the RPRA UK Masters. The House of Aarden and other sponsors for the 2020 season will be contacted directly by the Chairman as the BHW Show of the Year has been cancelled, which is when he would normally thank you all in person as he prefers.

Item 14 was the NFC Young Bird Auction and it was decided that as always, the 2019 was a great success and thanks go to section W committee member Stuart Treharne along with John Burgham at comparethepigeon.com auction website for making it all so seamless for the club. For 2021 it was decided that there will be just one sale which will be held in March and all committee members are asked to encourage donations from their respective sections.

In any other business for item 15 on the agenda suggestion came forward to alter section C as it has a very small radius compared to others and the prize money is low as a consequence, but the Chairman pointed out that the proportion of membership was high in the section. He also stated that there are 60 members in section Q which has also been queried as to its viability, but again the membership should be encouraged to send rather than abandon the section altogether. A full review of the club rules has taken place with four committee members putting a lot of work and giving several suggestions for improvements, this will now be passed to the Secretary for his input before taking them any further at this point. With there being no further business the Chairman thanked those for attending closed the meeting at 13:20pm. 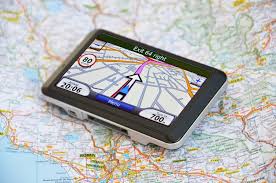 Attention All Members - See The GPS Location of the NFC Transporters!