It was the news that all members of the National Flying Club had been waiting for, when Race Adviser Steve White and Chief Convoyer Dom McCoy finally announced that the birds had been liberated into beautiful sunshine, at 10.00am on Monday the 6th September to commence the Guernsey Young Bird National and combined Old Hens National sponsored by The House of Aarden Stud and Benzing. The wind was a light north easterly at around 7mph in the channel turning light South Easterly on the mainland and Dom said “It was a great liberation, all birds cleared site within two minutes and climbed high like little dots! Good luck to all.” This had come after a two day holdover due to the heavy mist and fog in the channel and a young blue hen called “Little Faith” belonging to Mike Lovelock of Shrewsbury, had passed the time thinking of her nest back at the home loft and won the National Flying Club from Guernsey by recording a velocity of 1380 yards per minute or 47 miles per hour. 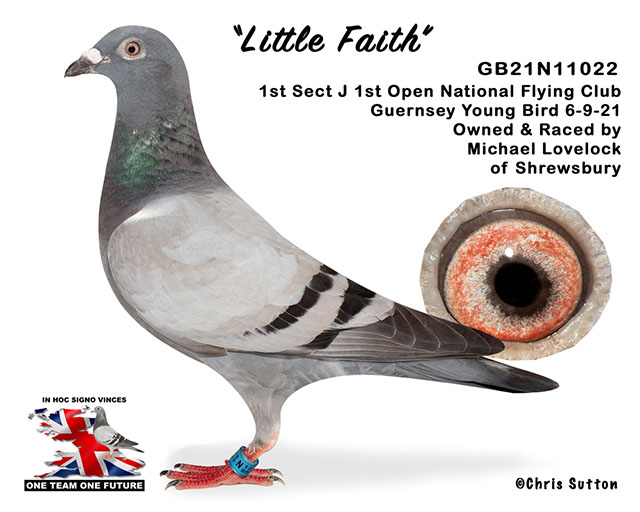 She was bred in December of the previous year along with around 60 others and was weaned into the young bird section just as two pairs of Sparrowhawks were claiming the same territory to begin the spring breeding season. Each and every day when the young pigeons were given time out of the loft the hawks made their presence known and unfortunately quite a few went missing with “Little Faith” being one of them but after a few days she returned although she had broken her leg clean through in her panic.

Mike initially thought she was a stray bird because she had been gone for so long and after his inspection, he realised her injury required some attention and he nursed her back to full health, although the break was very severe and quite high up her leg. This caused him to think her racing days were finished before they had even begun, which is how she earned her name as she has now repaid his kindness twice over, having first won the local club and then raced back to her second nest of eggs, to win the National Flying Club. In fact, she is part of a young bird team that has truly reached top form at the right time as the week previous, Mike won the first 12 positions in the Shropshire Federation. 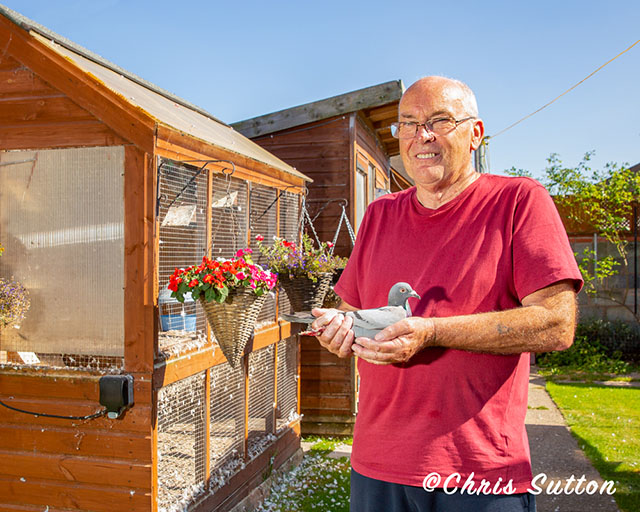 Her sire was bred by De Ruijter from his Leo Herman lines and the dam is of Steffan Lambrecht bloodlines via Hans and Evert Jan Eijerkamp in Holland and bred from a pair of pigeons given to Mike by Team Eijerkamp as a good will gesture in appreciation of his regular custom. They advised him to couple the pair together and he was first rewarded in 2019 by winning the British Barcelona Club from Fougeres in a race that 224 members sent 1,690 birds, as well as second and third by timing three yearlings on the same minute from a 311 mile race from France and now the same pair have bred “little Faith” to win the NFC young bird race when 274 members sent 2625b plus Benzing have agreed to sponsor our young bird race from Guernsey, and the open winner will receive a brand new Benzing system complete with a SmartHub for live racing. A huge thank you to Benzing and the House of Aarden Stud who will also present Mike with an August hatched young bird to the value of £500.  Whilst I was visiting Craig Chetwood, NFC member and Secretary of Wreakin FC came to assist in the verification of the bird and we spent a few minutes discussing the ongoing topic of channel racing over a cup of tea. I informed them that the NFC Committee were meeting in October and that there are various options on the agenda for us to continue to enjoy the prestige of racing in the one true UK National for the 2022 season. 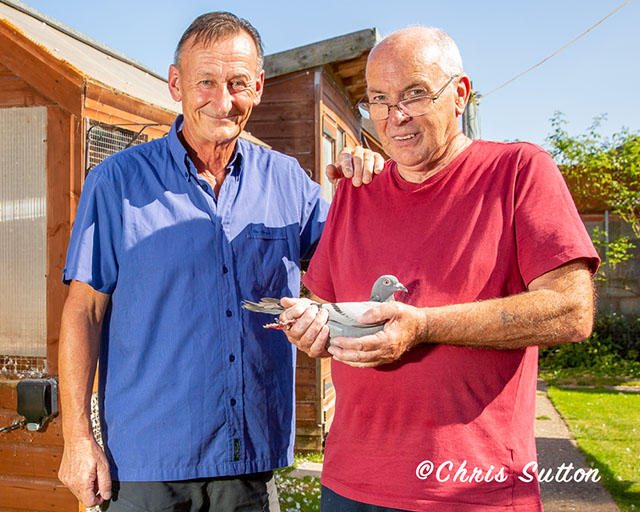 As is the same every year, the National Flying Club also hold an Old Hens race in conjunction with the young bird event and it has become a showcase of the specialist fanciers. To prepare these hens for a race so late in the season takes months of planning in order for them to reach peak condition, whilst holding back the moult long enough for them to race with a full wing and for this event 155 members entered 955 old hens from all over the country. Brian Reene of Honiton is one such specialist who entered just one hen perfectly prepared and in peak condition, she flew at a velocity just shy of the winning young bird and these two birds were each over 30ypm clear of the remaining combined convoy of 3580 birds. 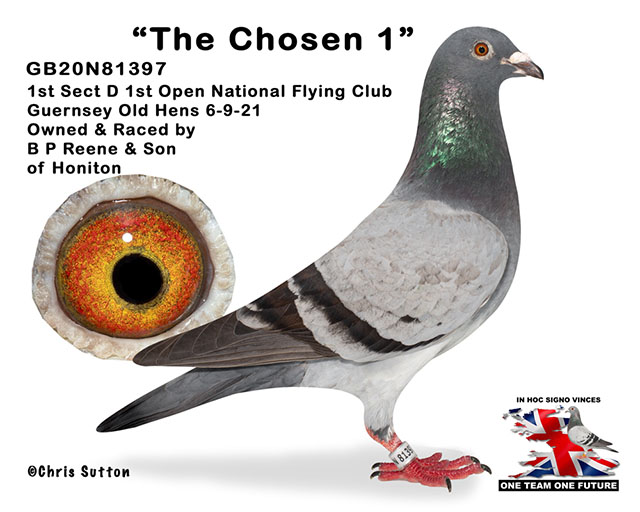 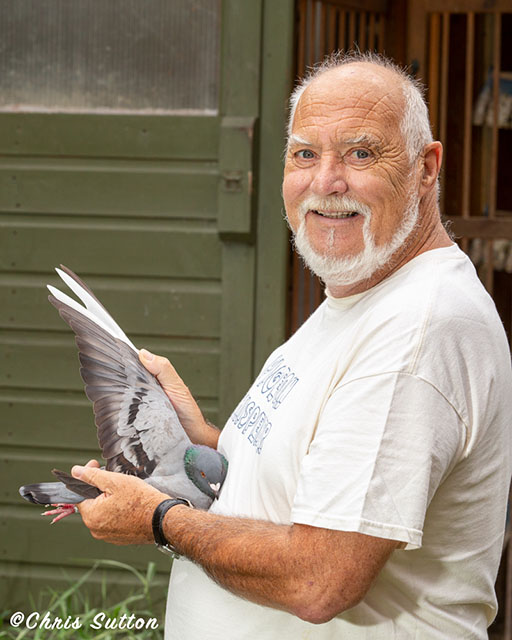 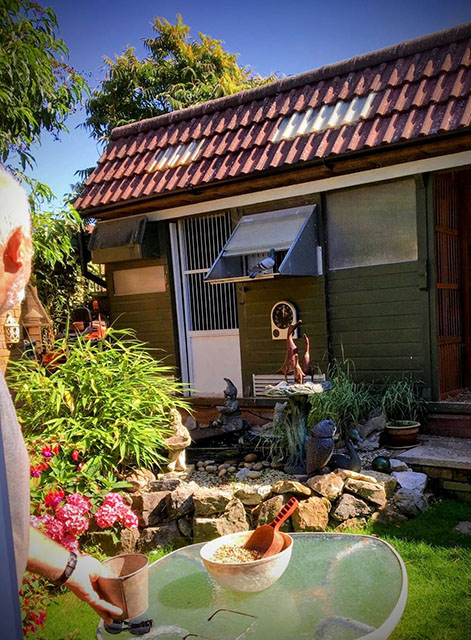 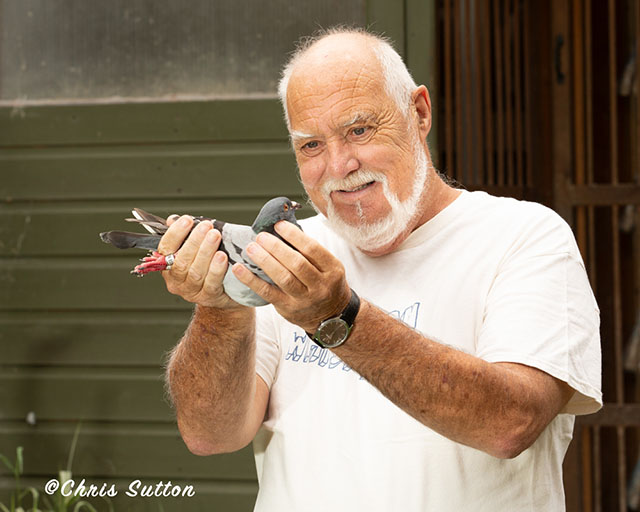 When Brian purchased “The Chosen 1” as a baby, Peter suggested she should go straight into the stock loft but Brian had other ideas as he likes to race his birds and she flew every race as a youngster, but in her yearling year she was exercised around the loft and he gave her just one federation race from the Isle of Wight as well as letting her hatch a youngster to look after in preparation for the NFC race from Guernsey. Brian knew she was very keen on her baby and although his single entry raised some eyebrows at the marking station, he grew more and more confident as the holdover went on as he knew she would grow even keener to get home. Great motivation, great preparation and a great little yearling hen having her first National race, it was a real joy to behold for Brian when she pitched in and his wife Vera managed to capture the moment on her phone for their daughter in Australia who is always interested in her Dads results as he has now won Section D of NFC 7 times and second section D 6 times and the last time he won section D he also sent just one bird. 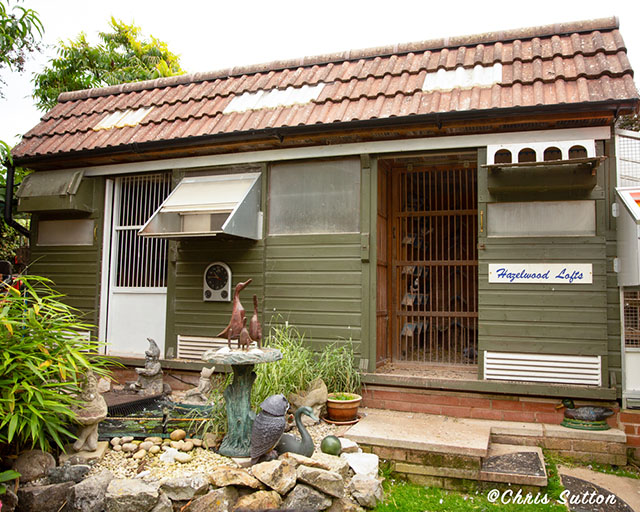 It may be a little more difficult for Brain to race her now she has a 1st Open National Flying Club herself and with her breeding being the very best distance blood from Darran McFadden are bred down from Ray Hammonds Pau, Bergerac, Palomos “Diploma of Merit Award” winners as well as Eric Cannons family, she definitely has one of the very best of British long distance pedigrees available today and with great generosity Brian has donated her youngster to the club to give all the members an opportunity to obtain the youngster and to raise club funds for future prize money. 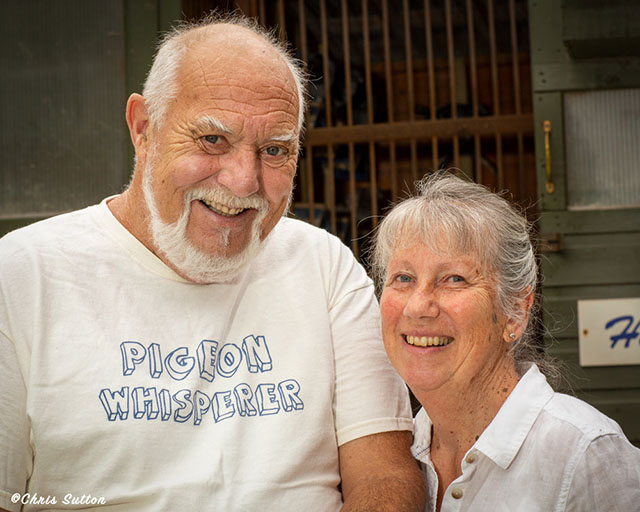 Brian has stepped up to the role of top positions in the clubs over the years including the Chairman of the Devon, Cornwall and West Somerset Continental Flying Club until ill health forced him to step down, but he has continued to run a marking station from his garage which serves the Continental Club as well as being the clock station for the NFC, BICC and BBC making good use of Brian’s years of experience. Now having 66 members the club has recently taken delivery of a brand new state of the art transporter by securing lottery funding which provides excellent racing for the far south west of the country.

Also situated in the south west, The House of Aarden have once again sponsored the Old Hens race with a youngster to the value of £500 so Brian will have yet another addition of top class long distance bloodlines to add to his small back garden loft. A big supporter of the NFC in their area, Steve and Lesley Wright of The House of Aarden Stud provide the same prize for the open winner of every race as well as the Section Q prize money for each and every race, outstanding support indeed. The Chairman has recently spoken to Steve Wright who has confirmed his sponsorship for the 2022 season and National Flying Club are truly thankful to all our sponsors for their generous donations and prizes, it is truly appreciated, and we shall continue to give full recognition of their support in the NFC handbook, website, social media and exhibition stands.

Please send me all your details if you have won a position in the top five of your section by email to and include a photograph of yourselves if possible, it really makes interesting reading how the bloodlines are performing on the Premier National stage. I will be happy to include them all in my section report, all I would ask is that you mark clearly which section and which of the two races your information is for.