The National Flying Club Grand National for 2022, due to take place from Pau on the 22nd of July was diverted to the Tarbes International race point because of construction works taking place and liberated on the 23rd of July at 4pm after a one day holdover due to low cloud. The extreme high temperatures which France and the UK had been experiencing subsided with a north westerly wind coming in and the weather through France all the way through to the northern coastline was clear with an average temperature 25C. The forecast for the following day was for broken cloud and sunshine over the channel with visibility about 11 miles and south west winds averaging 15 mph. A weather front did affect the northern sections once again, giving showers for the longer flyers.

The build-up to the race increased when the final entries came in to the Secretary and showed only a slight decrease in numbers of entries over previous seasons with just over 2100 birds entered, and although very hot, the four marking stations managed to complete all the necessary paperwork for the Export Health Certificate. At the French Customs the Chief Convoyer was asked to remove just one basket of birds and five of those inside were successfully checked against the list submitted and verified by our Vet Mr David Parsons, before being given the all clear to continue on to the race point.  All the workers at the marking stations did a fantastic job for their members and I would like to recognise their efforts. Without these willing volunteers who worked tirelessly on the hottest day ever recorded the club could not function and I am sure each member who sent would agree, you deserve a huge thank you from all concerned.

Although the preparation for the nation’s greatest race had been a little different this year as with the amount of Guernsey races we have had to endure, some of the shorter flyers would have found it difficult to build fitness in their birds. The first and very successful joint race from St Philbert in France had given them a few extra hours on the wing and once again the excitement could begin to build, with us all looking forward to a fantastic race. Over the years the grand national has produced some of the most outstanding and contentious performances and once again it did not disappoint us in both these potentials. The full cloud cover which had prevented the scheduled release seemed to descend and hang over the provisional result when an outstanding performance put in by a brave pigeon owned by Martin Williams in Hereford, had to be disqualified due to the NFC race rule 26, as it had been verified eleven minutes after the 60 minutes stipulated in the rule, and it has to be said, in the past very many good pigeons with honest performances have been disqualified under this rule, even those which would have been National winners.

It is a clear and present danger when a pigeon can enter the loft unnoticed as we all know it is not just the A to B of the bird that counts, the racing rules play their part too and no amount of commiseration can alleviate the pain which Martin must be feeling. We can only hope this devastating experience for him, is a lesson learned by all for the future, at least until the rule propositions are due for the AGM when our members can truly make a difference if they so wish, as it is most important of all to point out, these are their club rules which we all agree to abide by and can only be changed by a majority vote at the AGM.

One fancier who did follow all the requirements is Ronald Pendleton in Liverpool who timed and verified correctly a super little hen to record an average speed of 42mph over the 714 miles to his loft to win the greatest prize of his life in the NFC Tarbes Grand National. 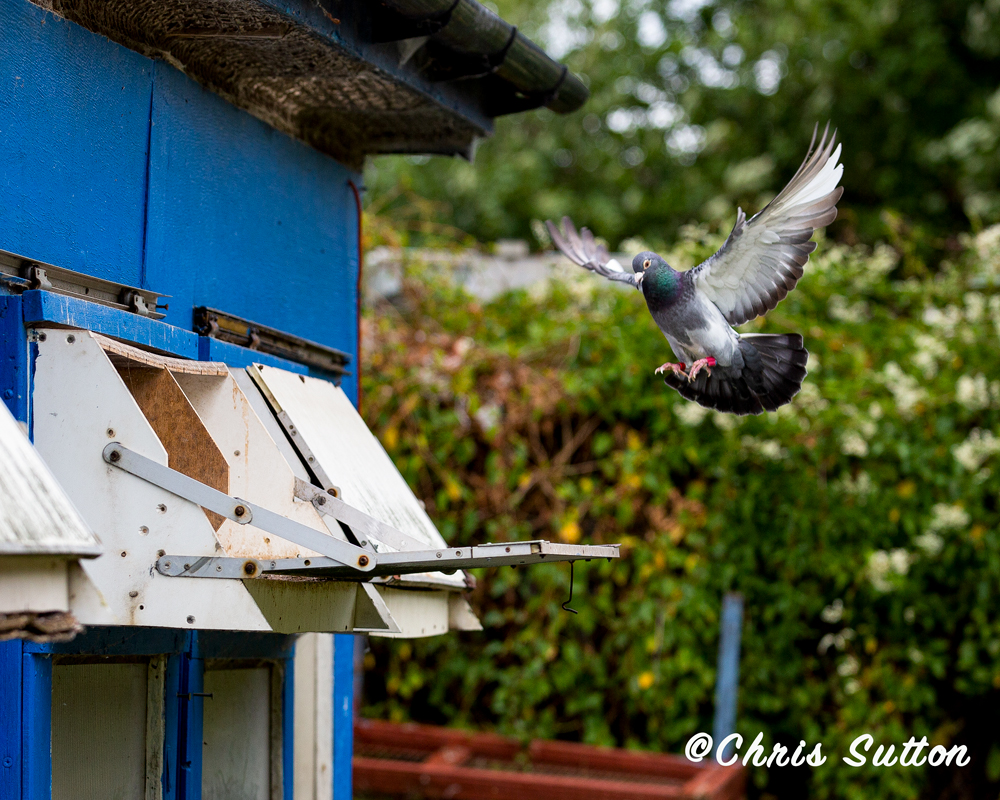 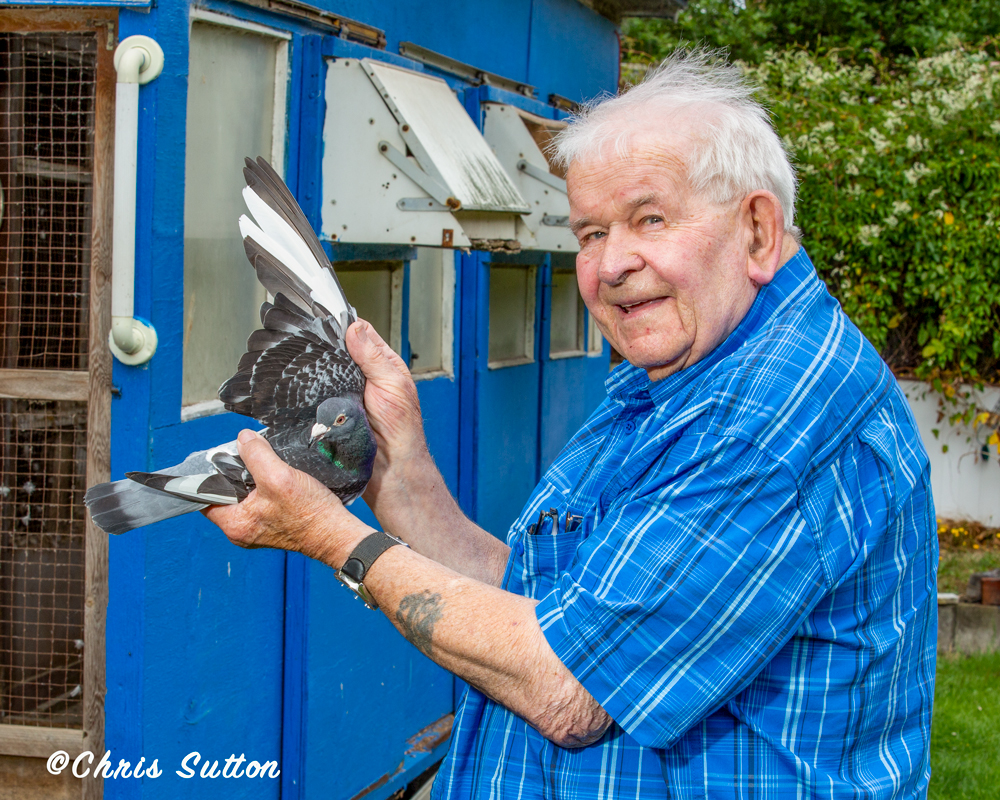 Ron is 87 years old and has been racing his pigeons for the last 60 years with his wife Sheila who sadly passed away in 2020 and has named his Grand National winner “Sheilas Wings” after the late Mrs Pendleton “She was also my partner with the pigeons and I really miss her” said Ron “she had her own little loft and would take good care of all the birds whilst I was at work.”   His son Colin helps him now and his grandson Kieran is the main loft helper who is keen to pass on the love of pigeons to his son George, making the fourth generation to race to the lofts. “Nan would have been so proud” said Kieran “the bird came direct online, flew between the houses over Nans old loft and trapped” 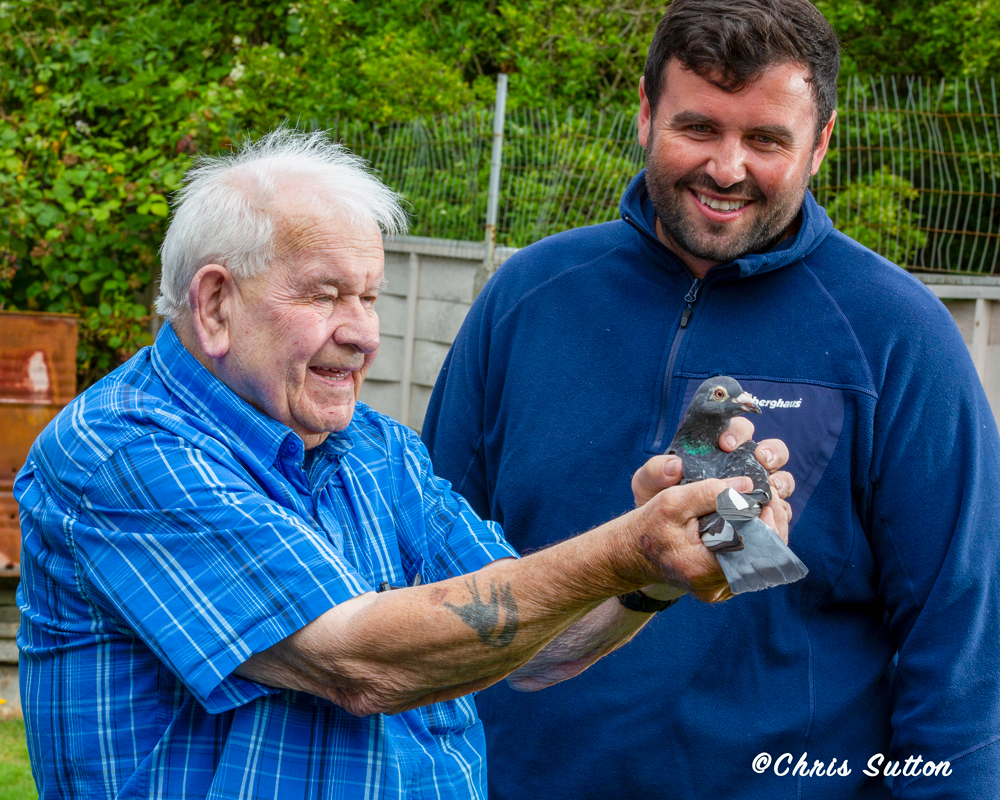 “Sheila’s Wings” won 3rd club as a young bird where she was beaten by her own loft mates, as a yearling she came home from a tough Fougeres race at 10:30pm in complete darkness and over the past few years has consistently negotiated the channel many times on the day. 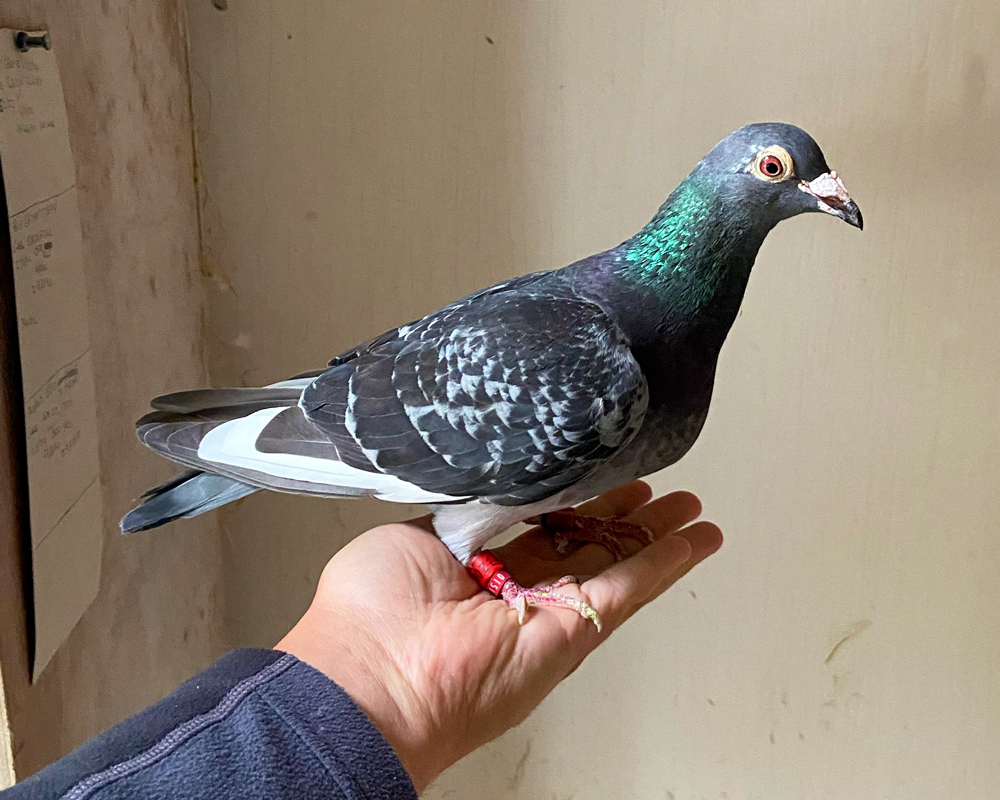 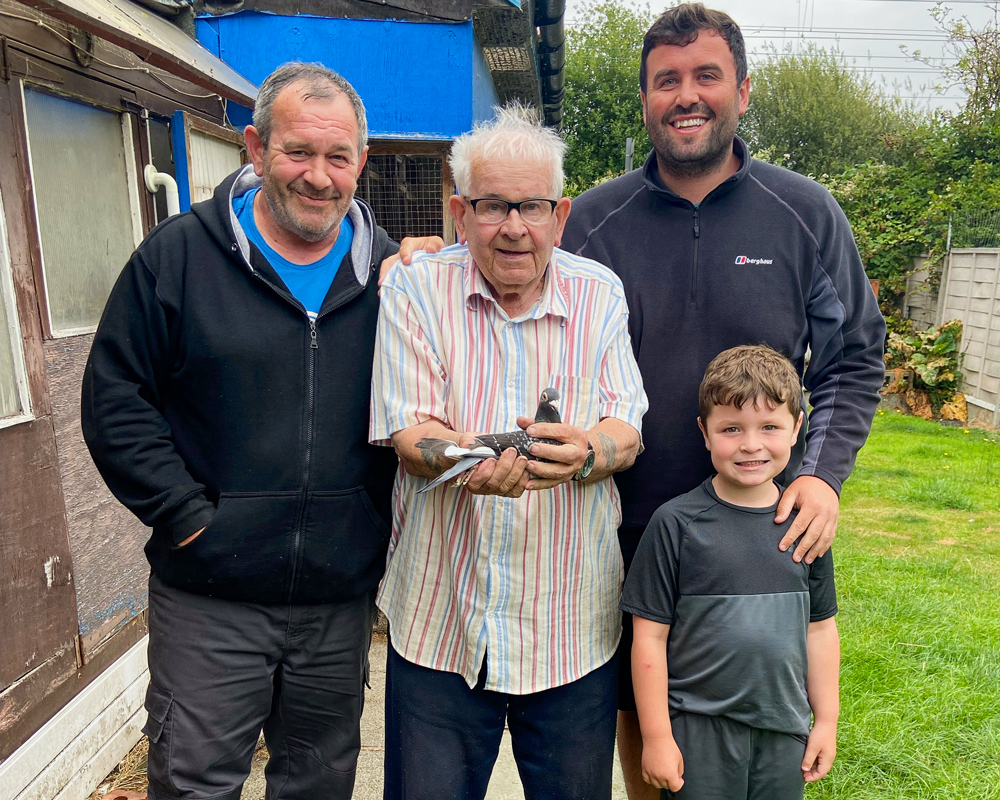 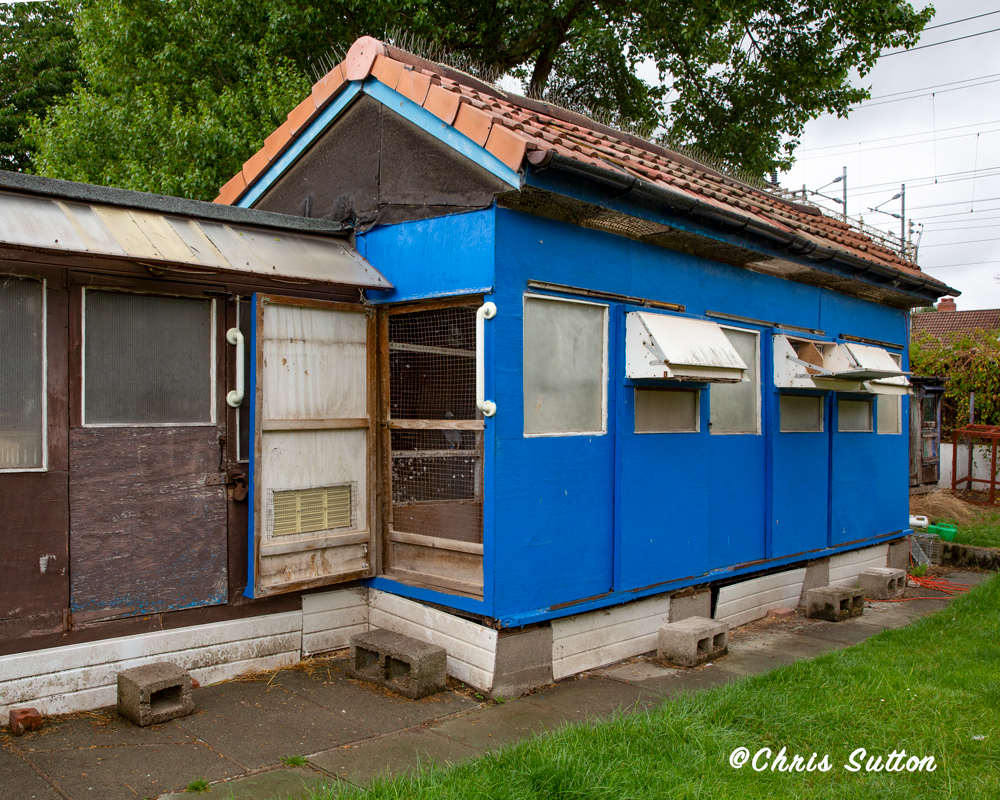 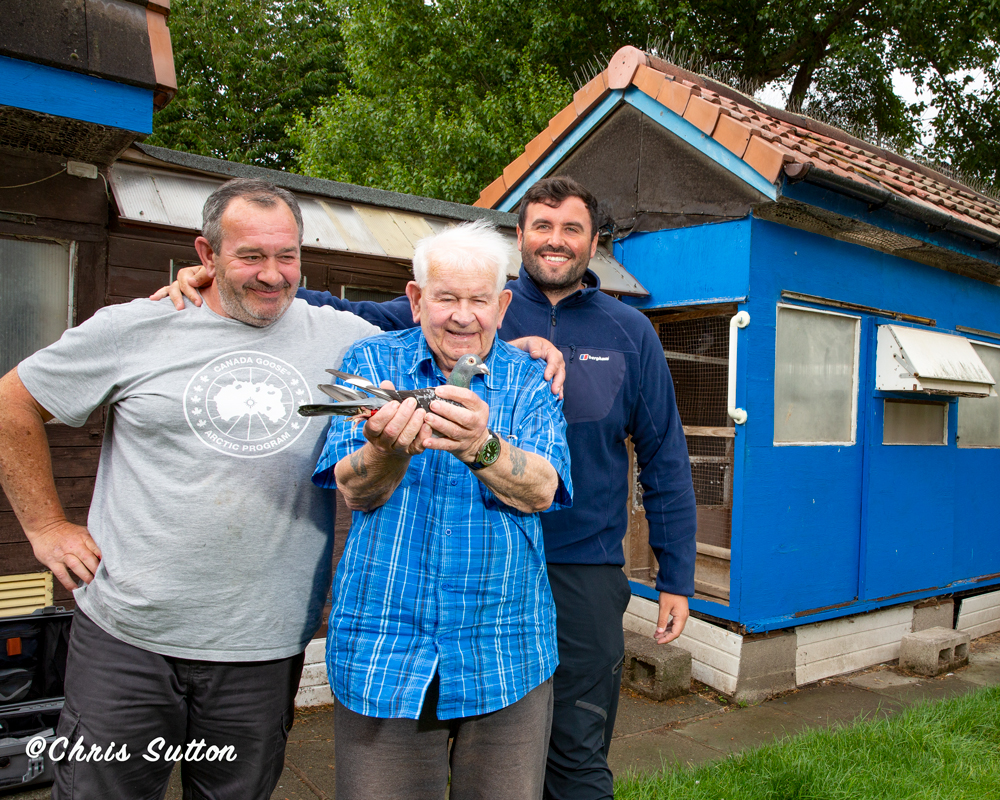 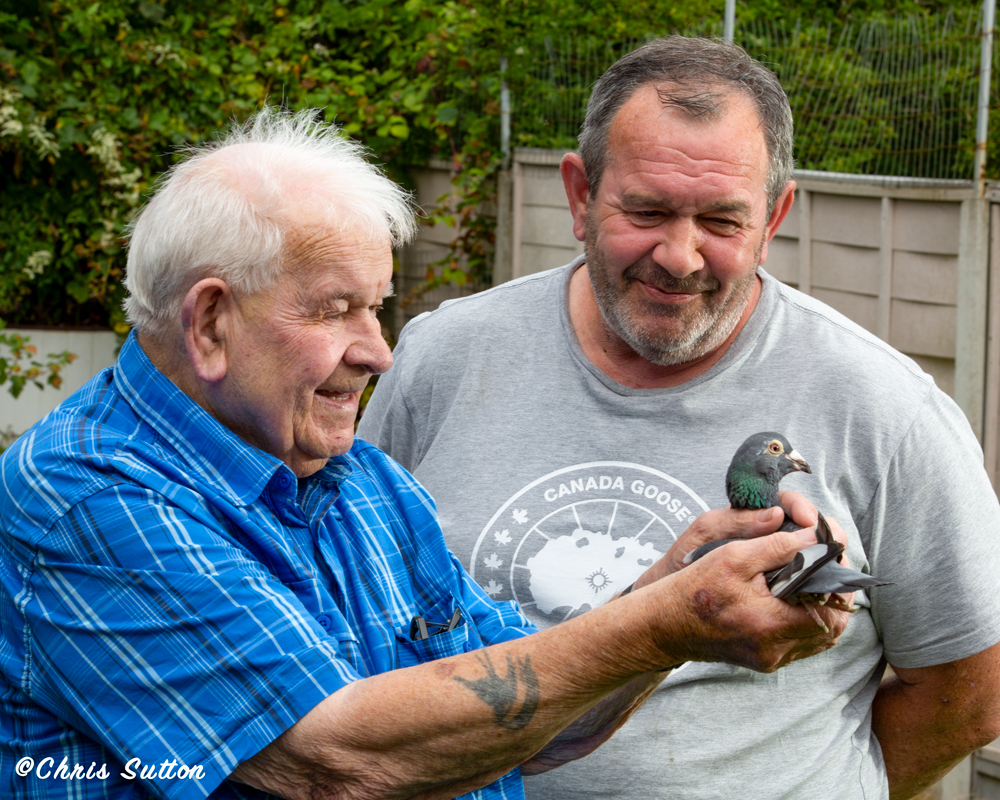 Early this season she has been raced on roundabout in the club where she has been steadily building up fitness and on the 18th of June competed in the NFC Guernsey where once again she returned in darkness at 10:25pm. She was then paired up with her partner, given a few short training tosses and sent to Pau sitting very tightly on 15 day old eggs. Her sire was bred by Jimmy Bauress which they bought at a Liverpool Classic Club sale and is a son of Jimmy’s pigeon which flew 600 miles three times from Bordeaux with the MNFC, and nearly every pigeon in the Pendleton loft now carries this bloodline alongside Ron’s old Jan Aarden family. The dam of “Sheila’s Wings” is from this well established distance family and as a yearling won 1st Club 4th Liverpool Amal from Carentan. As a two year old she returned from a MNFC race with a damaged wing so was put to stock and as well as 1st Open NFC Grand National, she has bred many prize winners including 8th west section MNFC Ancenis. 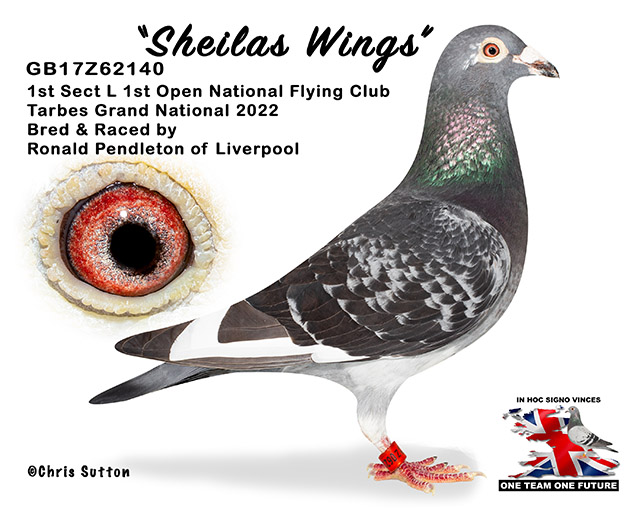 Ron said she returned from the race in excellent condition, and he would like to thank the NFC and RPRA for the opportunity to race from the channel again. He has had a tough couple of years since losing his wife and his own health has not been great, but this win has put a huge smile on his face and as he has always been focused on the distance races he is already looking forward to the next season. Whilst I was visiting the Pendleton lofts, lifelong friend Alan Jones dropped by to congratulate Ron and he reminded me of all the great social events we can look forward to as soon as the young bird season is over, with the National Flying Club presentation on the 3rd of December being one of the biggest. See you there Ron. 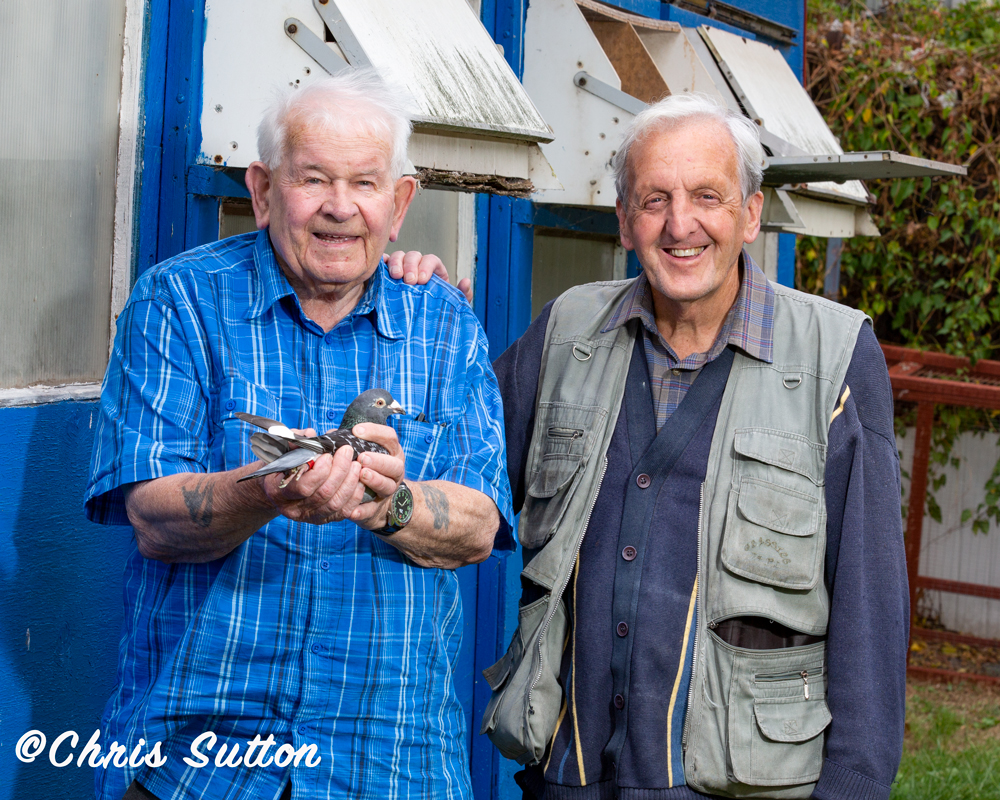